Over the last few days I have heard the riots in Washington DC and the storming of the Capitol being compared to Kristallnacht. Although I can understand the emotions and sentiment behind that comparison and reasoning, it is a totally incorrect assessment of the situation, in fact I would go as far as to say it is actually disturbing because it shows the lack of historical knowledge by some people who should know better. I can understand why someone like Arnold Schwarzenegger wants to put a historical context to it, but in this case that does more damage then good

What happend on January 6th 2021 was an organized group of thugs surrounded by clueless nitwits. They were there to disrupt political proceedings and were encouraged by POTUS Donald J. Trump and some of his cronies and perhaps the mob also had murder in mind. However it did not compare to Kristallnacht.

Kristallnacht was a widescale series pf state sponsored and encouraged criminal acts in Germany and Austria, a pogrom against Jews carried out by SA paramilitary forces and others, with the aim to cause death and destructions to Jews, their places of worship, their homes and their businesses.

Jewish homes, hospitals and schools were ransacked as attackers destroyed buildings with sledgehammers. Over 7,000 Jewish businesses were damaged or destroyed, an estimated 30,000 Jewish men were arrested and sent to concentration camps, at least 91 Jewish people were killed, none of the thugs were killed. On January 6 2021 in DC, 5 people lost their lives, 4 of which were rioters.

Below are just some impression of Krustallnacht and its immediate aftermath.

Comparing the events of January 6, 2021 to the Kristallnacht does a great disservice to the victims and survivors of the Holocaust.

Anyone who reads my blogs knows I try to stay away from current politics as much as possible,But sometimes I have to spek out.

I believe in everyone’s right in freedom of expression, but that will need to hand in hand with an equal amount of responsibility.

When I saw the amount of Nazi and Third Reich symbolisms , I believe even 1 is too many, during yesterday’s storming of the Capitol in DC I was diturbed.

During one of the video footages I saw a few people walking around with so called KEK flags, lets just be clear about it and see on what these flags are based on.

Even more disturbingly is the fact there were people doing the Nazi salute.

For all you you Trump supporters, you will have to ask yourself the question “Do I want to be associated with these Neo Nazis ?”

Only you can answer that.

There are several things that amaze me in the story of this man. Firstly even though I have read a lot about the Holocaust I had never heard of him, his name was pointed out to me by an acquaintance.

Secondly he actually lived in Ireland for three years after the war, from 1946 to 1949. Although initially I only had seen a mention of this on Wikipedia which wasn’t enough for me to take as gospel truth, but I came across an article posted by the Lithuanian Embassy in Ireland dated the 16th of September 2011, where he was mentioned.

“Lithuanians also felt the helping hand of the Irish during this tragic period of our history when independence was lost. The last Prime Minister of independent Lithuania Kazys Škirpa was cordially received in Ireland, and Dublin was home to the famous Lithuanian statesman from 1946 to 1949.”

Thirdly ,after Dublin he emigrated to the United States. He worked at the Library of Congress. In 1975 his memoir book about the 1941 independence movement was published. Originally interred in Washington, D.C,where he died on August 18 1979,unpunished for his crimes.

Kazys Škirpa (born February 18, 1895, Namajūnai, Kovno Governorate, Lithuania – August 18, 1979, Washington DC) was a Lithuanian military officer and diplomat. He is best known as the founder of the Lithuanian Activist Front (LAF) and his involvement in the attempt to establish Lithuanian independence in June 1941. His legacy is controversial due to LAF’s anti-Semitic policies and later collaboration in the Holocaust

During World War I he was mobilized into the Russian army and attempted to form Lithuanian detachments in Petrograd. After Lithuania declared independence in 1918, he returned and volunteered during the Lithuanian Wars of Independence. In 1920, as a member of the Lithuanian Peasant Popular Union, he was elected to the Constituent Assembly of Lithuania. After that he decided to pursue military education in Institute of Technology in Zurich, Higher Military School in Kaunas, and Royal Military Academy (Belgium). Upon graduation in 1925, he worked as chief of the General Staff, but was forced to resign after the 1926 Lithuanian coup d’état, because he was actively refusing it and was trying to gather military force to protect the Government.

Later he served as a Lithuanian representative to Germany (1927–1930), League of Nations (1937), Poland (1938), and again Germany (1938–1941). After Soviet Union occupied Lithuania in 1940, Škirpa fled to Germany and formed the anti-Semitic and anti-Polish Lithuanian Activist Front, a short-lived resistance organisation whose goal was to liberate Lithuania and re-establish its independence by working with the Nazis.

(Skirpa in the middle of the picture) 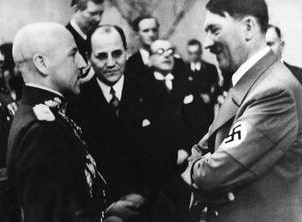 When Nazis invaded the Soviet Union in June 1941, LAF cooperated with the Nazis and killed many Lithuanian Jews .

He was named Prime Minister in the Provisional Government of Lithuania, however Germans placed him under house arrest and did not allow him to leave for Lithuania.

From Berlin he moved to southern Germany and was allowed a short visit to Kaunas only in October 1943.In June 1944, he was arrested for sending a memorandum to the Nazi officials asking to replace German authorities in Lithuania with a Lithuanian government. He was first imprisoned in a concentration camp in Bad Godesberg and in February 1945 moved to Jezeří Castle.

The Lithuanian Central State Archives have made available digital copies of Kazys Škirpa’s (1895-1979) original memoir, “Fight! Efforts to Rescue Lithuania” (Kovok! Pastangos gelbėti Lietuvą), along with 110 documents which he references. These works detail his efforts from June 1940 to July 1942 to free Lithuania from Soviet-occupation and establish its independence as a New Lithuania within the context of Hitler’s New Europe. They make clear that ethnic cleansing of Jews from Lithuania was a high priority for Škirpa from July 1940 (when he submitted his first proposals to Nazi strategist Peter Kleist) to May 1941 (when he honored requests from Lithuania not to send any more literature). Škirpa’s correspondence with Lithuania’s diplomats shows that Stasys Lozoraitis and Petras Klimas supported his plans for ethnic cleansing.

Below are some English translations of the memoirs

Therefore the Lithuanian Activist Front, restoring a new Free and Independent Lithuania, in the name of the entire Lithuanian nation ceremoniously and irrevocably declares that:

Kazys Škirpa imagined that the Nazi German air force could drop this and other leaflets at the start of the war and thus incite Lithuanians to rebel. He first proposed this on July 13, 1940 to Nazi party strategist Peter Kleist of Dienststelle von Ribbentrop. Škirpa includes “Raus die Juden aus Litauen” (Jews, get the hell out of Lithuania) as one of the proposed leaflets in his strategic plan which he submitted to Kurt Graebe of the Military High Command (OKW) on January 25, 1941. Bronys Raila wrote between 11 and 19 (“keliolika”) leaflets for Kazys Škirpa and this might well have been one of them. Kazys Škirpa submitted the completed leaflet on April 28 to OKW, on May 10 to Dienststelle von Ribbentrop, and on May 12 to Kurt Graebe. He also shared it with his fellow Lithuanian diplomats along with his letter to Stasys Lozoraitis (Rome, Italy) dated April 7, 1941, with a copy to Edvardas Turauskas (Bern, Switzerland), and a request that the latter acquaint Petras Klimas (Vichy, France), Jurgis Šaulys (Lugano, Switzerland) and Albertas Gerutis (Bern, Switzerland). Škirpa also shared their correspondence and documents in Berlin with Ernestas Galvanauskas, who the ambassadors settled on as the chairman of their Lithuanian National Committee.

After the war, he went to Paris and from there to Dublin where he taught Russian language at a University. It is unclear which one but it’s more then likely Trinity College because that is the only University in Dublin with a Russian department.

In 1949, he emigrated to the United States. He worked at the Library of Congress. In 1975 his memoir book about the 1941 independence movement was published. Originally interred in Washington, D.C., his remains were returned to Kaunas in June 1995, where he was reburied in Petrašiūnai Cemetery. 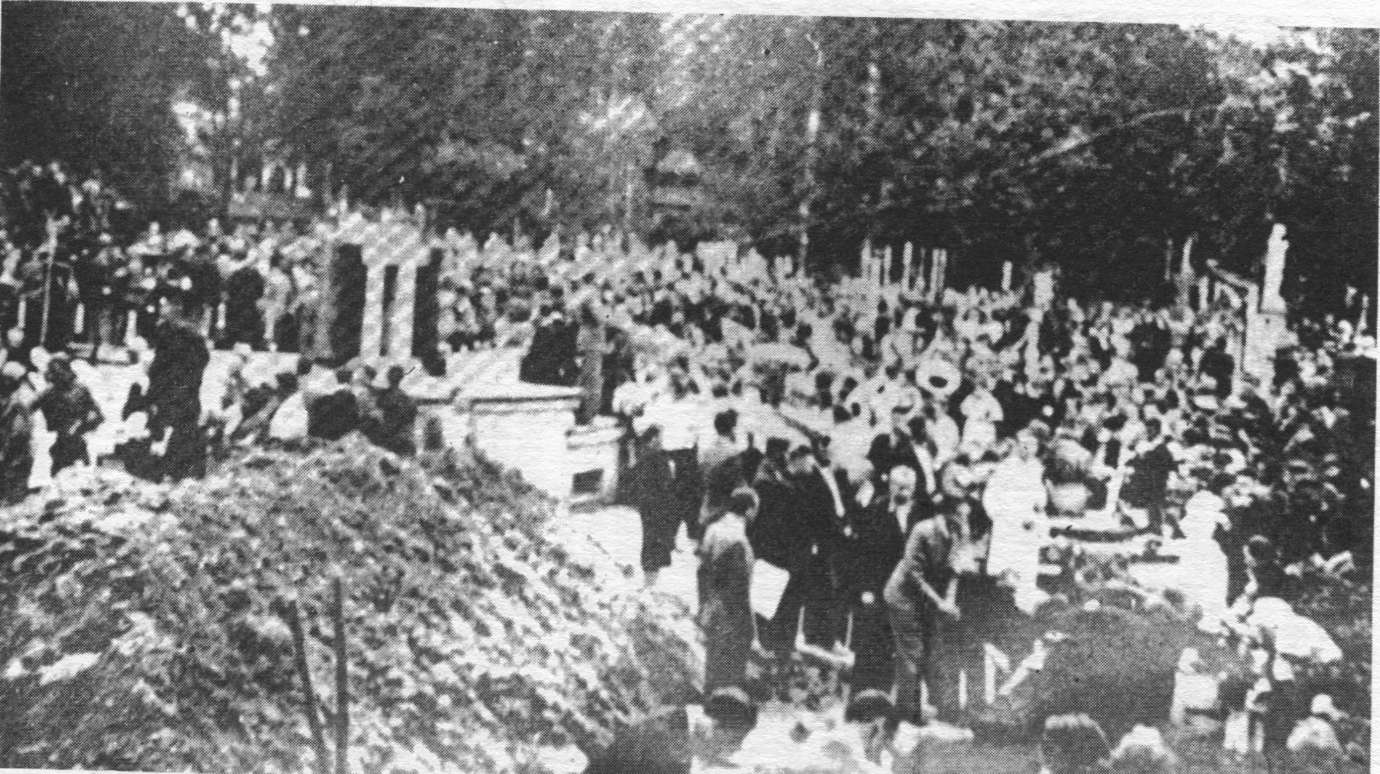