In January 1942, Kenesaw Mountain Landis (1866-1944), the national commissioner of baseball, wrote a letter to President Roosevelt in which he asked if professional baseball should shut down for the duration of the war. 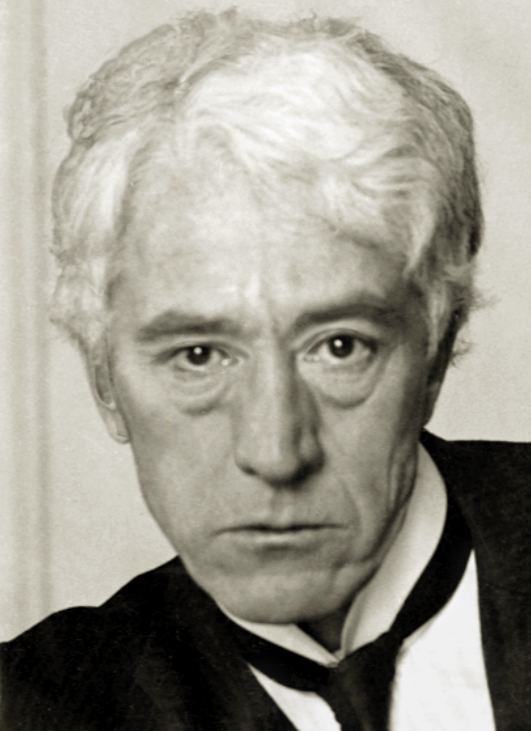 In what came to be known as the “green light” letter, Roosevelt responded that professional baseball should continue operations, as it was good for the country’s collective morale and would serve as a needed diversion. 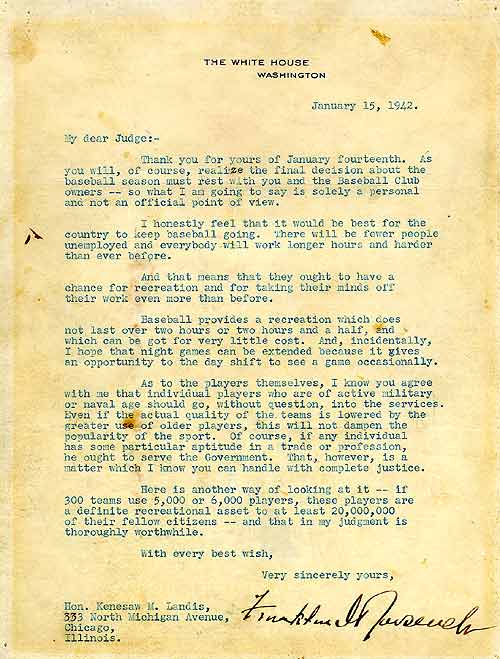 During the war, 95 percent of all professional baseball players who donned major league uniforms during the 1941 season were directly involved in the conflict. Future Hall of Famers Bob Feller (1918-), Hank Greenberg (1911-86), Joe DiMaggio (1914-99) 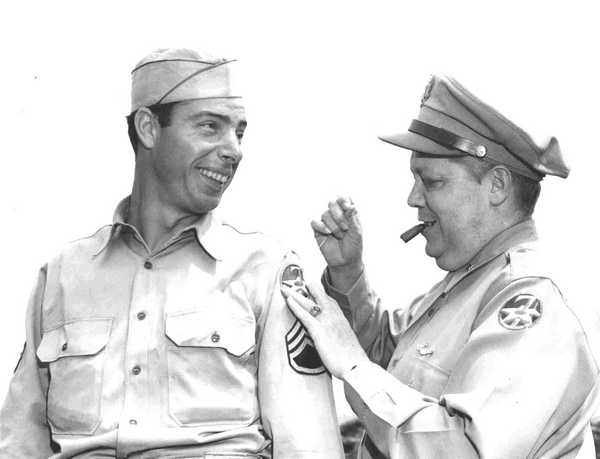 and Ted Williams (1918-2002) exchanged their baseball jerseys for military fatigues. Feller, in fact, enlisted in the U.S. Navy one day after Pearl Harbor. Because baseball was depleted of so many able bodies, athletes who otherwise likely never would have made the big leagues won spots on rosters. One of the more notable was Pete Gray (1915-2002), a one-armed outfielder who appeared in 77 games for the St. Louis Browns in 1945. 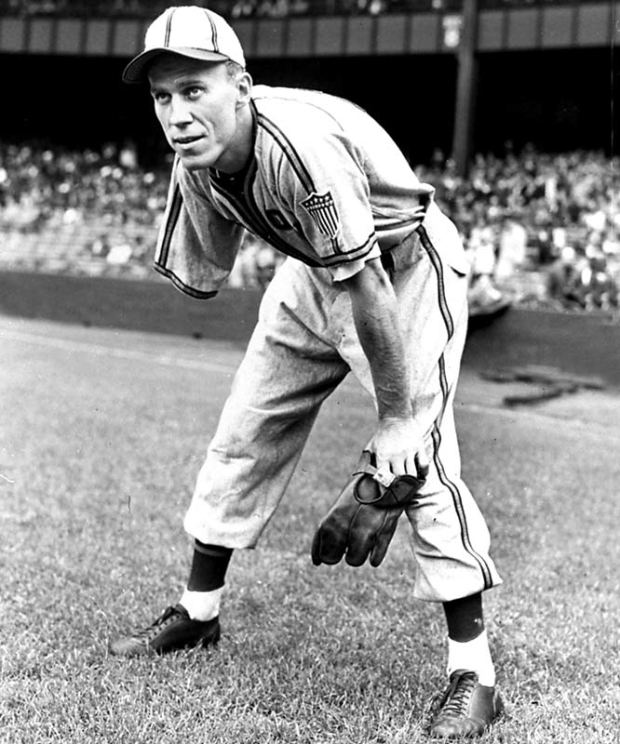 By June 1942 more than 41,205 American military personnel were stationed in Northern Ireland, and with the Americans came American culture, from bubble gum and candy to big bands and, of course, baseball. The build-up was an impressive display of American efficiency, but one obstacle, unforeseen by military high command, was causing a dilemma.

In a country where similarities with home seemed to end with the language, troops became desperately homesick. Daily training left them restless, agitated and suffering low morale. Something was needed to prevent the worsening of an already difficult situation.

It was evident that a competitive sports program could help improve matters, and team games of basketball and soccer, combined with track and boxing, went a long way to make amends. But America ‘s national pastime – baseball – had by far the greatest impact on morale.

The first recorded baseball game took place near Belfast on Saturday, April 25, 1942. Despite overcast, blustery conditions, the 2nd and 3rd Battalions of the 133rd Infantry Regiment, 34th Infantry Division, attracted an inquisitive crowd of more than 1,000 locals who were treated to a play-by-play account over a public address system, a concert by the regiment band, and an impromptu jitterbug demonstration on the sidelines.

Major General Russell P Hartle, acting commander of the US Army Northern Ireland Force (USANIF), was invited to throw out the first pitch, and with all the fanfare of a major league opening day, baseball had arrived in Northern Ireland .

Pitching for the winning 3rd Battalion in the 14-4 game was Corporal Robert Lange of Wilton Junction, Iowa. 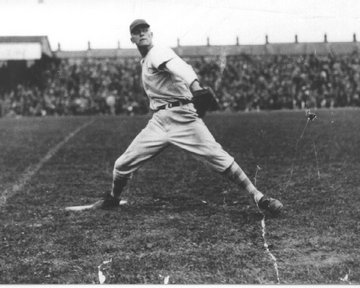 a 21-year-old right-hander who was a member of the Cleveland Indians’ farm system and had an 8-4 won-loss record with the Flint Arrows of the Michigan State League in 1940. In the sixth inning, Corporal Leo J Robinson, a 24-year-old outfielder from Harper’s Ferry, Iowa , hit a solo home run for the winning team. It was the first home run hit in Europe by an American serviceman in World War II. “[Robinson] was well known as a semi-professional player prior to World War II,” explains his son, Stephen L Robinson. “He was an outstanding hitter and pitcher in high school and was offered a professional contract from the Crookston, Minnesota , baseball team of the Northern League in 1936, but he turned it down because the family was suffering greatly as a result of the Depression and he could make more money working in the Civilian Conservation Corps.”

Neither team had uniforms, equipment was scarce, and a soccer field, without a backstop or pitcher’s mound, served as a diamond for the afternoon. 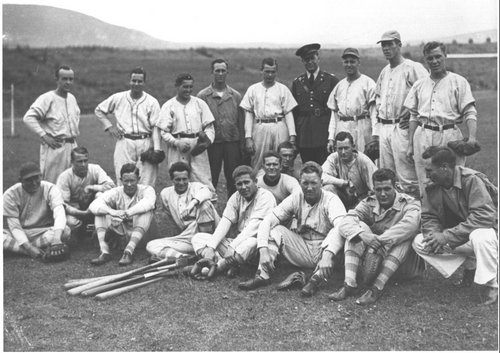 But baseball had arrived, and the troops welcomed it with open arms. With the Army Air Force based at the Combat Crew Replacement Unit at Greencastle in County Down and the Langford Lodge Base Air Depot in Antrim, the Navy at the United States Naval Operations Base (USNOB) in Londonderry, and the Army scattered throughout the island, battalion-level baseball soon flourished on the Emerald Isle.

In July 1942, 34th Infantry and 1st Armored division all-stars teams were selected to participate in Northern Ireland ‘s first officially recognized baseball game of World War II. The last “official” game had taken place 25 years earlier, on October 31, 1917 , when Canadian and American troops put on an exhibition game for the local people. Staged at Windsor Park , a soccer stadium in Belfast , and a part of the Anglo-American Independence Day celebrations, the local government and American military pulled out all the stops to put on a July 4 spectacle.

Representing the 34th Infantry Division were the Midwest Giants while the 1st Armored Division were represented by the Kentucky Wildcats. It would appear that the Kentucky Wildcats nickname was chosen because the original player line-up featured troops who were predominantly from that state. Indeed, a pre-game press cutting listed the southern-state players. However, for reasons unknown, but probably because the originally selected players were with a military unit that was otherwise indisposed, the Kentucky Wildcats were represented by players mainly from New York and the east coast.