It was  billed as a contest for the heavyweight championship of the world. And yet, by noon on Dec. 2, 1896, with the fight slated to take place that same evening in San Francisco’s Mechanics’ Pavilion, they had the boxers, they had the venue but they didn’t have a referee.

It was the problem promoters J.J. Groom and John Gibbs faced.

The fight was between Fitzsimmons vs. Sharkey it was held to settle a three-year question as to the rightful holder of the gloved (Marquess of Queensberry rules) heavyweight title. Boxing was illegal in San Francisco but that didn’t really matter to  the city officials and police commissioners . they even embraced the bout, Mechanics Pavilion was secured as a venue and more than 10,000 tickets were sold.

Both boxers had an Irish background, Fitzsimmons parents were Irish and Sharkey was a native from Dundalk.

Earp had refereed 30 or so matches in earlier days, though not under the Marquess of Queensbury rules, and he had never refereed a match of national prominence. He was actually hired by The Hearst family, owners of the San Francisco Examiner,  to provide security to their family.  The Examiner, had suggested Earp to Gibbs , he reluctantly agreed because the Fitzsimmons camp had reservations about Earp as referee.  But with no alternative, they finally agreed for Earp to be the referee, knowing that 15,000 people had paid between $2 and $10 for tickets.

Almost immediately after agreeing to Earp, Fitzsimmons’s people heard rumors that Earp had agreed to fix the fight ,with its $10,000 prize for Sharkey, who was a heavy underdog.

Earp had  entered the ring carrying his customary .45 caliber pistol in his coat pocket. Police Captain Charles Whitman, who was at the  ringside, climbed into the ring and demanded Earp hand over his pistol, which Earp promptly complied.

Wyatt Earp awarded the match to Sharkey after Fitzsimmons knocked Sharkey to the mat. Earp ruled that Fitzsimmons had hit Sharkey when he was down, but very few witnessed the purported foul.

The angry  crowd pelted Earp with boos and taunts. He rapidly left the ring and exited the Mechanics Pavilion. But his troubles were far from over

.For weeks, fans and sportswriters who said they had never seen a below belt punch mocked the decision. Fitzsimmons’s attorney, HL Kowalsky, told the San Francisco Call that Earp’s ruling was: “Clear and dirty theft.” 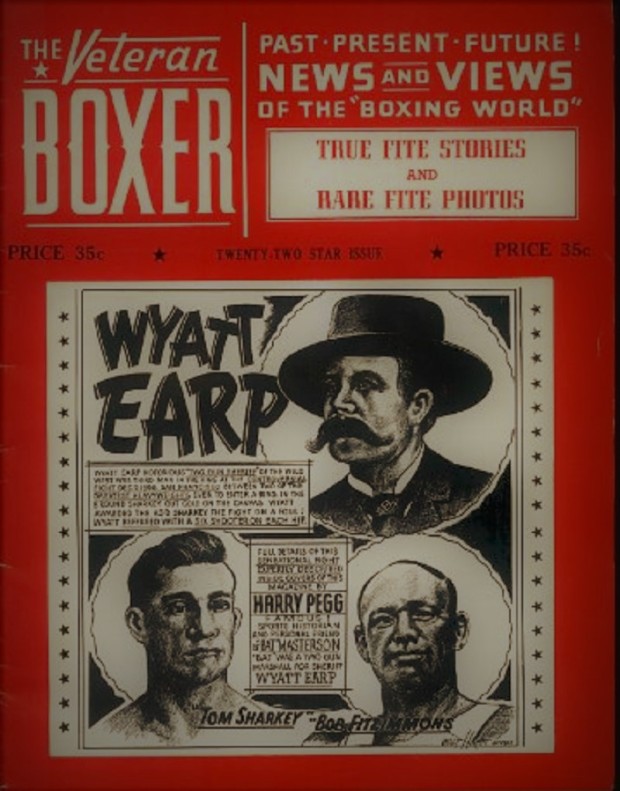