Something I just can’t get my head around is that in this day and age there are still people the Holocaust ever happened. It sickens me to the core.

In an era where we should educate future generation about the Holocaust and other genocides, history is disappearing from the education curriculum in many countries. The fact is that when we forget history , we forfeit our future.

Below are some photographs which come from the Truman Library, they are all photographic evidence of the Holocaust, and even with that some people will say that they are fake and that perhaps I photo shopped them, to be honest I would be too lazy to do that.

I don’t really like posing disturbing pictures because they disturb me too, but sometimes the reality needs to be shown a graphic manner.

These are examples of photographic evidence taken at the time of liberation or shortly afterwards.

German civilians of Weimar witness a truckload of prisoners dead at Buchenwald concentration camp. The civilians were forced by the U.S. Third Army Military Police to witness evidence of atrocities at the camp.

Physical evidence of malnutrition in one of the prisoners murdered by fleeing Nazis before the Ohrdurf concentration camp was captured by Third Army troops. 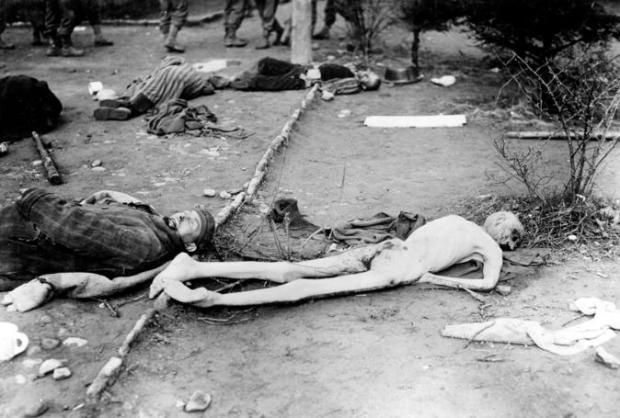 In a large barn just at the edge of Gardenlegen, Germany, political prisoners were burned to death by S. S. troops in an attempt to remove “evidence” in the face of the advancing Allied forces. The 9th U S Army troops captured the Gardenlegen area before the Germans had time to bury all the dead.

These emaciated, nude corpses, stacked like cord-wood in a bin at the concentration camp at Gotha, Germany were strewn with quicklime in a hap-hazarded attempt to destroy evidence. 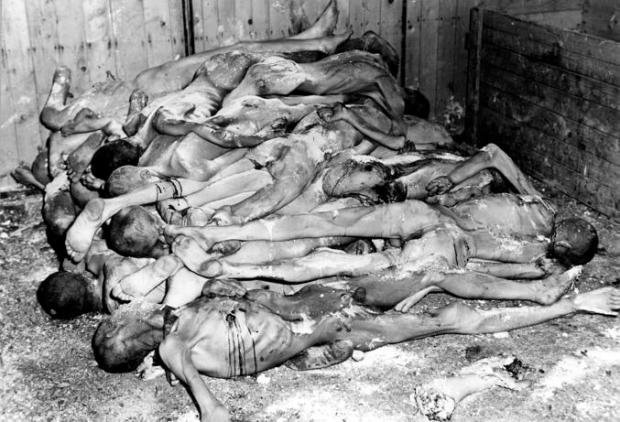 I don’t know the origin of the last picture. It portrays a child survivor of the holocaust. She was asked to draw “home” she drew  scribbles and random lines. It illustrates how the horrors of the concentration camp affected her mind. Chaos is probably the best way to describe the drawing, but more the the drawing, her eyes tell a more chilling story.

Another remind how cruel humanity can be.

Dead inmates discovered in the concentration camp at Buchenwald after its liberation on April 11 by the U.S. 6th Armored Division. An estimated 56,000 victims had been murdered at Buchenwald and its subcamps.

At a Belgian crossroads in the early hours of the battle of the Bulge, German soldiers strip boots and other equipment from three dead GIs. After U.S. troops captured this film, an Army censor redacted the road sign to Büllingen and other landmarks. 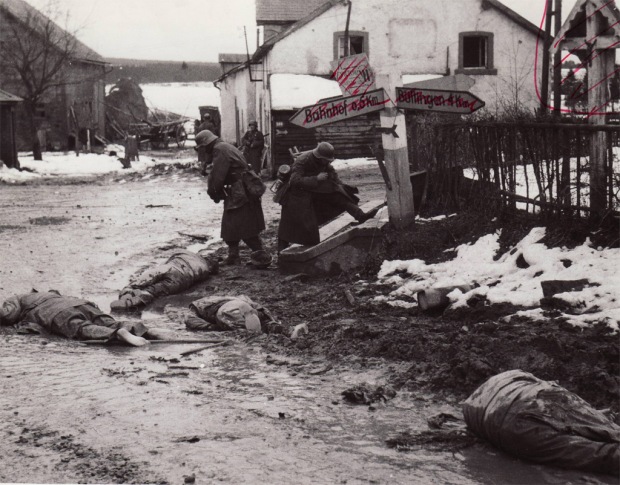 A boy’s body burns after a V-2 rocket explosion in central Antwerp in late November 1944. German launch crews would fire more than 1,700 V-2s at Antwerp during a six-month period, in addition to some 4,200 V-1 flying bombs.

A bugler blows Taps at the close of Memorial Day ceremonies in May 1945 at the U.S. military cemetery at Margraten, the Netherlands.

A German soldier shoots at a Jewish woman after a mass execution in Mizocz, Ukraine. In October of 1942, the 1,700 people in the Mizocz ghetto fought with Ukrainian auxiliaries and German policemen who had intended to liquidate the population. About half the residents were able to flee or hide during the confusion before the uprising was finally put down. The captured survivors were taken to a ravine and shot.

A U.S. soldier inspects thousands of gold wedding bands taken from Jews by the Germans and stashed in the Heilbronn Salt Mines, on May 3, 1945 in Germany

Lt. Col. Ed Seiller of Louisville, Kentucky, stands amid a pile of Holocaust victims as he speaks to 200 German civilians who were forced to see the grim conditions at the Landsberg concentration camp, on May 15, 1945 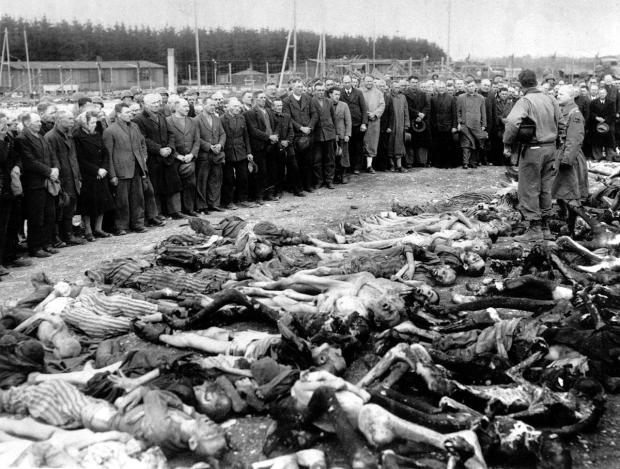 Women and children prior to being sent to the gas chambers, May 1944

American and German dead await burial in a makeshift morgue behind Omaha Beach. The 4,700 U.S. casualties at Omaha, including wounded and missing, accounted for more than one-third of the Allied total on D-Day.

A German V-1 flying bomb plummets to earth above a London rooftop. More than ten thousand of the crude weapons were fired at Britain, killing or badly injuring 24,000 people; thousands more V-1s fell on Antwerp 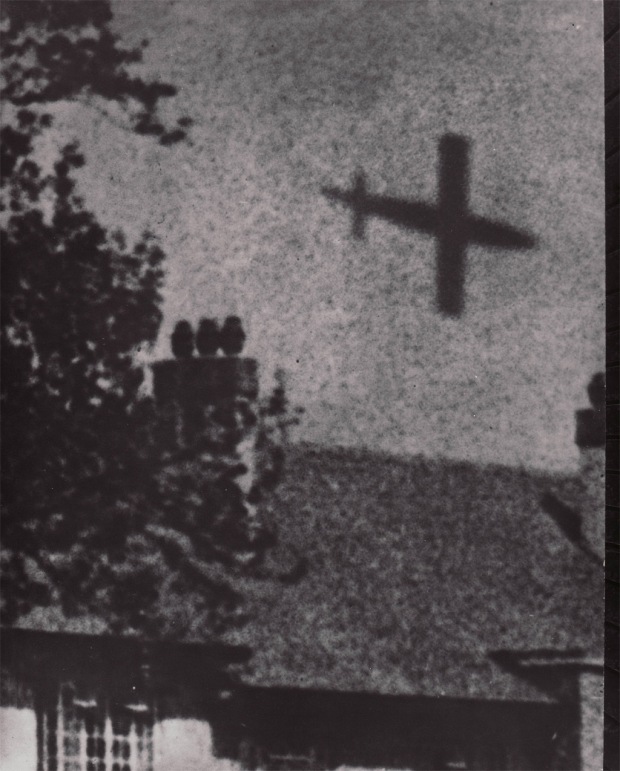 Sniper fire sends French citizens sprawling or fleeing in the Place de la Concorde on August 26, 1944. “It was like a field of wheat suddenly struck by a strong gust of wind,” wrote one witness.

By late September 1944, the once-handsome Dutch town of Nijmegen had been reduced to ruins, although the road bridge leading toward Arnhem, ten miles north, still spanned the Waal river.