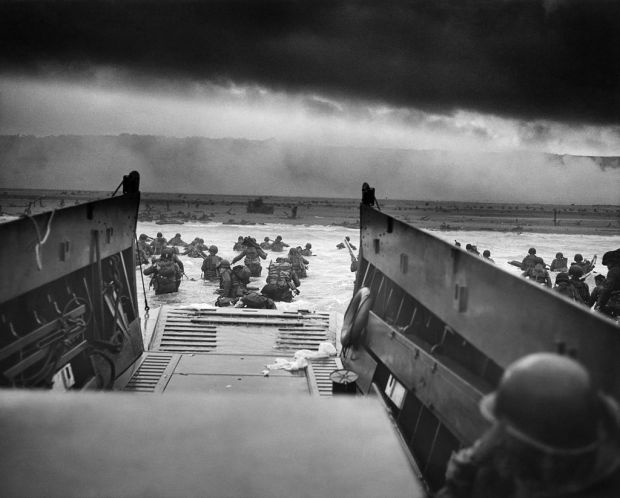 Codenamed Operation Overlord, the battle began on June 6, 1944, also known as D-Day, when some 156,000 American, British and Canadian forces landed on five beaches along a 50-mile stretch of the heavily fortified coast of France’s Normandy region. The invasion was one of the largest amphibious military assaults in history and required extensive planning.

Rather then having an extensive text on the day I am opting to post pictures of D-Day and the days after, for there is nothing I can write which hasn’t been written before. 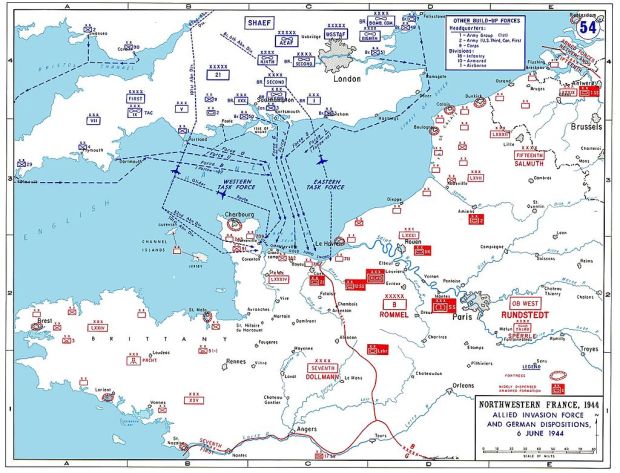 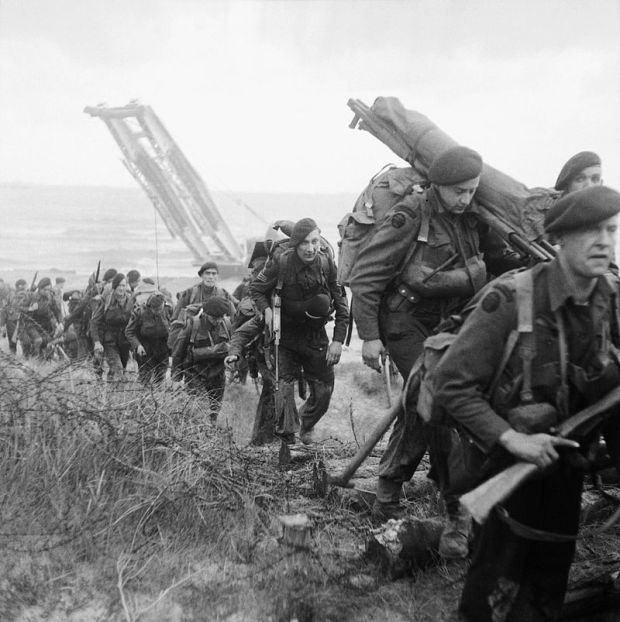 Members of the French Resistance and the U.S. 82nd Airborne division discuss the situation during the Battle of Normandy in 1944. 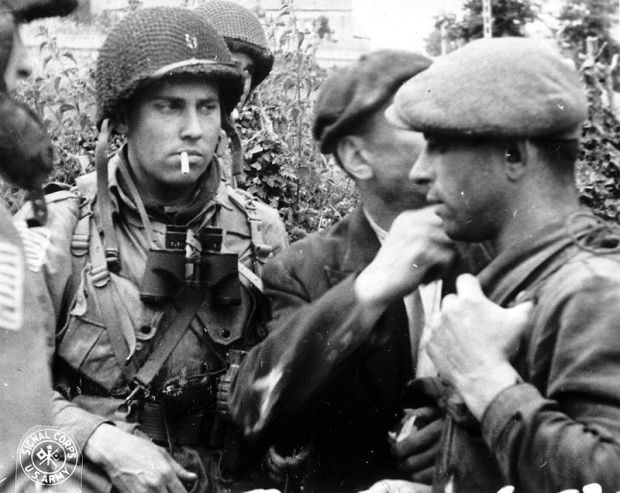 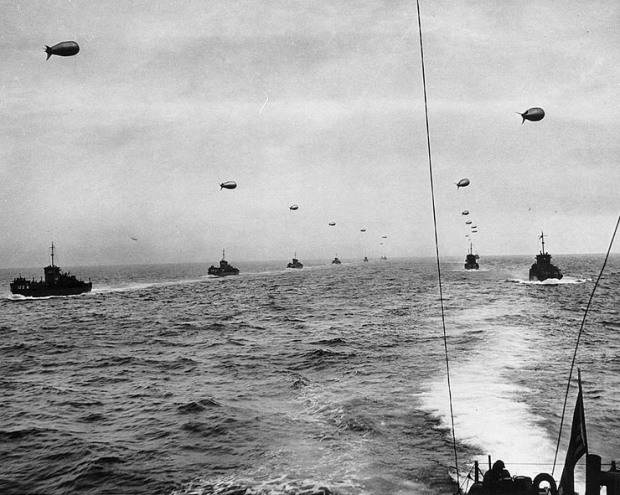 Troops of the US 7th Corps wading ashore on Utah Beach. 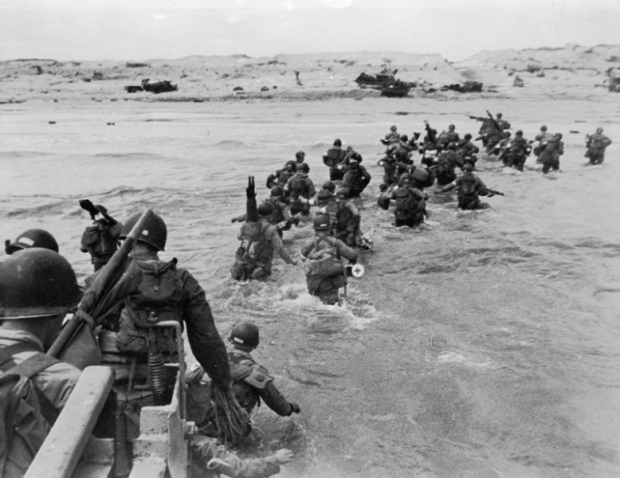 U.S. Gen. Dwight D. Eisenhower, the supreme Allied commander, talks with men of the 101st Airborne Division at the Royal Air Force base in Greenham Common, England on June 6, 1944, before they joined the D-Day invasion. 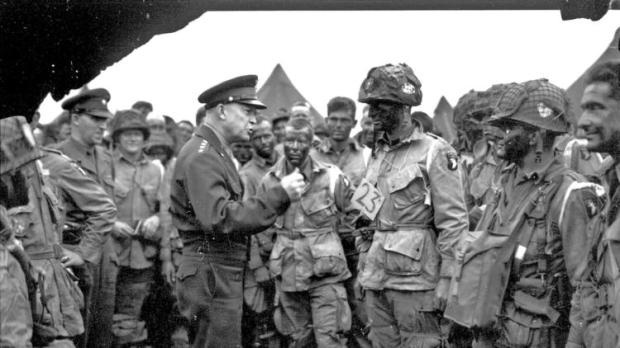 Gliders are delivered to the Cotentin Peninsula by Douglas C-47 Skytrains. 6 June 1944. 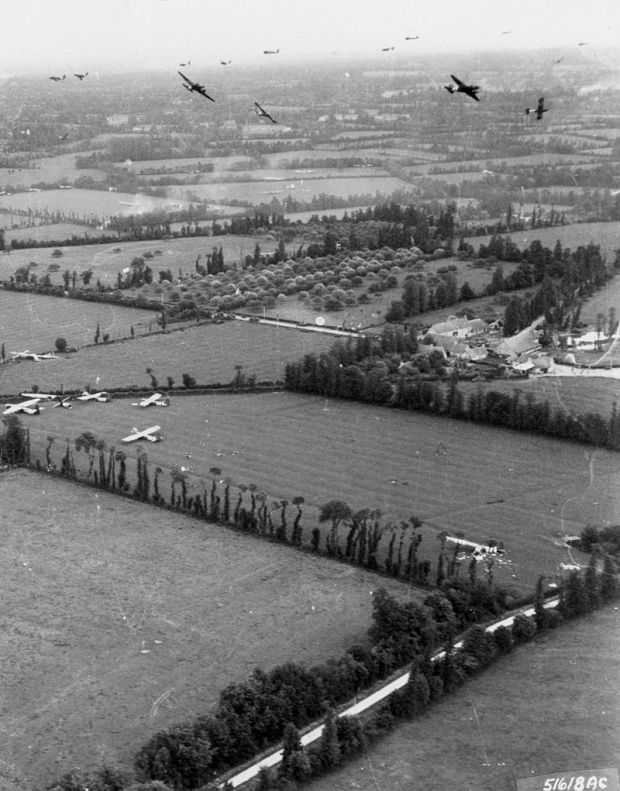 An abandoned Waco CG-4 glider is examined by German troops 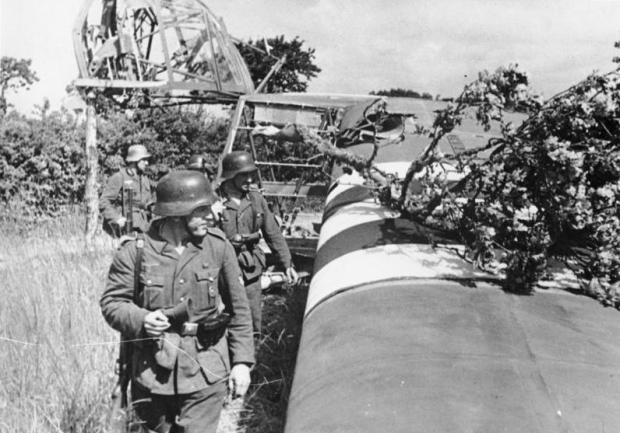 Carrying their equipment, U.S. assault troops move onto Utah Beach. Landing craft can be seen in the background. 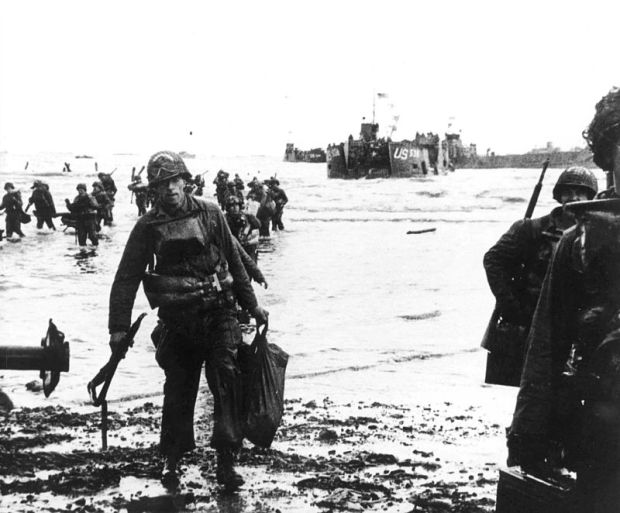 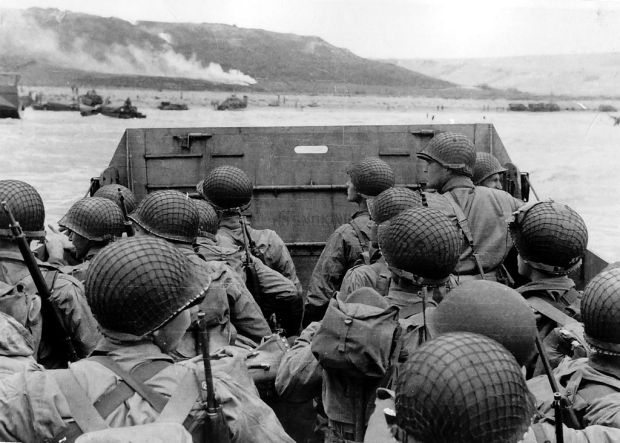 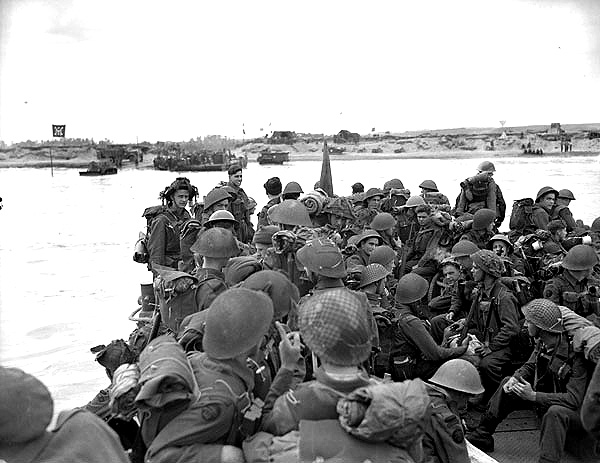 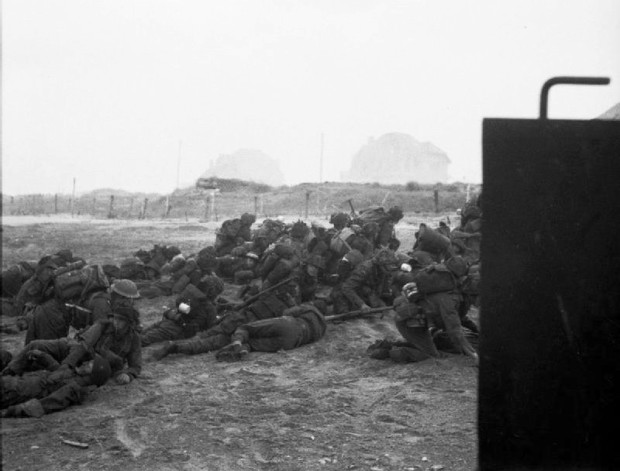 Crossed rifles on the sand are a comrade’s tribute to this American soldier who sprang ashore from a landing barge and died at the barricades of Western Europe. Picture taken a few days after D-Day, on Omaha Beach. 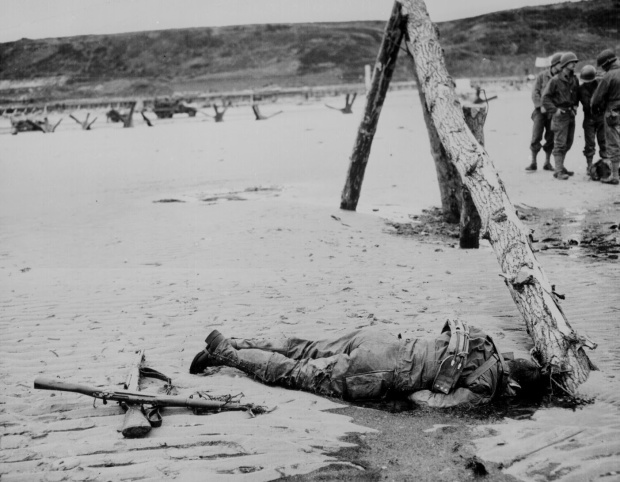 The Bény-sur-Mer Canadian War Cemetery, September 2006. The cemetery contains predominantly Canadian soldiers killed during the Battle of Normandy. The cemetery contains 4 British soldiers and one French national who was killed fighting alongside Canadian troops. The British soldiers have markers very similar to the Canadian markers, but with different insignia in place of the maple leaf. The grave containing the French national is marked with a cross, which is visible on the lower left of the photo in the 4th row from the bottom. 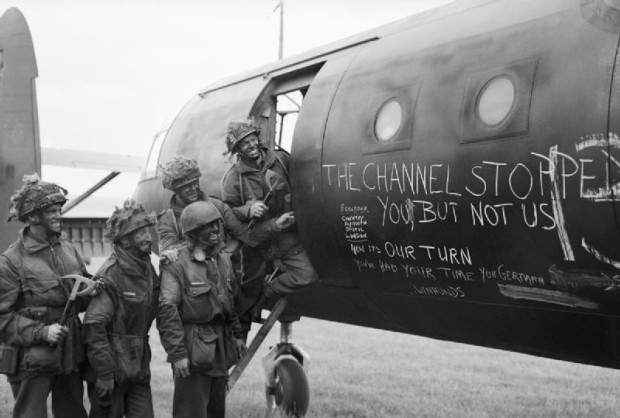 Operation Tonga was the code name given to the airborne operation undertaken by the British 6th Airborne Division between 5 June and 7 June 1944 as a part of Operation Overlord and the D-Day landings during the Second World War. 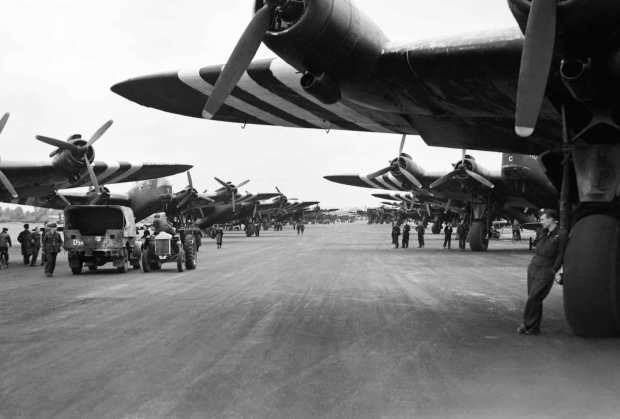 The paratroopers and glider-borne airborne troops of the division, commanded by Major-General Richard Nelson Gale, landed on the eastern flank of the invasion area, near to the city of Caen, tasked with a number of objectives. 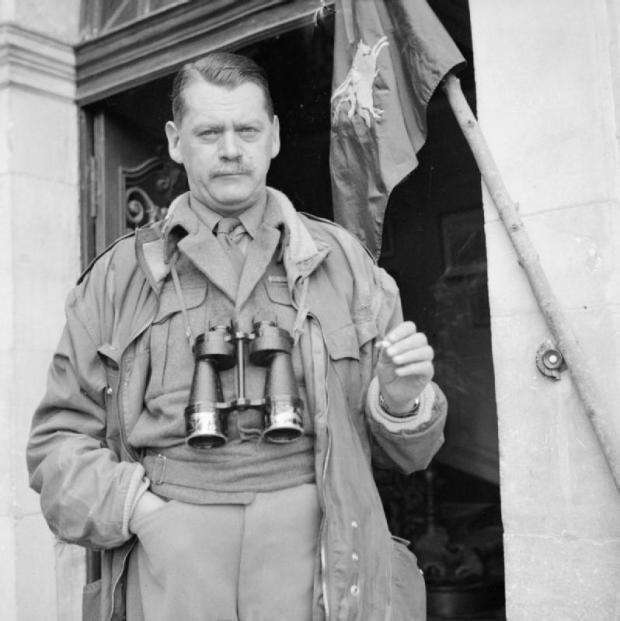 The division was to capture two strategically important bridges over the Caen Canal and Orne River which were to be used by Allied ground forces to advance once the seaborne landings had taken place, destroy several other bridges to deny their use to the Germans and secure several important villages.

The division was also assigned the task of assaulting and destroying the Merville Gun Battery, an artillery battery that Allied intelligence believed housed a number of heavy artillery pieces, which could bombard Sword Beach and possibly inflict heavy casualties on the Allied troops landing on it. Having achieved these objectives, the division was then to create and secure a bridgehead focused around the captured bridges until they linked up with advancing Allied ground forces. 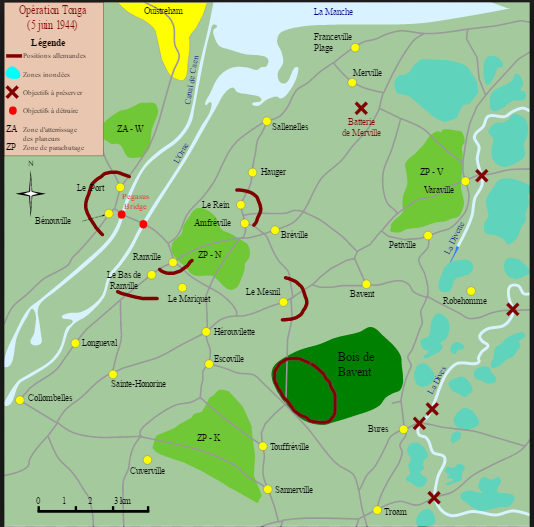 The division suffered from a combination of bad weather and poor pilot navigation which caused many of the airborne troops to be dropped inaccurately throughout the divisional operational area, causing a number of casualties and making conducting operations much more difficult. In particular, the 9th Parachute Battalion, which was assigned the task of destroying the Merville artillery battery, was only able to gather up a fraction of its strength before it had to attack the battery, with the result that the depleted force suffered a number of casualties. 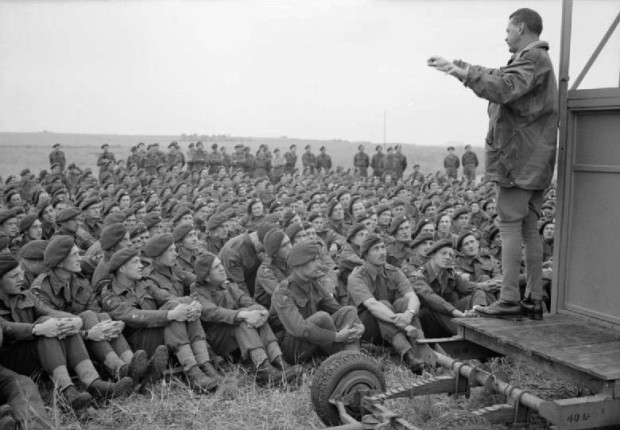 However, the battery was successfully assaulted and the guns inside it disabled, and the division’s other objectives were also achieved despite the problems encountered. A small force of glider-borne troops of The Oxfordshire and Buckinghamshire light Infantry secured the two bridges over the Caen Canal and River Orne, the other bridges were destroyed, and a number of towns were occupied. 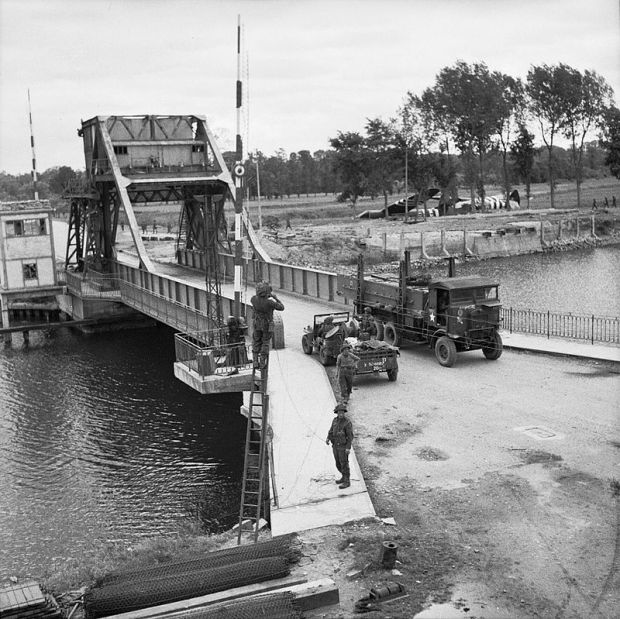 A bridgehead was formed by the division, and it successfully repulsed a number of German counter-attacks until Allied ground forces from the invasion beaches reached its positions. The actions of the division severely limited the ability of the German defenders to communicate and organise themselves, ensuring that the seaborne troops could not be attacked during the first few hours after landing when they were most vulnerable. 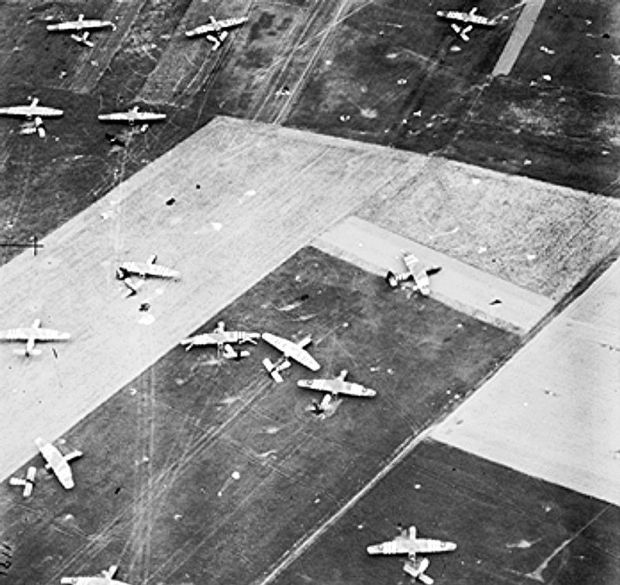 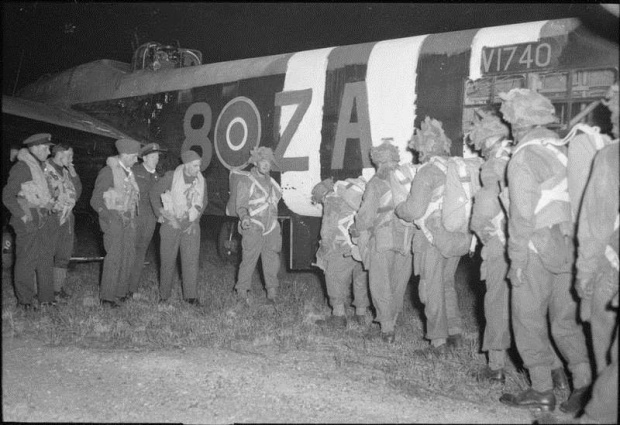 Light Infantry reinforced with two extra platoons from B Company and a party of sappers, who were tasked with capturing the bridges over the Caen Canal and the River Orne. A few minutes later, between 23:00 and 23:20, six Armstrong Whitworth Albemarle transports took off carrying pathfinders of the 22nd Independent Parachute Company, who were to mark the three drop-zones to be used by the airborne troops of the division.Another sixteen Albemarles followed the transports carrying the pathfinders, these transporting elements of the 9th Parachute Battalion, 1st Canadian Parachute Battalion and 3rd Parachute Brigade Headquarters. After this small group, the remainder of the transports carrying 6th Airborne Division began to take off thirty minutes after the pathfinders, this ‘lift’ being divided into three groups. The first consisted of 239 Douglas Dakota and Short Stirling transports and seventeen Horsa gliders carrying the bulk of the 3rd and 5th Parachute Brigades and their heavy equipment. These forces were due to land in their respective drop-zones at 00:50.[27] The second part of the lift was destined to land at 03:20 and consisted of sixty-five Horsa and four Hamilcar gliders transporting 6th Airborne Division headquarters and an anti-tank battery. The final part of the lift was formed of three Horsa gliders carrying sappers and men from the 9th Parachute Battalion, who were to land atop Merville Battery at 04:30.A second ‘lift’ of 220 Horsa and Hamilcar gliders carrying the 6th Air-landing Brigade and other units were to land at another drop-zone at 21:00.

Below some further pictures of Operation Tonga 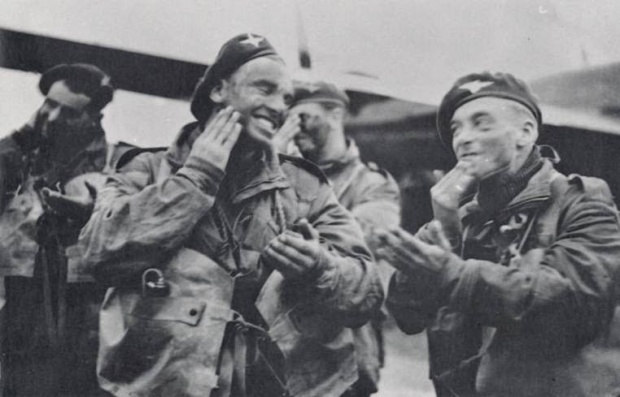 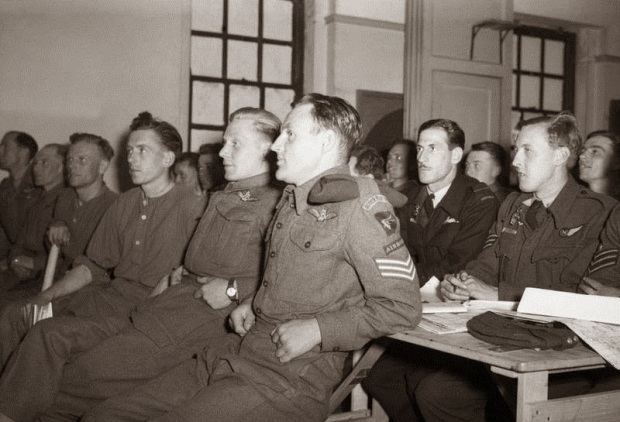 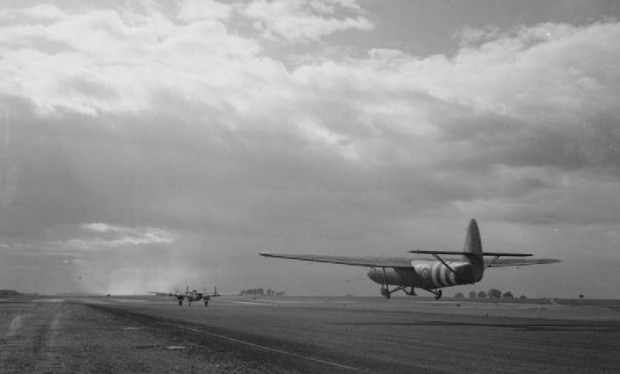 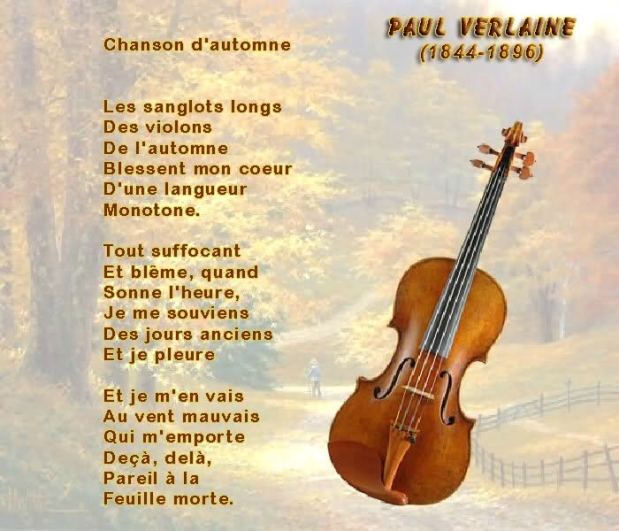 “Chanson d’automne” (“Autumn Song”) is a poem by Paul Verlaine, one of the best known in the French language. It is included in Verlaine’s first collection, Poèmes saturniens, published in 1866 (see 1866 in poetry). The poem forms part of the “Paysages tristes” (“Sad landscapes”) section of the collection.

In World War II lines from the poem were used to send messages to the French Resistance about the timing of the forthcoming Invasion of Normandy. 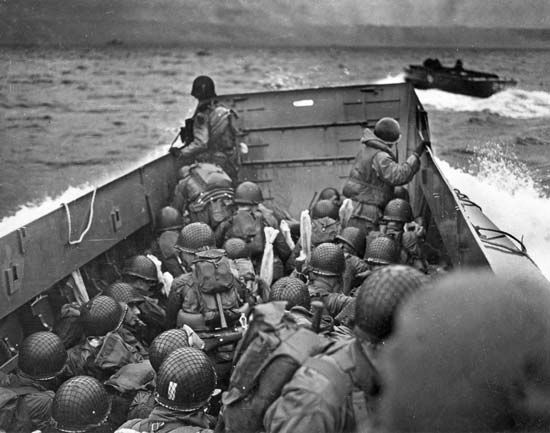 In preparation for Operation Overlord, the BBC had signaled to the French Resistance that the opening lines of the 1866 Verlaine poem “Chanson d’Automne” were to indicate the start of D-Day operations. The first three lines of the poem, “Les sanglots longs / des violons / de l’automne” (“Long sobs of autumn violins”), meant that Operation Overlord was to start within two weeks. 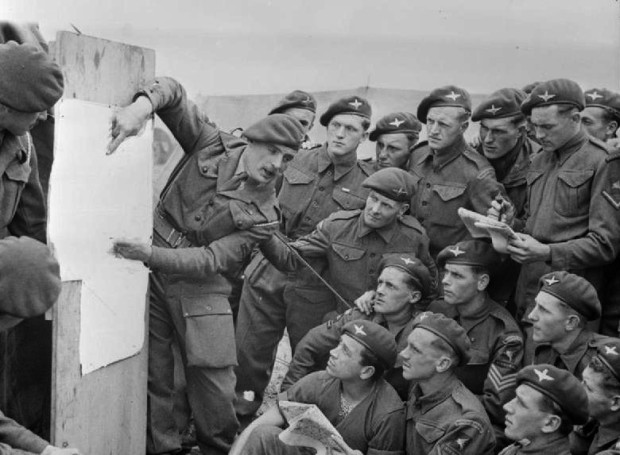 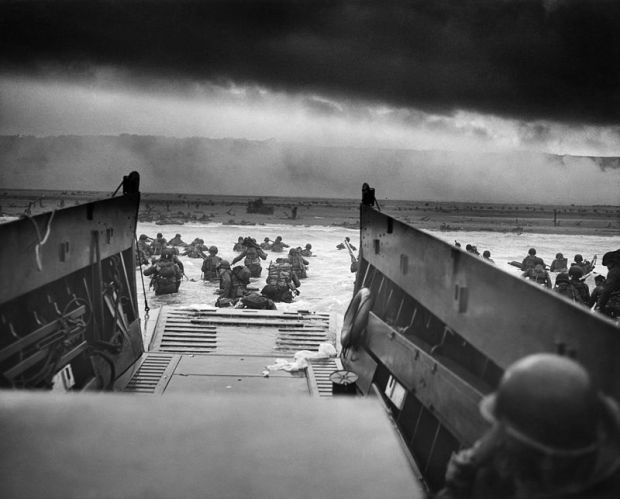