With the passing this week of George Kennedy known from the movie the Dirty dozen, I was wondering if the movie was based on real characters.

The Filthy Thirteen was the name given to the 1st Demolition Section of the Regimental Headquarters Company of the 506th Parachute Infantry Regiment, 101st Airborne Division, of the United States Army, which fought in the European campaign in World War II.

The Demolition Section was assigned and trained to demolish enemy targets behind the lines. They were ordered to secure or destroy the bridges over the Douve River during the Normandy Invasion of Europe in June 1944. Half were either killed, wounded or captured, but they accomplished their mission. They also participated in the capture of Carentan. The group was airdropped for the mission by aircraft of the 440th Troop Carrier Group of the United States Army Air Forces.

This unit was best known for the famous photo which appeared in Stars and Stripes, showing two members wearing Indian-style “mohawks” and applying war paint to one another. The inspiration for this came from unit sergeant Jake McNiece, who was part Choctaw.

The name “Filthy 13” referred to the fact that, while training in England, they washed and shaved once a week and never cleaned their uniforms. 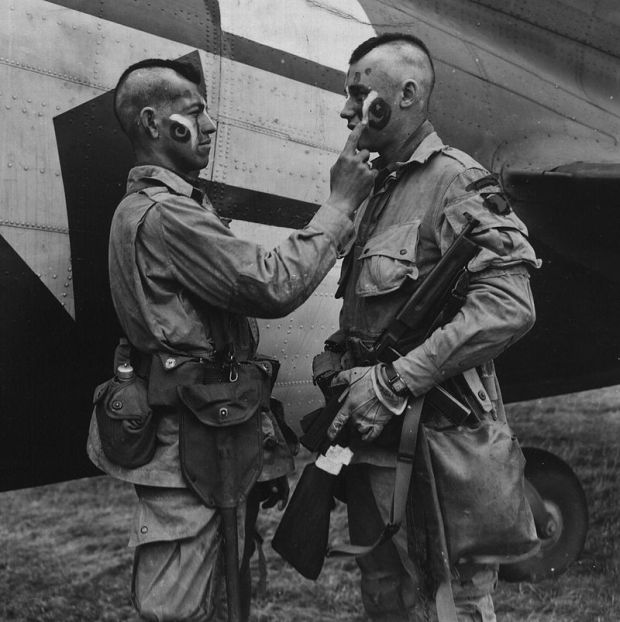 During Operation Market Garden, the Demolition Platoon was assigned to defend the three bridges over the Dommel River in Eindhoven, the Netherlands. German bombing of the city killed or wounded half the demolitions men in the platoon, and McNiece was promoted to platoon sergeant. Jack Womer took his place as section sergeant. For the rest of the campaign, the demolitions men secured the regimental command post or protected wire-laying details. On one occasion, the survivors of the Demolitions Platoon were assigned as a rifle squad to an under strength company.

The leader of this group of renegades was Jack McNiece who only passed away 3 years ago.

Being part-Choctaw Indian, McNiece had an idea how to psyche up his squad for their first combat mission: D-Day.

“When we got ready to jump into Normandy, all of us had scalplocks, we also had our faces painted. It started a fad that is carried on today throughout most airborne units,” he said.

And, like their big screen counterparts, they were better known as malcontents before they were known as heroes.

“We weren’t murderers or nothing,” said Jack Agnew, a former member of the 506th Parachute Regiment, 101st Airborne Division’s Filthy Thirteen. “We just did a lot more than they asked us to do, and we were always getting in trouble for that.”

McNiece said his superiors were constantly bothering him about skipping reveille, so he claimed it violated his mother’s Native American heritage. When they rejected that excuse, he followed up that evening’s retreat ceremony with a drinking binge downtown.

“I ended up beating the MPs with their own nightsticks,” he said. “I spent a few days in the stockade, but they didn’t make me stand retreat again.”

The reason the men got away with some of the questionable behavior was because of their combat skills. 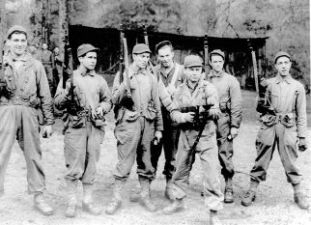 Their specialty was blowing the shit out of bridges and whatever else they figured could go “boom” if they strapped it to enough TNT, which caused a nightmare for the Germans as they tried in vain to fend off the Allied invasion. … Their fearless leader Jake McNiece was part Native-American, and his fellow Filthies chose to honor this by going into battle sporting mohawks like Travis Bickle, and freaking war-paint. … At the age of 23, [McNiece] delivered this nugget of advice from the enlisting officer:

“You may just be 23. I don’t know, but your face and your head looks like it’s been used as practice for hand grenade tossing and wore out three bodies already.”

If that’s not some movie shit, we don’t know what is. Wait, yes we do, this quote from fellow Filthy Thirteener Robert Cone regarding the D-Day mission:

“We landed near a hedgerow, from which the Germans were firing at us, and the guy I was with was killed. I got hit in the right shoulder, which broke my arm all the way down into the forearm. The bullet was lodged in there for a year. I was able to get away, though, but could not hold my rifle.”

I salute these brave men who also fought for my freedom