Not all Concentration camp victims were killed by the Nazi’s the case of the SS Cap Arcona is one of the worst and most tragic cases of’collateral damage’ of WWII by the Allies. Today is the 75th anniversary of the tragic event.

The Cap Arcona was a large German luxury ocean liner formerly of the Hamburg-South America line that was sunk with the loss of many lives when laden with prisoners from concentration camps.The 27,500 gross ton Cap Arcona was launched in 1927, it was considered one of the most beautiful of the time. It carried upper-class travelers and steerage-class emigrants, mostly to South America. In 1940, it was taken over by the Kriegsmarine, the German navy, and used in the Baltic Sea.

An interesting side note regarding the Cap Acrona is that the ship was used in 1943 to produce the German film “Titanic”. The film was essentially a feature length propaganda epic and was the most expensive film produced in Germany up to that time. The film was released in Paris in the winter of 1943 and but was banned shortly after due to it’s depiction of mass death at a time when Germany was being bombed on a regular basis. It wasn’t shown again until 1949 after which it fell into obscurity. In 2005 a complete version of the film was made available once more.

In the last few weeks of the war in Europe, the Swedish diplomat Count Folke Bernadotte, vice-president of the Red Cross, was organising the removal of Danish and Norwegian prisoners from German concentration camps to neutral Sweden — a scheme known as the White Buses. In practice the scheme also included other nationalities. 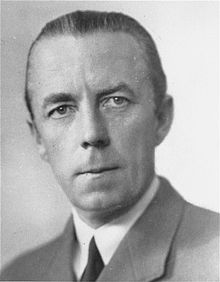 During March and April 1945, concentration camp prisoners from Scandinavian countries had been transported from all over the Reich to the Neuengamme concentration camp near Hamburg, in the White Bus programme co-ordinated through the Swedish Red Cross – with prisoners of other nationalities displaced to make room for them. 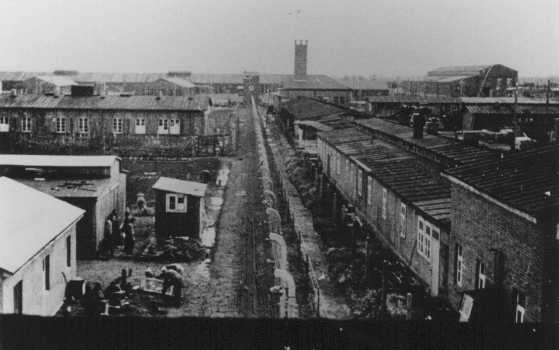 Eventually Himmler agreed that these Scandinavians, and selected others regarded as less harmful to Germany, could be transported through Denmark to freedom in Sweden. Then between the 16 and 28 April 1945, Neuengamme was systematically emptied of all its remaining prisoners, together other groups of concentration camp inmates and Soviet POWs; with the intention that they would be relocated to a secret new camp, either on the Baltic island of Fehmarn; or at Mysen in Norway where preparations were put in hand to house them under the control of concentration camp guards evacuated from Sachsenhausen.In the interim.

They were to be concealed from the advancing British and Canadian forces; and for this purpose the SS assembled a prison flotilla of decommissioned ships in the Bay of Lübeck, consisting of the liners SS Cap Arcona , Deutschland, the freighter Thielbek, and the motor launch Athen. 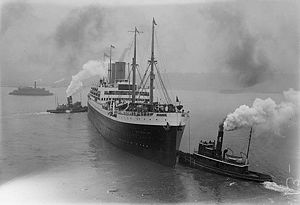 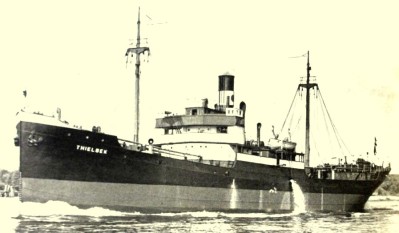 Since the steering motors were out of use in Thielbek and the turbines were out of use in Cap Arcona, Athen was used to transfer prisoners from Lübeck to the larger ships and between ships; who were locked below decks and in the holds, and denied food and medical attention. On 30 April 1945 the two Swedish ships, Magdalena and Lillie Matthiessen, previously employed as support vessels for the White Bus evacuations, made a final rescue trip to Lübeck and back. Amongst the prisoners rescued were some transferred from the prison flotilla. On the evening of 2 May 1945 more prisoners, mainly women and children from the Stutthof and Mittelbau-Dora camps were loaded onto barges and brought out to the anchored vessels; although, as the Cap Arcona refused to accept any more prisoners, over eight hundred were returned to the beach at Neustadt in the morning of 3 May, where around five hundred were killed in their barges by machine-gunning, or beaten to death on the beach, their SS guards then seeking to make their escape unencumbered.

The order to transfer the prisoners to the prison ships came from Gauleiter Karl Kaufmann in Hamburg.

By early May however, any relocation plans had been scotched by the rapid British military advance to the Baltic; so the SS leadership, which had moved to Flensburg on 28 April,discussed scuttling the ships with the prisoners still aboard.Later, at a war crimes tribunal, Kaufmann claimed the prisoners were intended to be sent to Sweden; although as none of the ships carried Red Cross hospital markings and nor were they seaworthy, this was scarcely credible. Georg-Henning Graf von Bassewitz-Behr, Hamburg’s last Higher SS and Police Leader (HSSPF), testified at the same trial that the prisoners were in fact to be killed “in compliance with Himmler’s orders”.Kurt Rickert, who had worked for Bassewitz-Behr, testified at the Hamburg War Crimes Trial that he believed the ships were to be sunk by U-boats or Luftwaffe aircraft Eva Neurath, who was present in Neustadt, and whose husband survived the disaster, said she was told by a police officer that the ships held convicts and were going to be blown up.

On 2 May 1945, the British Second Army discovered the empty camp at Neuengamme, and reached the towns of Lübeck and Wismar. No. 6 Commando, 1st Special Service Brigade commanded by Brigadier Derek Mills-Roberts, and 11th Armoured Division, commanded by Major-General George P. B. Roberts, entered Lübeck without resistance. 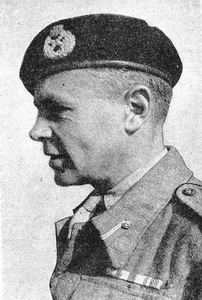 Lübeck contained a permanent Red Cross office in its function as a Red Cross port, and Mr. De Blonay of the International Committee of the Red Cross informed Major-General Roberts that 7,000–8,000 prisoners were aboard ships in the Bay of Lübeck. In the afternoon of 3 May 1945, the British 5th reconnaissance regiment advanced northwards to Neustadt, witnessing the ships burning in the bay and rescuing some severely emaciated prisoners on the beach at Neustadt, but otherwise finding mostly the bodies of women and children massacred that morning.

On 3 May 1945, three days after Hitler’s suicide and only one day before the unconditional surrender of the German troops in northwestern Germany at Lüneburg Heath to Field Marshal Montgomery, Cap Arcona, Thielbek, and the passenger liner Deutschland were attacked as part of general strikes on shipping in the Baltic Sea by RAF Typhoons of 83 Group of the 2nd Tactical Air Force. Through Ultra Intelligence, the Western Allies had become aware that most of the SS leadership and former concentration camp commandants had gathered with Heinrich Himmler in Flensburg, hoping to contrive an escape to Norway. The western allies had intercepted orders from the rump Dönitz government, also at Flensburg, that the SS leadership were to be facilitated in escaping Allied capture—or otherwise issued with false naval uniforms to conceal their identities as Dönitz sought, while surrendering, to maintain the fiction that his administration had been free from involvement in the camps, or in Hitler’s policies of genocide. 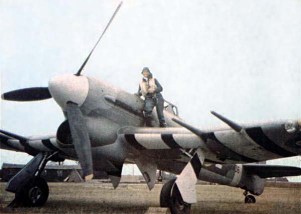 None of the prison flotilla were Red Cross marked (although the Deutschland had previously been intended as a hospital ship, and retained one white painted funnel with a red cross), and all prisoners were concealed below deck, so the pilots in the attacking force were unaware that they were laden with concentration camp survivors. Swedish and Swiss Red Cross officials had informed British intelligence on 2 May 1945 of the presence of prisoners on ships at anchor in Lübeck Bay, but the information had failed to be passed on.The RAF commanders ordering the strike believed that a flotilla of ships was being prepared in Lübeck Bay, to accommodate leading SS personnel fleeing to German-controlled Norway in accordance with Dönitz’s orders. “The ships are gathering in the area of Lübeck and Kiel. At SHAEF it is believed that important Nazis who have escaped from Berlin to Flensburg are onboard, and are fleeing to Norway or neutral countries”.

Equipped with lifejackets from locked storage compartments, most of the SS guards managed to jump overboard from Cap Arcona. German trawlers sent to rescue Cap Arcona‘s crew members and guards managed to save 16 sailors, 400 SS men, and 20 SS women. Only 350 of the 5,000 former concentration camp inmates aboard Cap Arcona survived. From 2,800 prisoners on board the Thielbek only 50 were saved; whereas all 2,000 prisoners on the Deutschland were safely taken off onto the Athen, before the Deutschland capsized.

RAF Pilot Allan Wyse of No. 193 Squadron recalled, “We used our cannon fire at the chaps in the water… we shot them up with 20 mm cannons in the water. Horrible thing, but we were told to do it and we did it. That’s war.”

Severely damaged and set on fire, Cap Arcona eventually capsized. Photos of the burning ships, listed as Deutschland,Thielbek, and Cap Arcona, and of the emaciated survivors swimming in the very cold Baltic Sea, around 7 °C (44.6 °F), were taken on a reconnaissance mission over the Bay of Lübeck by F-6 Mustang (the photo-reconnaissance version of the P-51) of the USAAF’s 161st Tactical Reconnaissance Squadron around 5:00 pm, shortly after the attack.

As a light rain began to fall on the afternoon of May 3, 1945, British soldiers of 6 Commando, 1st Special Services Brigade, searched the beaches of Neustadt, Germany, on the Baltic Sea for survivors. The bodies of men, women, and even small children lay by the hundreds on the sands. Offshore, under a gray, smoke filled sky, the soldiers could see the the still-smoldering hulk of the former luxury liner, the Cap Arcona, and scores of other damaged ships. A highly effective RAF bombing and rocket raid had destroyed the fleet and killed over 7,000 concentration camp inmates who had been imprisoned on the ships.

One soldier found a girl of about seven clutching the hand of a woman beside her. He presumed she was the girl’s mother. Both bodies were clad in black-and-white-striped wool garments of concentration camp prisoners. The heads and shoulders of floating corpses were visible just offshore, as victims of all ages drifted in

On 4 May 1945, a British reconnaissance plane took photos of the two wrecks, Thielbek and Cap Arcona,the Bay of Neustadt being shallow. The capsized hulk of Cap Arcona later drifted ashore, and the beached wreck was finally broken up in 1949. For weeks after the attack, bodies of victims washed ashore, where they were collected and buried in mass graves at Neustadt in Holstein, Scharbeutz and Timmendorfer Strand.Parts of skeletons washed ashore over the next 30 years, with the last find in 1971.

It’s a story no one would tell. The British government ordered the records to be sealed for 100 years. The sinking of one of the most glamorouse ocean liners of the early twentieth century just had it’s 62nd anniversary, appears in no history books. The governments of Germany and Great Britain continue to to refuse either to discuss it or release pertinent records. So another war atrocity remains mostly a secret, like several other sinkings during the time period. 7000 dead is an awfully lot to not even be able to mention it, but that is the way wars are run.

2 thoughts on “The tragedy of the SS Cap Arcona.”