Most of us will have heard of the Rock band Foo Fighters, Dave Grohl’s(from former Nirvana fame) musical ensemble.

But that is not the Foo Fighters I am talking about, although Dave Grohl did take his name from this WWII phenomenon.

Ever since mankind figured out that the world isn’t a flat plate but a globe and ever since mankind have discovered that the stars in the skies are all solar systems to an extend, we have wondered if there was other life out there, and just because the world was at war didn’t mean that these questions disappeared. In fact the fascination with extra terrestiral life probably became greater.

The term foo fighter was used by Allied aircraft pilots in World War II to describe
various mysterious aerial phenomena seen in the skies over both the European and
Pacific Theater of Operations.  The first sightings occurred in November 1944, when
pilots flying over Germany reported seeing fast-moving round glowing objects
following their aircraft.  The objects were described as fiery and glowing red, white, or
orange.  Some pilots described them as resembling Christmas tree lights and fireballs, as
big as 300 feet and as small as 1 foot.  The foo fighters could not be outmaneuvered or
shot down.Later on they were also spotted in the skies all over the globe. 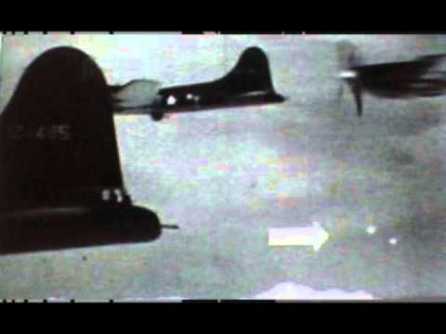 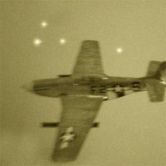 The military took the sightings seriously, suspecting that the mysterious sightings might
be secret German weapons, but further investigation revealed that German and Japanese
pilots had reported similar sightings.  During war time the term foo fighters became
commonly used to mean any UFO sighting.  Many people have speculated
extraterrestrial involvement.  During WWII, these experiences were taken very
seriously.  Accounts of these cases were presented to heavyweight scientists, such as
David Griggs, Luis Alvarez and H.P. Robertson.  The phenomenon was never
explained.  Most of the information about the issue has never been released by military
intelligence.

Though “foo fighter” initially described a type of UFO reported and named by the U.S. 415th Night Fighter Squadron, the term was also commonly used to mean any UFO sighting from that period.

The nonsense word “foo” emerged in popular culture during the early 1930s, first being used by cartoonist Bill Holman who peppered his Smokey Stover fireman cartoon strips with “foo” signs and puns.

The term foo was borrowed from Bill Holman’s Smokey Stover by a radar operator in the 415th Night Fighter Squadron, Donald J. Meiers, who it is agreed by most 415th members gave the foo fighters their name. Meiers was from Chicago and was an avid reader of Bill Holman’s strip which was run daily in the Chicago Tribune. Smokey Stover’s catch phrase was “where there’s foo, there’s fire”. In a mission debriefing on the evening November 27, 1944, Fritz Ringwald, the unit’s S-2 Intelligence Officer, stated that Meiers and Ed Schleuter had sighted a red ball of fire that appeared to chase them through a variety of high-speed maneuvers. Fritz said that Meiers was extremely agitated and had a copy of the comic strip tucked in his back pocket. He pulled it out and slammed it down on Fritz’s desk and said, “… it was another one of those fuckin’ foo fighters!” and stormed out of the debriefing room.

According to Fritz Ringwald, because of the lack of a better name, it stuck. And this was originally what the men of the 415th started calling these incidents: “Fuckin’ Foo Fighters.” In December 1944, a press correspondent from the Associated Press in Paris, Bob Wilson, was sent to the 415th at their base outside of Dijon, France to investigate this story It was at this time that the term was cleaned up to just “foo fighters”. The unit commander, Capt. Harold Augsperger, also decided to shorten the term to foo fighters in the unit’s historical data

The first sightings occurred in November 1944, when pilots flying over Germany by night reported seeing fast-moving round glowing objects following their aircraft. The objects were variously described as fiery, and glowing red, white, or orange. Some pilots described them as resembling Christmas tree lights and reported that they seemed to toy with the aircraft, making wild turns before simply vanishing. Pilots and aircrew reported that the objects flew formation with their aircraft and behaved as if under intelligent control, but never displayed hostile behavior. However, they could not be outmaneuvered or shot down. The phenomenon was so widespread that the lights earned a name – in the European Theater of Operations they were often called “kraut fireballs” but for the most part called “foo-fighters”. The military took the sightings seriously, suspecting that the mysterious sightings might be secret German weapons, but further investigation revealed that German and Japanese pilots had reported similar sightings.[9]

On 13 December 1944, the Supreme Headquarters Allied Expeditionary Force in Paris issued a press release, which was featured in the New York Times the next day, officially describing the phenomenon as a “new German weapon”. Follow-up stories, using the term “Foo Fighters”, appeared in the New York Herald Tribune and the British Daily Telegraph.

In its 15 January 1945 edition Time magazine carried a story entitled “Foo-Fighter”, in which it reported that the “balls of fire” had been following USAAF night fighters for over a month, and that the pilots had named it the “foo-fighter”. According to Time, descriptions of the phenomena varied, but the pilots agreed that the mysterious lights followed their aircraft closely at high speed. Some scientists at the time rationalized the sightings as an illusion probably caused by afterimages of dazzle caused by flak bursts, while others suggested St. Elmo’s Fire as an explanation.

The “balls of fire” phenomenon reported from the Pacific Theater of Operations differed somewhat from the foo fighters reported from Europe; the “ball of fire” resembled a large burning sphere which “just hung in the sky”, though it was reported to sometimes follow aircraft. On one occasion, the gunner of a B-29 aircraft managed to hit one with gunfire, causing it to break up into several large pieces which fell on buildings below and set them on fire. There was speculation that the phenomena could be related to the Japanese fire balloons’ campaign. As with the European foo fighters, no aircraft was reported as having been attacked by a “ball of fire”

The postwar Robertson Panel cited foo fighter reports, noting that their behavior did not appear to be threatening, and mentioned possible explanations, for instance that they were electrostatic phenomena similar to St. Elmo’s fire, electromagnetic phenomena, or simply reflections of light from ice crystals. The Panel’s report suggested that “If the term “flying saucers” had been popular in 1943–1945, these objects would have been so labeled.

There are several theories that disclaim the UFO theories but I would like to believe that the truth might be out there.