Saddam was hanged on the first day of Eid ul-Adha, 30 December 2006, 10 years ago today, despite his wish to be shot (which he felt would be more dignified). The execution was carried out at Camp Justice, an Iraqi army base in Kadhimiya, a neighborhood of northeast Baghdad.

Not long before the execution, Saddam’s lawyers released his last letter. The following includes several excerpts:

To the great nation, to the people of our country, and humanity,

Many of you have known the writer of this letter to be faithful, honest, caring for others, wise, of sound judgment, just, decisive, careful with the wealth of the people and the state … and that his heart is big enough to embrace all without discrimination.

You have known your brother and leader very well and he never bowed to the despots and, in accordance with the wishes of those who loved him, remained a sword and a banner.

This is how you want your brother, son or leader to be … and those who will lead you (in the future) should have the same qualifications.

Here, I offer my soul to God as a sacrifice, and if He wants, He will send it to heaven with the martyrs, or, He will postpone that … so let us be patient and depend on Him against the unjust nations.

Remember that God has enabled you to become an example of love, forgiveness and brotherly coexistence … I call on you not to hate, because hate does not leave a space for a person to be fair and it makes you blind and closes all doors of thinking and keeps away one from balanced thinking and making the right choice.

I also call on you not to hate the peoples of the other countries that attacked us and differentiate between the decision-makers and peoples. Anyone who repents – whether in Iraq or abroad – you must forgive him.

You should know that among the aggressors, there are people who support your struggle against the invaders, and some of them volunteered for the legal defence of prisoners, including Saddam Hussein … some of these people wept profusely when they said goodbye to me. 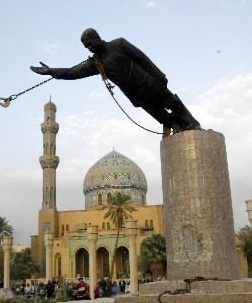 I have written this letter, because the lawyers told me that the so-called criminal court — established and named by the invaders — will allow the so-called defendants the chance for a last word. But that court and its chief judge did not give us the chance to say a word, and issued its verdict without explanation and read out the sentence — dictated by the invaders — without presenting the evidence. I wanted the people to know this.