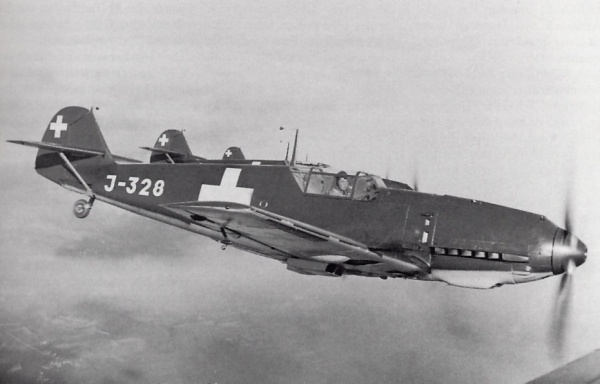 Although Switzerland remained neutral throughout World War II, it had to deal with numerous violations of its airspace by combatants from both sides – initially by German aircraft, especially during their invasion of France in 1940. Zealous Swiss pilots attacked and shot down eleven German aircraft, losing two of their own, before a threatening memorandum from the German leadership forced General Guisan to forbid air combat above Swiss territory.

Later in the war, the Allied bomber offensive sometimes took US or British bombers into Swiss airspace, either damaged craft seeking safe haven or even on occasions bombing Swiss cities by accident.

Swiss aircraft would attempt to intercept individual aircraft and force them to land, interning the crews. Only one further Swiss pilot was killed during the war, shot down by a US fighter in September 1944. From September red and white neutrality bands were added to the wings of aircraft to stop accidental attacks on Swiss aircraft by Allied aircraft. 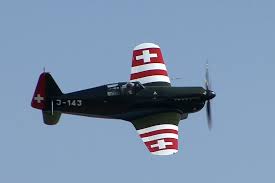 From 1943 Switzerland shot down American and British aircraft, mainly bombers, overflying Switzerland during World War II: six by Swiss air force fighters and nine by flak cannons, and 36 airmen were killed. On 1 October 1943 the first American bomber was shot near Bad Ragaz: Only three men survived.

The officers were interned in Davos, airmen in Adelboden. The representative of the U.S. military in Bern, U.S. military attaché Barnwell R. Legge, instructed the soldiers not to flee so as to allow the U.S. Legation to coordinate their escape attempts, but the majority of the soldiers thought it was a diplomatic ruse or did not receive the instruction directly.

On 1 October 1944 Switzerland housed 39,670 internees in all: 20,650 from Italy, 10,082 from Poland, 2,643 from the United States, 1,121 from the United Kingdom (including five Australians), 822 from the Soviet Union and 245 from France. In September the Office of Strategic Services (OSS) was commissioned by the U.S. supreme command to organize the escapes of 1,000 American internees, but the task was not effectively accomplished before late winter 1944/45. 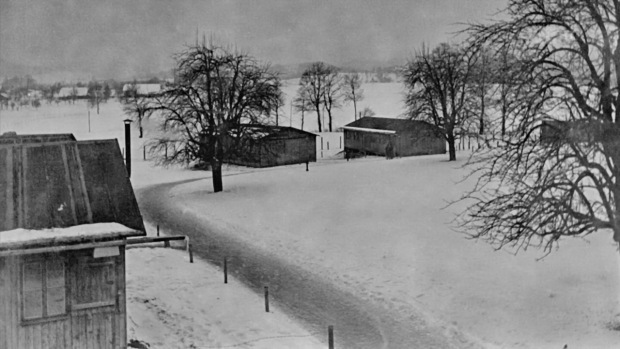 Official Swiss records identify 6,501 airspace violations during the course of the war, with 198 foreign aircraft landing on Swiss territory and 56 aircraft crashing there.