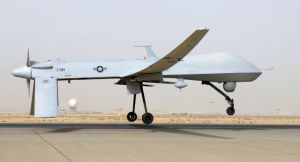 Unmanned aerial vehicles, popularly known as drones, are most often associated with airstrikes in modern warfare, but their history goes much further back than that. While drones came into the spotlight during the early years of the 21st century the idea of a remotely-operated flying machine was developed much earlier. A forerunner of what we consider today to be an unmanned aerial vehicle was an Austrian balloon used during the siege of Venice in 1849.

During WWI many eccentric weapons were developed on all sides of the conflict. One was the pilotless aircraft that operated with the help of Archibald Low’s revolutionary radio controlled techniques.  The Ruston Proctor Aerial Target represented the cutting edge of drone technology in 1916. Low, nicknamed “the father of radio guidance systems,” was happy for the project to be developed further and used in kamikaze-style ramming strikes against Zeppelins.