In 1923, Hugo Boss founded his own clothing company in Metzingen, a small town south of Stuttgart, where it is still based. In 1924 he started a factory along with two partners. The company produced shirts, jackets, work clothing, sportswear and raincoats. Due to the economic climate of Germany at the time, Boss was forced into bankruptcy.

Boss joined the Nazi Party in 1931, two years before Adolf Hitler came to power. By the third quarter of 1932, the all-black SS uniform (to replace the SA brown shirts) was designed by SS-Oberführer Prof. Karl Diebitsch and Walter Heck (graphic designer).

The Hugo Boss company produced these black uniforms along with the brown SA shirts and the black-and-brown uniforms of the Hitler Youth. 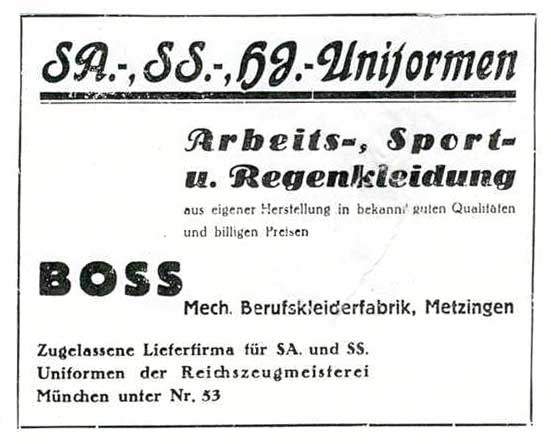 Some workers are acknowledged to have been French and Polish prisoners of war forced into labour. In 1999, US lawyers acting on behalf of Holocaust survivors started legal…