The below pictures are from the Ringelblum archive at the Jewish Historical Institute in Warsaw. Named after Emanuel Ringelblum who was executed on the 7th of March 1944 at the Pawiak Prison in Warsaw.

I will not say too much about these paintings, I will let them do the talking. 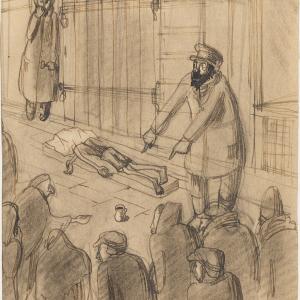 Other pieces of art

1942. Esther Lurie used ink on cardboard to draw this scene. She described here new deportees arriving
in the ghetto, carrying bundles of their meager possessions and scrutinized by armed guards.

Josef Nassy (1904–1976) was a black expatriate artist of Jewish descent. Nassy was living in Belgium when World War II began, and was one of about 2,000 civilians holding American passports who were confined in German internment camps during the war.

Fear and separation by Ella Liebermann.