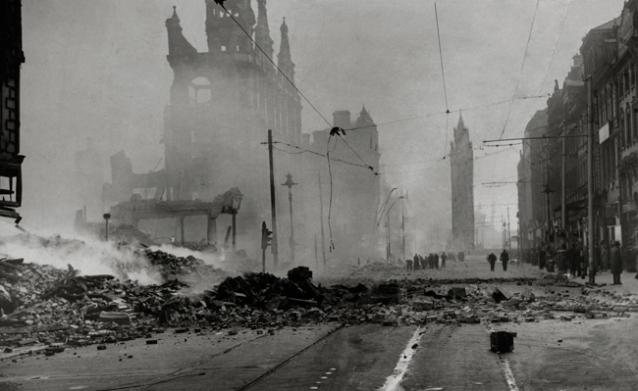 Although the Republic of Ireland was neutral and was left largely unscathed during the war, Northern Ireland as part of the UK was not that lucky.

Belfast being the biggest city of Northern Ireland was hit by German bombers 4 times, between the 7th of April and 6th of May 1941. 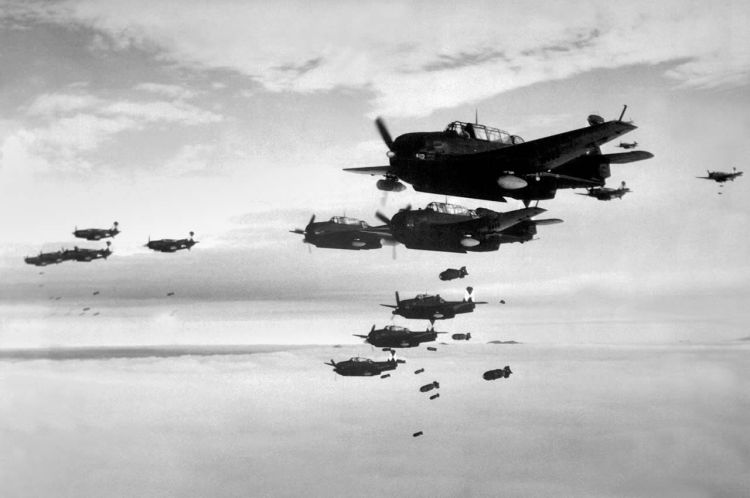 Northern Ireland was ill prepared for the Luftwaffe’s arrival. Ministers felt it unlikely that the bombers could reach Belfast.

There were only four public air raid shelters in Belfast, and most of the city’s searchlights had been sent back to England. There were plans to evacuate 70,000 children from Belfast, but little over 10% of that number actually left. When an unobserved German plane flew over Belfast to identify targets in November 1940, it saw a city defended by only seven anti-aircraft batteries. By March 1941, Northern Ireland’s minister of public security was close to panic – with some justification. 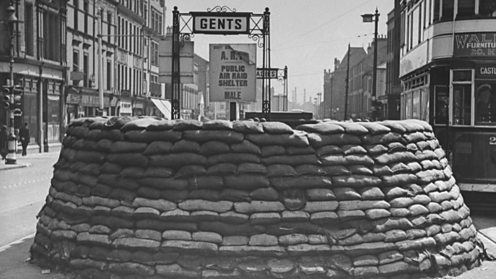 Around midnight on Monday 7 April 1941, seven German planes began bombing Belfast targets that had been identified the previous year.

The moon, half-full, enabled the Germans to attack by sight as they flew low, just above the barrage balloons. In half-hour intervals, the Luftwaffe bombed the docks and shipyards with alarming accuracy. The fuselage factory at Harland and Wolff was hit by a parachute mine, destroying 50 Sterling bombers. Incendiary bombs and high explosives also destroyed houses in north and east Belfast. By the time the raid ended at around 3.30am, 13 people had been killed.

William Joyce (known as “Lord Haw-Haw”) announced in radio broadcasts from Hamburg that there will be “Easter eggs for Belfast”. 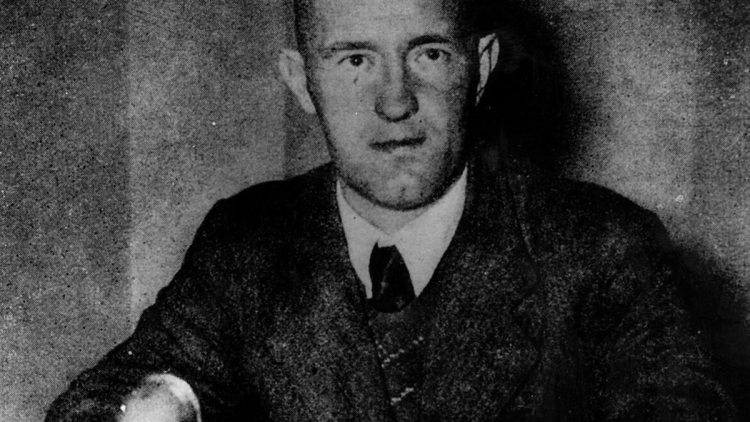 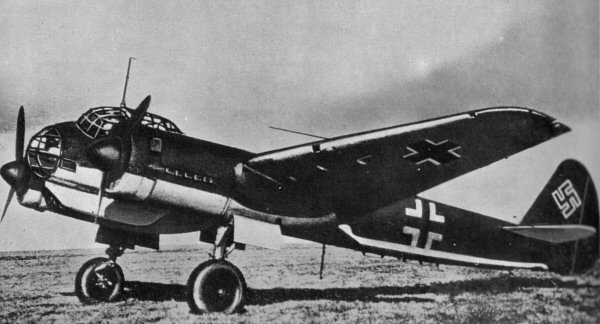 That evening up to 200 bombers left their bases in northern France and the Netherlands and headed for Belfast. There were Heinkel He 111s, Junkers Ju 88s and Dorniers. At 10:40 pm the air raid sirens sounded. 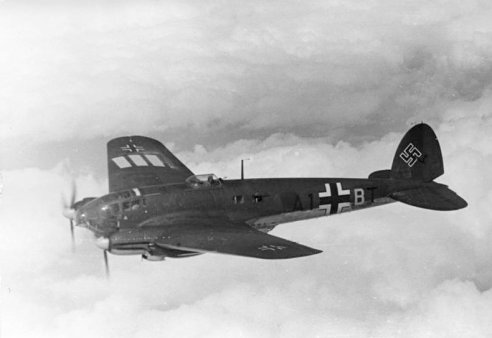 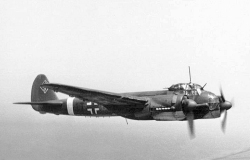 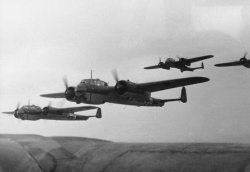 Accounts differ as to when flares were dropped to light up the city. The first attack was against the city’s waterworks, which had been attacked in the previous raid. High explosives were dropped. Initially it was thought that the Germans had mistaken this reservoir for the harbour and shipyards, where many ships, including HMS Ark Royal were being repaired. 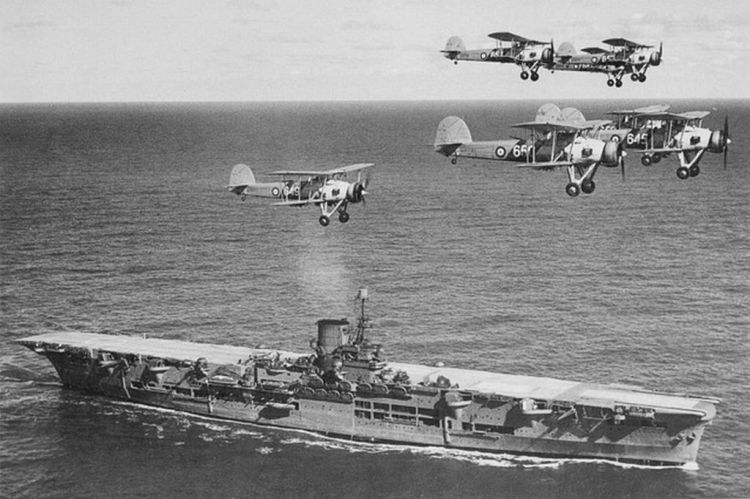 However that attack was not an error. Three vessels nearing completion at Harland and Wolff’s were hit as was its power station. Wave after wave of bombers dropped their incendiaries, high explosives and land-mines. When incendiaries were dropped, the city burned as water pressure was too low for effective firefighting. 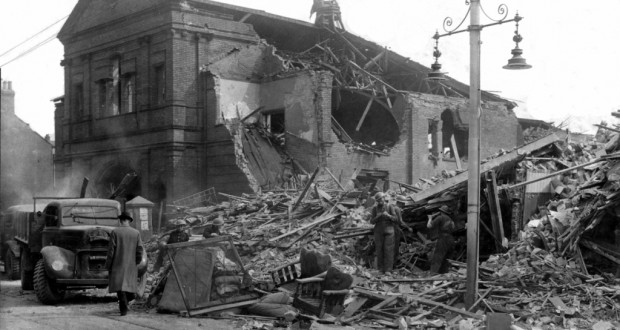 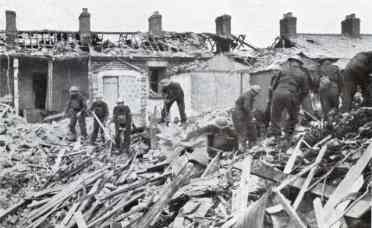 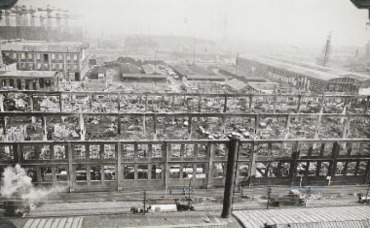 There was no opposition. In the mistaken belief that they might damage RAF fighters, the seven anti-aircraft batteries ceased firing. But the RAF had not responded. The bombs continued to fall until 5am.

Fifty-five thousand houses were damaged leaving 100,000 temporarily homeless. Outside of London, with some 900 dead, this was the greatest loss of life in a night raid during the Blitz.A stray bomber attacked Derry, killing 15. Another attacked Bangor, killing five. By 4 am the entire city seemed to be in flames. At 4.15am John MacDermott, the Minister of Public Security, managed to contact Basil Brooke (then Agriculture Minister), seeking permission to seek help from the Irish government. Brooke noted in his diary “I gave him authority as it is obviously a question of expediency”. Since 1.45am all telephones had been cut. Fortunately, the railway telegraphy link between Belfast and Dublin was still operational. The telegram was sent at 4.35am, asking the Irish Taoiseach, Éamon de Valera for assistance. 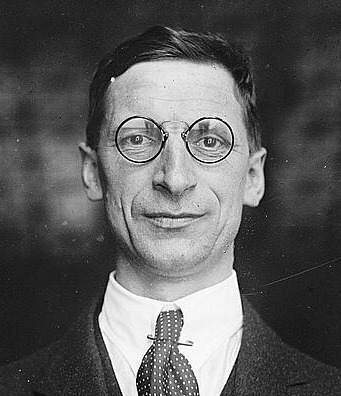 For decades now it has been part of unionist and loyalist lore that the then Fianna Fáil government was partly to blame for the Belfast Blitz due to a decision not to black out neutral Irish towns and cities at night.

Over 900 lives were lost, 1,500 people were injured, 400 of them seriously. Fifty-thousand houses, more than half the houses in the city, were damaged. Eleven churches, two hospitals and two schools were destroyed.

Today marks the 47th anniversary of Bloody Sunday sometimes also referred to as the Bogside Massacre.

Sunday January 30th 1972 started as any other Sunday in Derry but would end with tragedy and a population thrown into a dark backlash of opinion towards the British. 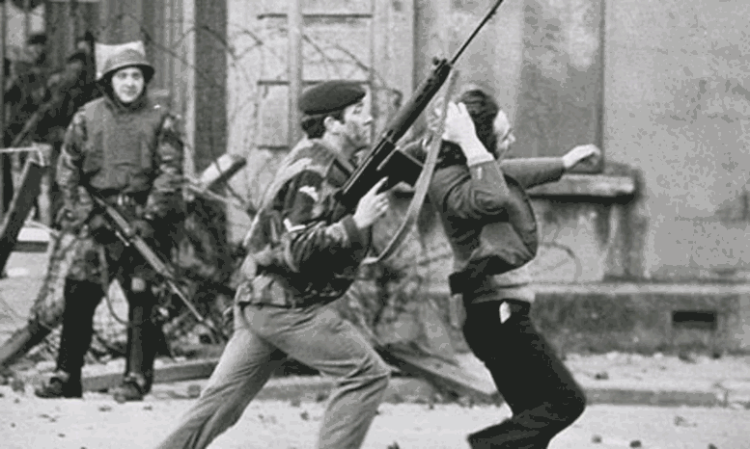 British soldiers shot 26 unarmed civilians during a peaceful protest march against internment. Fourteen people died: thirteen were killed outright, while the death of another man four months later was attributed to his injuries. Many of the victims were shot while fleeing from the soldiers and some were shot while trying to help the wounded. Other protesters were injured by rubber bullets or batons, and two were run down by army vehicles.The march had been organised by the Northern Ireland Civil Rights Association (NICRA). The soldiers involved were members of the 1st Battalion, Parachute Regiment, also known as “1 Para”.

The Northern Ireland Civil Rights Association (NICRA) organised a march to start at 3PM from the Bishops Field area of the Creggan. The march had already been deemed illegal by the British and from previous march’s the police force and the British proved too ruthless against peaceful demonstrators such as the attack on a civil rights march at Burntollet bridge. 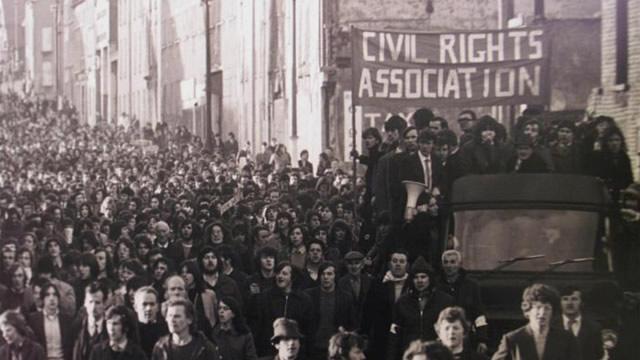 The plan for the march was to walk down Creggan Hill, into William Street and onto the Guildhall Square, in the City Centre area. Over 15,000 people attended the march which proceeded from Creggan. The marchers were singing songs with some describing it as a carnival like event. As they reached the William Street area the British Army had set-up barricades so the march was diverted into the Bogside and towards Free Derry Corner, a small area that  isolated itself from the Northern Ireland state known as as no-go area for the British forces.Despite this, a number of people continued on towards an army barricade where local youths threw stones at soldiers, who responded with a water cannon, CS gas and rubber bullets. 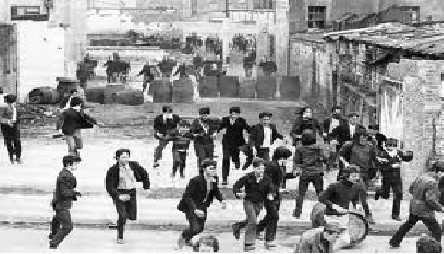 As the riot began to disperse, soldiers of the 1st Parachute Regiment were ordered to move in and arrest as many of the rioters as possible. In the minutes that followed, some of these paratroopers opened fire on the crowd, killing thirteen men and injuring 13 others, one of whom died some months later. 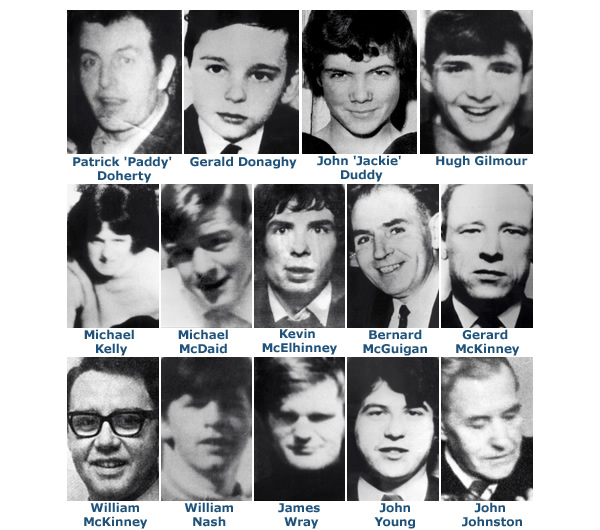 A large group of people fled or were chased into the car park of Rossville Flats. This area was like a courtyard, surrounded on three sides by high-rise flats. The soldiers opened fire, killing one civilian and wounding six others.This fatality, Jackie Duddy, was running alongside a priest, Father Edward Daly, when he was shot in the back. 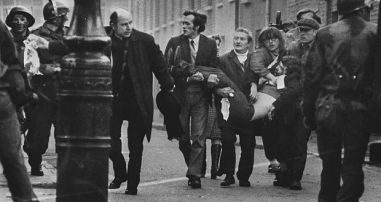 While the British Army maintained that its troops had responded after coming under fire, the people of the Bogside saw it as murder. The British government was sufficiently concerned for the Home Secretary to announce the following day an official inquiry into the circumstances of the shootings.

Opinion was further polarised by the findings of this tribunal, led by the British Lord Chief Justice, Lord Widgery. His report exonerated the army and cast suspicion on many of the victims, suggesting they had been handling bombs and guns. Relatives of the dead and the wider nationalist community campaigned for a fresh public inquiry, which was finally granted by then Prime Minister Tony Blair in 1998.

Headed by Lord Saville, the Bloody Sunday Inquiry took 12 years and finally reported in 2010. It established the innocence of the victims and laid responsibility for what happened on the army.

Prime Minister David Cameron called the killings “unjustified and unjustifiable”. The families of the victims of Bloody Sunday felt that the inquiry’s findings vindicated those who were killed, raising the question of prosecutions and compensation.