Wartime is the perfect opportunity for killers to apply their ‘trade’, when a body is found the authorities will automatically assume that it is just another victim of war, at least that is what John Cummins must have thought when he copied Jack the ripper in February 1942. But unlike Jack the Ripper Cummins just wasn’t that clever.

Gordon Frederick Cummins (1914 – 25 June 1942), known as the Blackout Killer and the Blackout Ripper, was an English serial killer who murdered four women in London in 1942. The Ripper tag came from similarities with the Jack the Ripper murders, as both killers mutilated their victims.

Gordon Frederick Cummins was allegedly the ilegimate son of a titled member of the peerage. His claims of noble birth led others to call him “The Count”. He married a theatre producer’s secretary in 1936. When World War II began in September 1939, he enlisted in the R.A.F

From the start of that conflict, the streets and buildings of London were kept dark as a precaution against aerial bombing by the Luftwaffe. Street lamps were not lit; the windows of houses, shops, offices and factories were painted over, shuttered or screened off with thick curtains. Showing even a chink of light could lead to an appearance in court and a heavy fine. As bombs fell upon the capital, Londoners took refuge in cellars, underground train stations and public air raid shelters. In a period of six days in February 1942, in the midst of a darkened, blitzed city, Cummins (then 28 years old) murdered four women and attacked two others. Three of his victims were mutilated after death. The newspapers dubbed him “The Blackout Ripper”

Cummins had volunteered to retrain for aircrew duties and had been posted to RAF ACRC (Aircrew Reception Centre) Regents Park, London. There, serving members of the RAF and new recruits were assessed for training. This intake ran from 2 to 25 February when trainees were posted to ITW (Initial Training Wing) at home for three months ground training before commencing flying training, or to Blackpool prior to going overseas for training. At the time of his arrest, Cummins had neither a previous criminal record nor a known history of violence.

Over six days in February 1942, Cummins took advantage of London’s night-time blackout conditions to murder four women and attempt to murder two others. He mutilated the bodies of three of his victims. 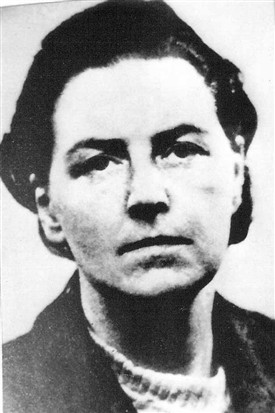 On Sunday 9 February 1942, the body of 40-year-old pharmacist Evelyn Hamilton was discovered in an air raid shelter in Montagu Place in Marylebone. She had been strangled and her handbag stolen.

On Monday 10 February, the naked body of 35-year-old Evelyn Oatley (also known as Nita Ward) was discovered in her flat on Wardour Street. As well as having been strangled, her throat had been cut and she had also been sexually mutilated with a can opener.Fingerprints found on the can opener confirmed earlier suspicions that the strangler was left-handed.

On Tuesday 11 February, a 43-year-old prostitute, Margaret Florence Lowe (also known as Pearl), was murdered in her flat in Gosfield Street, Marylebone. She had been strangled with a silk stocking and her body mutilated with a variety of implements including a razor blade, a knife and a candlestick. The pathologist, Bernard Spilsbury, after seeing her injuries commented that they were “quite dreadful” and that the murderer was “a savage sexual maniac”.

On Wednesday 12 February 1942, 32-year-old Doris Jouannet (also known as Doris Robson) was murdered in the ground floor flat that she shared with her husband. She had been strangled with a scarf and her naked body sexually mutilated. It was at this point the newspapers began to describe the killer as the Blackout Ripper, in reference to the similarities with Jack the Ripper.

On Friday 14 February 1942, Greta Hayward was attacked in a doorway near Piccadilly Circus by a man in RAF uniform whose sexual advances she had previously rejected. She managed to escape as her attacker was interrupted by the arrival of a delivery boy making his rounds. The attacker then ran off.

Not to be deterred, he shortly picked up another prostitute, Mrs Mulcahy, in Regent Street. He gave her £5 while they went by taxi to her flat in Paddington. When they got there she started to remove her clothes. According to Mrs Mulcahy, ‘a strange look came over his face.’ Cummins grabbed her by the throat and squeezed. Mrs M, who had kept her boots on because of the cold, kicked him in the shins, making him release her. Cummins recovered his composure, gave her another £5, and left. He left his belt behind this time.

When Cummins had been disturbed by the delivery boy during the attack on Greta Hayward, he left behind his RAF–issued gas mask case. The gas mask container had the service number 525987 on the side, identifying it as belonging to Cummins.

On 16th February, the police arrested Gordon Frederick Cummins in the St. John’s Wood district. His fingerprints matched those on the bloody tin opener and a search of his quarters turned up several items that belonged to his victims.

On 27th April, Gordon Cummins was tried for the murder of Evelyn Oatley at the Old Bailey (before Mr Justice Asquith). He was charged with only one murder – presumably so that the authorities could immediately charge him with any of the other 3 homicides in the unlikely event of an acquittal in the Oatley case. The Prosecution was handled by Mr G.B. McClure; Cummins was represented by Mr J. Flowers. The trial lasted only a single day and the jury took a mere 35 minutes to find Cummins guilty of the murder of Evelyn Oatley. He was sentenced to death by hanging.

Lord Chief Justice Humphreys dismissed Cummings’ appeal and confirmed the sentence. On 25th June, “The Blackout Ripper” was executed at London’s Wandsworth Prison; an air raid was in progress over the city as he was led to the gallows.