Today marks the 74th anniversary of the first successful launch of a V-2 /A4-rocket from Test Stand VII at Peenemünde, Germany.Making it the 1st official man made object to reach space, making space exploration a fact.

However the Nazi’s weren’t really interested in space exploration for the betterment of humankind.

Test Stand VII(P-7) was the principal V-2 rocket testing facility at Peenemünde Airfield and was capable of static firing of rocket motors up to 200 tons thrust. Notable events at the site include the first successful V-2 launch on 3 October 1942.

Two distinguishing features of P-7 were the 670-yard-long ,elliptical high-sloped sand wall and the wide concrete-lined trench (flame pit) with a large symmetrical water-cooled flame deflector of molybdenum-steel pipes. The concrete trench, nearly 25 feet (7.6 m) wide with 3 feet (0.91 m) concrete walls, sloped gradually away from each side of the flame deflector to a depth of 20 feet (6.1 m), rising again symmetrically toward the side of the arena. Beside the flame pit was a long underground room where 4 feet (1.2 m) diameter delivery pipes were housed to route cooling water at 120 gallon per second from three huge pumps in the pumphouse to the flame deflector in the pit.

While the elliptical sand wall was for blocking high sea winds and blown sand, concrete structures were integrated into the wall and under the ground to protect equipment and personnel from rocket explosions and enemy bombing (a sand-filled dummy warhead, called “the elephant”, was normally used). A large gap in the wall allowed easy entry by vehicles (particularly rail cars with propellants), and an open tunnel through the ellipse wall at the narrower southern end also allowed entry. Integrated into the ellipse wall next to the tunnel was a massive observation and measuring blockhouse containing the control center. The control center had a double door with a bulletproof glass window from which an observer maintained telephone communication with the Telemetering Building at a remote location from P-7. A receiver in a lighthouse near Koserow provided telemetry from rockets with the Wolman System for Doppler tracking. For rockets that used radio control for V-2 engine cutoff, the Brennschluss(burn-out) equipment included a transmitter on the bank of the Peene about 7.5 miles (12.1 km) from P-7 and the Doppler radar at Lubmin (a motorized Würzburg radar, the “rhinoceros” 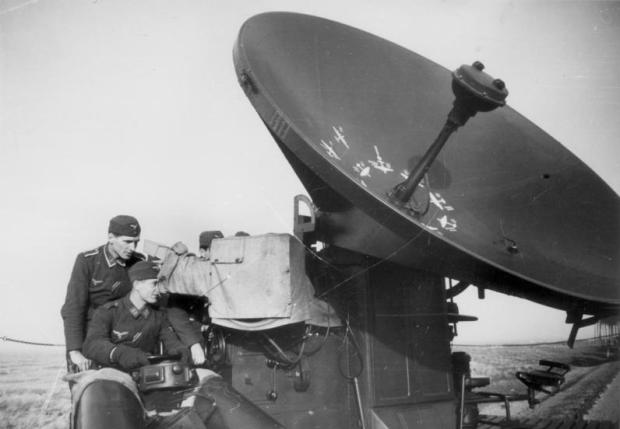 Beginning in September 1944, over 3,000 V-2s were launched by the German Wehrmacht against Allied targets during the war, first London and later Antwerp and Liège.

According to a 2011 BBC documentary, the attacks resulted in the deaths of an estimated 9,000 civilians and military personnel, while 12,000 forced laborers and concentration camp prisoners died producing the weapons. 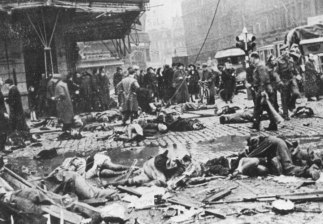 “This third day of October, 1942, is the first of a new era in transportation, that of space travel…”

The control room  had switchboards, a row of four periscopes, manometers, frequency gauges, voltmeters and ammeters, green/red/white signal lamps, and switches at the propulsion console and guidance panel to dynamically display approximately 15 measurement points within the rocket. Additionally, the control room had a big “X-time” countdown clock that display the time until launch, which was announced via loudspeakers as “X minus four minutes“, etc. In addition to the control room, the blockhouse also contained offices, a conference room, a small dormitory with double bunks and an adjoining shower, a wash room, and a workshop. A long underground corridor led from the measurement blockhouse to a room in the concrete foundation by the flame pit, and multiple rows of measurement cables covered the walls of the tunnel. A different gradually rising tunnel led from the long flame pit room to the exterior of the arena near the pumphouse . Near the pumphouse were high wooden towers to cool the water, and 25 feet (7.6 m) high tanks for the recooling water were integrated into the ellipse wall. 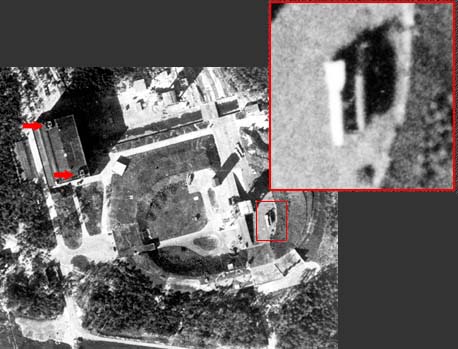 The prominent tower within the arena was a mobile test frame/crane (Fahrbare Kranbühne)which could be moved over the flame pit to position the rocket nozzle 25 feet above the deflector, and which allowed an entire missile to be gimbaled in two directions up to five degrees from vertical. The tower included an elevator and a German-made Toledo scale for thrust measurements. Actual launches were from a steel table-like structure (firing stand, Brennstand) across the railway from the flame pit on the test stand’s large concrete foundation. Under the concrete foundation were the recorder room, a small shop, an office, compressed nitrogen storage cylinders, and catch tanks. The arena also included an engine cold-calibration pad for conducting flow test measurements by pumping water (instead of Liquid oxygen) and alcohol(which was recovered afterward) via the turbopump through the combustion chamber. Since the V-2 motor had no controller for the turbopump, cold-calibration allowed the determination of “freak cases” of equipment.

“The heavy missile … rose only 15 feet above the firing table. Then it stood still! It stood upright in the air, showing no desire to turn over or to revolve about its longitudinal axis. It was an unbelievable sight. At any moment the rocket would topple or fall back, crash and explode. … But I still kept my binoculars on the rocket. … There must have been an interruption in the output of the steam generator for the propellant-pump turbine. … The film operator, Kühn, had taken up position facing me on the [elliptical] wall of the test stand. He must have had good nerves. The rocket hung in the air just 100 yards away.[from Kühn] Nothing daunted, … He certainly knew from experience that the moment the projectile fell back he would be in mortal danger. He just went on cranking. … Our exhaust vanes were doing a wonderful job. The rocket stood unsupported in the air, as straight as a ramrod. Only 4 seconds had passed, … The rocket was bound to topple now. The tilt [for trajectory control] would now begin automatically. … The rocket grew lighter owing to the steady fuel consumption. Almost imperceptibly, yard by yard, it began to climb. Its nose turned very gradually eastward. … At a height of 30 to 40 feet it moved slowly, still practically upright, toward the cameraman. He went on cranking. I caught my breath. Just a little more tilt and the rocket would certainly capsize and explode … Now it was over the wall. Kühn knelt down and pointed his camera almost straight upward. It was going to be some film! … I knew what was bound to come. … I saw him get up slowly, still cranking. His camera was now practically horizontal. Then he pointed it diagonally down from the high wall. Boom! … Smoke, flames, fragments of sheet-metal, branches, and sand whirled through the air. The rocket had crashed … 40 yards beyond the wall … The cameraman was still cranking. … I was filled with an immense pride. … only with men like this, could we finish the job that lay before us.”

It is such a shame that the Nazi’s only had death,destruction and annihilation in mind when they designed both V1 and V2 programs.