During World War II, the now-legendary VIII Bomber Command (often referred to as the Eighth Air Force) served as the principal American force assembled to attack Germany from the air. For several critical years in the early and mid-1940s, B-24 and B-17 bombers—the Flying Fortresses—from the “The Mighty 8th”, often in tandem with Royal Air Force fighters, crossed the Channel and hit strategic towns and cities in Nazi-held Europe

First crewman is wearing the RAF Type B flight helmet (famously used during the Battle of Britain), the second crewman is wearing a USAAF B-6 type shearling helmet. The mask is an early A8-B type used by bomber crews mostly from before the war up to about 1943 when it was phased out by more modern systems. The A-8B was a constant flow oxygen mask, patterned after the original design by Boothby, Lovelace, and Bulbillion (the mask was originally known as the BLB mask). It covered the mouth and nose and also had a rebreather bag attached to concentrate the oxygen for enrichment.

Both crewmen wear the famous B-3 type shearling jacket. Aviators in WWII bombers came to rely on their B-3 jackets as they often flew for 8-9 hours in unpressurized cabins, where air temperatures could drop to more than 60 degrees below zero (-53 Celsius). The bomber was vital to the crew’s comfort as the crimp of the sheep’s wool created insulating air spaces, naturally retaining heat and absorbing excess moisture generated by the body. It remains one of the warmest and most insulating bomber jacket ever made. Both crewmen also are sporting RAF type MK VII goggles with flip down sun visors. 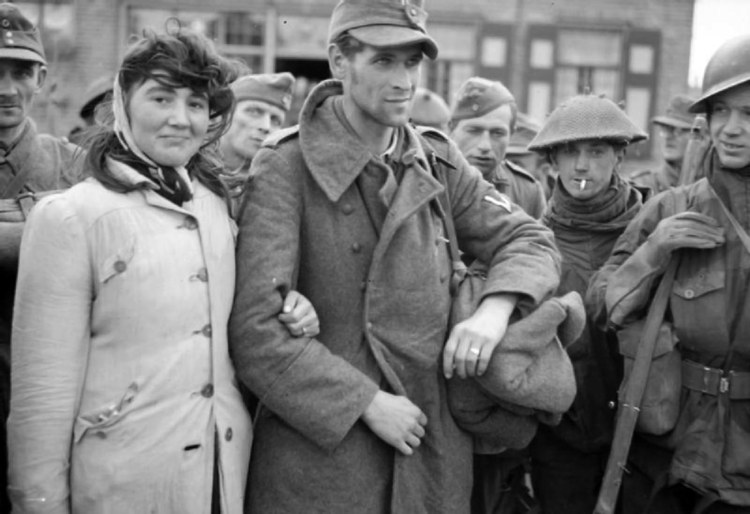 A Dutch woman is seen here with her husband, a German soldier that she had married during the German occupation of the Netherlands. Refusing to leave his side, she marched with the German prisoners to the Prisoner of War holding center. Picture taken in Walcheren, Zeeland, the Netherlands. November 1944.

Following the refusal of the Dutch government to return after the German invasion, the Netherlands was controlled by a German civilian governor, unlike France or Denmark which had their own governments, and Belgium, which was under German military control. The civil government, the Reichskommissariat Niederlande, was headed by the Austrian Nazi Arthur Seyss-Inquart. The German occupiers implemented a policy of Gleichschaltung (“enforced conformity”), and systematically eliminated non-Nazi organizations. Not all Dutch offered active or passive resistance against the German occupation. Some Dutch men and women chose or were forced to collaborate with the German regime or joined the German army (which usually would mean being placed in the Waffen-SS).

After the war, some accused of collaborating with the Germans were lynched or otherwise punished without trial. Men who had fought with the Germans in the Wehrmacht or Waffen-SS were used to clear minefields and suffered losses accordingly. Others were sentenced by courts for treason. Dutch women who had sexual relations with German soldiers were publicly humiliated. Some were proven to have been wrongly arrested and were cleared of charges, sometimes after being held in custody for a long period of time.

Helga was the oldest of Goebbels’ six children and notably his favorite. Goebbels was proud of his eldest daughter and would go straight to her cot as soon as he returned from his office, to take her on his lap. Helga was a “daddy’s girl” who preferred her father to her mother. She was reported to have been a lovely baby who never cried and just sat listening uncomprehendingly to the Nazi officials with “her blue eyes sparkling”. It was not unusual for Hitler, who was fond of children, to take her on to his own lap while he talked late into the night. Joseph Goebbels and his wife Magda Quandt had 6 children: Helga Susanne, Hedwig Johanna, Helmut Christian, Hildegard, Holdine Kathrine and Heidrun Elisabeth – all starting with the letter H (allegedly after Hitler).

Before the war Argentina hosted a strong, very-well-organized pro-Nazi element that was controlled by the German ambassador. In the spring of 1938, some 20,000 Nazi supporters attended a “Day of Unity” rally held at the Luna Park stadium in Buenos Aires to celebrate the Anschluss, the annexation of Austria into the Third Reich. 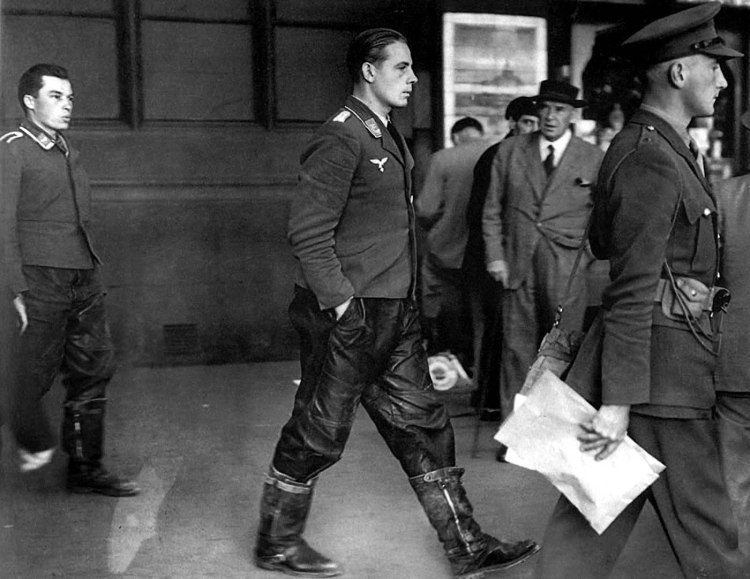 Under British military escort, two German Luftwaffe crewmen, an Unteroffizier (Subordinate Officer, or Corporal) and an Oberleutnant (the highest ranking Lieutenant Officer) who bailed out over the English countryside and were taken as POWs during a bombing raid emerge from the London Underground onto the city streets as shocked Londoners look on. The unorthodox travel arrangements for the two POWs on public transportation probably served as a good propagandistic photographic opportunity, as the image would be widely disseminated and seen by a nation beleaguered by constant aerial assaults during the Blitz. 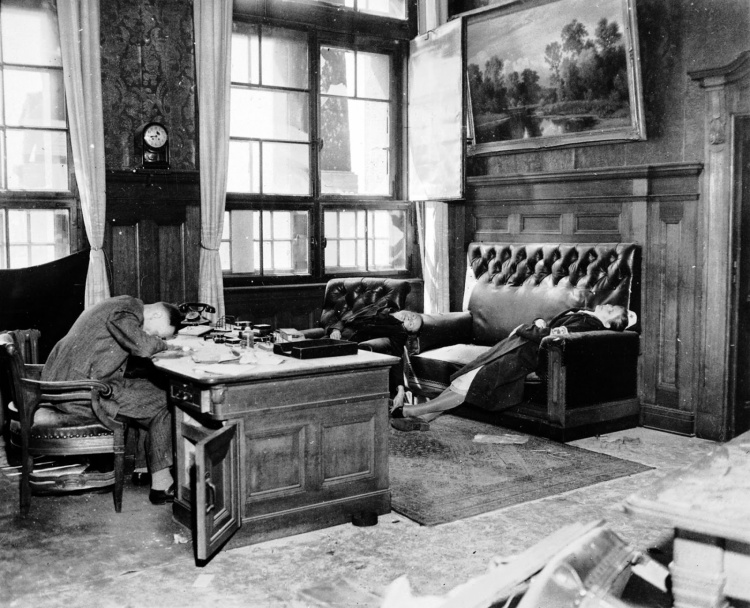 Deputy Mayor Dr. jur. Ernst Kurt Lisso, his wife Renate Stephanie, in chair, and their daughter Regina Lisso after committing suicide by cyanide in the Leipzig New Town Hall to avoid capture by US troops. April 18, 1945.

This photo shows Marlene Dietrich passionately kissing a GI as he arrives home from World War II. It seems that the guy on the left holding her up is enjoying the view. It was first published in Life Magazine with the caption: “While soldiers hold her up by her famous legs, Marlene Dietrich is kissed by a home-coming GI”. Photo taken by Irving Haberman.

Members of the French Resistance are photographed in the midst of battle against German troops during the Liberation of Paris. We see a man in makeshift army fatigues to the left and a young man on the right. Then, most strikingly, we see a woman in shorts, a patterned top, and a military hat in the center. The photograph of this young female fighter would become a symbol of women’s involvement in the Resistance.

Her name was Simone Segouin, also known by her nom de guerre Nicole Minet. When this photo was taken she was 18 years old. The girl had killed two Germans in the Paris fighting two days previously and also had assisted in capturing 25 German prisoners of war during the fall of Chartres. In 1944, at the height of the Nazi occupation of France, she joined the Francs-Tireurs et Partisans (Free-shooters and Partisans, or FTP) – a combat alliance made up of militant communists and French nationalists. Simone was very much in the latter camp. Her father was a huge inspiration – a decorated soldier who had fought in the Great War – and she was intensely proud of her country.

Finnish defenders sometimes, though very rarely, took fallen frozen Russian soldiers and posed them upright as psychological warfare. Although rare, a few cases have been documented. Common Russian soldiers and Finnish troops had a great deal of respect for the dead and would allow both parties to retrieve and bury their dead in peace and would make impromptu ceasefires for such occasions. Each party also buried the dead of the opposing side, left a stick on the ground marking the burial site and all the tags intact that would identify the dead.