This is a Friday the 13th story with a positive twist, on top of that it is one of those rare positive Holocaust events.

On Friday, the 13th of April, 1945. A few miles northwest of Magdeburg there was a railroad siding in wooded ravine not far from the Elbe River. Major Clarence L. Benjamin in a jeep was leading a small task force of two light tanks on a routine job of patrolling. On that patrol they came across a train on a siding.

But rather then putting the story in words I will let the pictures do the talking.(Photo credit: U.S. Army / George C. Gross)

The little fellow was pleased at having his picture taken.

This is a view of the train from the rear, showing boxcars like those in picture 1.  On the hill to the left are people resting–some forever.  Some sixteen died of starvation before food could be brought to the train.

This is a closer view of the scene in the previous picture. Note how quickly the starved people have regained their sense of purpose and are scrounging about for berries and other food.

This view shows compartment cars.  Most of the train was made up of boxcars.  It looks as though one man at lower left is praying; others are sitting or lying on the ground.

They were crammed into all available space and the freight cars were packed with about 60 – 70 people.

This is Gina Rappaport, who spoke very good English and spent a couple of hours telling her story to the American troops. She was in the Warsaw ghetto under terrible conditions, and then was sent to Bergen-Belsen. 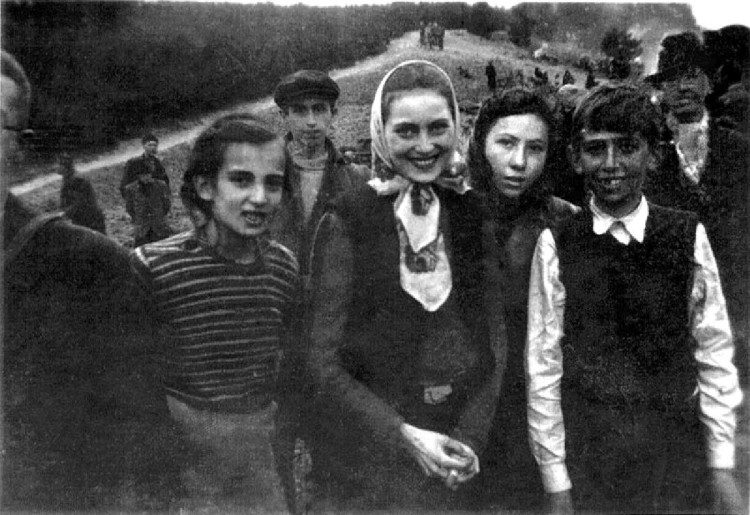 Most of these Jews were from Poland, Russia and other Eastern countries, so with the total destruction of their homes, loss of families and the serious prospects of coming under the jurisdiction of the Soviets, most were fearful about their future. Most chose the option of remaining in Germany, or the possibility of being repatriated to some other Western European countries. Eventually, many were finally repatriated to Israel, South American countries, for which many had passports, England, Canada and to the United States of America.

One thought on “The rescue of the Death train”