Vienna in 1913 was a vibrant cultural city. It was one of Europe’s power houses.Needless to say it attracted people from all over the continent and indeed the world.

Not was it only known for its musical heritage it was also known for its many fine coffee houses. today Viennese coffee is still enjoyed by many coffee drinkers, including myself, for it really is a treat.

One of Vienna’s coffee houses has made a special mark on history. Café Central.It was a place frequented by many of Vienna’s intellectuals and artists. It also had the nickname “Die Schachhochschule” or the Chess High school in English,because of the presence of many chess players who used the first floor for their games. 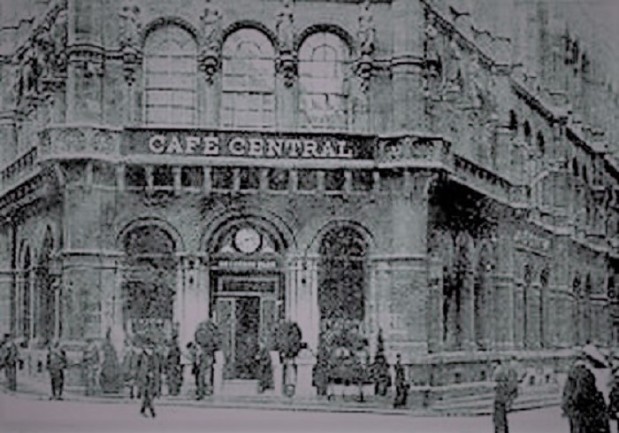 For a brief period in 1913 it was regularly frequented by guests who made an enormous impact on the planet’s history. In January 1913 , Adolf Hitler,Josip Broz Tito, Sigmund Freud, Joseph Stalin, and Leon Trotsky were guests of the Coffee house. There is a very good chance that at one stage they all were there at the same time.

Leon Trotzky was the editor of the newspaper Pravda at the time, he wrote about an encounter he had in the café with a man called Stavros Papadopoulos. He wrote:

“I was sitting at the table,when the door opened with a knock and an unknown man entered.He was short… thin… his greyish-brown skin covered in pockmarks… I saw nothing in his eyes that resembled friendliness.”

Stavros Papadopoulos was not the real name of the man, he had been born as Iosif Vissarionovich Dzhugashvili, but in later life was known as Josef Stalin.