One event that is often over looked in the wider context of WWII is one of the first actions of the war.

On September 1,1939 the Germans cut the phone and electricity lines to the Post office of Gdansk. At the time there were 56 people in the building. Combat engineer and Army Reserve 2nd lieutenant  Konrad Guderski. 42 Gdansk postal employees, ten postal employees from  the cities of Gdynia and Bydgoszcz, the building keeper with his wife and a 10-year-old daughter who lived in the complex.

Konrad Guderski had been dispatched to  Gdansk  earlier in 1939.

His task was to help organize the official and volunteer security staff at the Polish Post Office in Gdansk, because of the imminent threat of a German invasion.

Guderski was sent by the Ministry of Military Affairs in April 1939, to Gdansk.He was an engineer by trade but joined the army in 1934.

Of the 56 people in the Post office complex ,Konrad Guderski was the only one person working for the military.

At 4.45 on September 1st ,1939 the German battleship SMS Schleswig-Holstein started shelling the Polish positions on the Westerplatte, and in doing so fired the first shots of World War II. The ship had already been in Gdansk prior to September 1st. In a way similar as the Trojan horse. It had come to Gdansk as part of an annual  ceremonial visit in August. What wasn’t known by the polish authorities  that the ship had about 100 heavily armed infantry men on board.

Gdansk which was called Danzig at the time was technically a German city in Poland, about 90% of the population were ethnic Germans, The city also had SA and SS divisions ,also the police force were loyal to the Nazi regime.

Three ADGZ heavy armored cars were brought in by the police ,as the local SS,SA, the Police and some infantry reinforcements from the Schleswig Hosltein attacked the Post office. 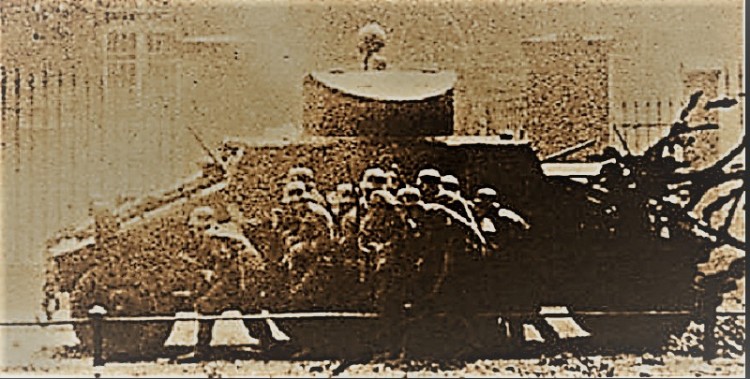 The Germand thought it was going to be an easy victory .The attack started at the same time, as the shelling of Westerplatte . It was,  even though the attackers were able to get entrance to the complex , the attack initially failed. Guderski though was killed by his own grenade while trying to stop the German advance.

The siege lasted 15 hours, After the Germans pumped burning gasoline into the basement, and used flamethrowers 5 people in the building were burned alive.

The rest of the Poles were allowed to surrender and leave the burning building. Six people managed to escape from the building, although two of them were captured the following days.The other 4 managed to survive the war.

Sixteen wounded prisoners were sent to the Gestapo hospital, where six subsequently died (including the 10-year-old daughter of the building keeper). The other 28 were first imprisoned in the police building and, after a few days, sent to Victorianism(a temporary prison for Poles living in Gdansk), where they were interrogated and tortured.

All the other defenders of the Post office were sentenced to death.

4 thoughts on “The fighting postmen of Gdansk”