The bombers had been on the way on a mission to bomb the German city of Gotha,where the Gothaer Waggonfabrik aircraft factory was producing Messerschmitt fighters and other Luftwaffe planes.

But due to poor visibility the mission was cancelled and the bombers were told to return to base to the RAF Bungay airbase. 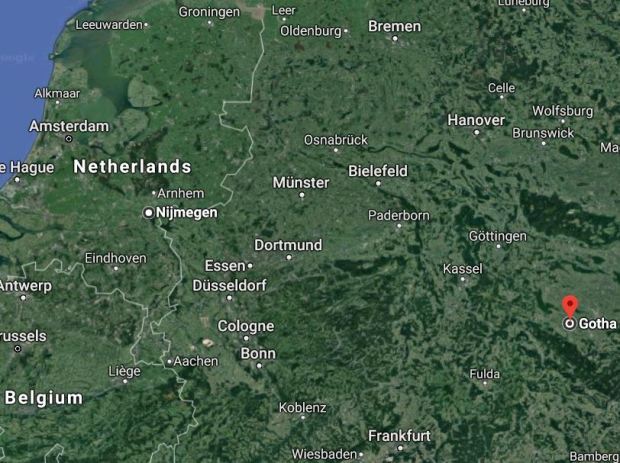 Initially it was reported that the bombing of Nijmegen had been a mistake, it was said that after the command to abort the Gotha mssion the bombers looked for alternative targets like the German cities of Kleve or Goch which are near the Dutch border.

However in reality the bombers  for targets of opportunity on the way back to Britain. The targets were found in the form of a railway emplacement near Nijmegen, a gasworks in Arnhem, and an industrial area in Enschede.

The devastation caused to of the city centre of Nijmegen was certainly not intented, according to the airmen’s reports. They had dropped the  bombs dropped too early.  a study by Dutch Historian Rosendaal indicated that the bombers were inexperienced. And those were not the only errors: not all the pilots realized they were targeting Nijmegen, nor did they rknowthat Nijmegen was occupied Dutch territory and that it would have needed  special clearance  required to bomb it.

The Germans were quick to use this incident as a propganda tool, They had accused the Dutch government in exile had given the go ahead to bomb Nijmegen.The Germand hung posters in several places  with the text ‘With friends like these, who needs enemies?’

Their propaganda efforts failed seven months later, the American ground troops were welcomed as heroes by the inhabitants.The propaganda had been counterproductive.

On that day more then 750 civilians were killed, which was close to the  amount of casualties of the bombing of Rotterdam , which was 900,at the start of the war.