I am very careful when it comes to calling someone a hero, for so many who are considered a hero , often aren’t. However in this case I can say that SRV-Stevie Ray Vaughan was one of my heroes. The man who made playing guitar look cool again. 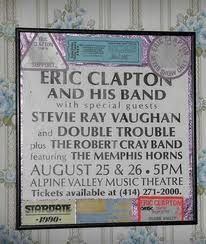 Some of the musicians boarded four Chicago-bound helicopters, which were waiting on a nearby golf course. Vaughan, along with three members of Eric Clapton’s entourage (agent Bobby Brooks, bodyguard Nigel Browne, and assistant tour manager Colin Smythe), boarded the third of the four helicopters—a Bell 206B Jet Ranger—flying to Meigs Field.

In Clapton: The Autobiography, Clapton explains that, contrary to rumors, his seat was not given to Vaughan, but three members of Clapton’s entourage were on board with Vaughan. According to a witness, there was haze and fog with patches of…