To most of you the names of these 2 towns will mean virtually nothing but it is where my roots are. I was born and raised in Geleen.

Sittard-Geleen  is a municipality in the southeastern Netherlands. It was formed in 2001 from the former municipalities Sittard, Geleen and Born.

The Netherlands was a neutral country, during WWI this neutrality had not been breached, however on the 10th of May 1940 the Germans breached the Dutch neutrality by invading the country.

Below are some pictures and stories of the period just before the start of WWII,during and after WWII of the Geleen Sittard regions and its surrounding villages.

Church wedding of a dutch Soldier in 1939 at the St Catharina Church,Grevenbicht. His comrades form a guard of honor. 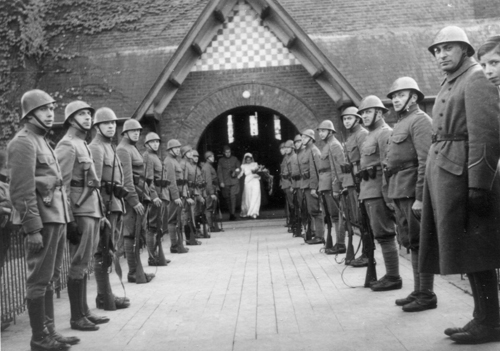 Dutch soldiers on parade on the Market square in Sittard, shortly before the invasion. Dutch troops had been mobilized for the eventuality the Germans would invade