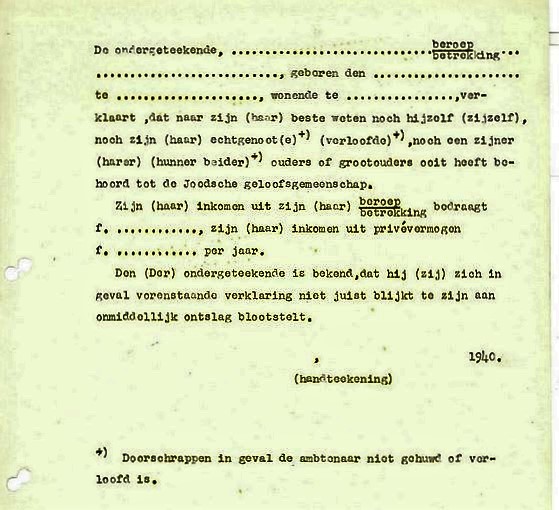 On  6 October 1940 every civil servant working in the Netherlands was given two forms. Form A declared that you were not Jewish, and thus Aryan, and form B – which had to be filled in in duplicate – was a declaration that you were Jewish. You had to sign one of the two forms and return it by 26 October 1940. The result of this move was that the German occupier could now identify all Jewish civil servants. They were soon dismissed from their government jobs.

Anyone with one or more Jewish grandparents (i.e. a grandparent who had been a member of the Jewish community) was considered to be a Jew and had to submit Form B (non-Aryan). Non-Jews submitted Form A (Aryan).

The declaration are sent out by the Dutch Civil Service without objection from the High Counsel, the highest Dutch Law colleger, whose president Lodewijk Ernst Visser is…

One thought on “Declaration of Aryan descent”