No this is not some science fiction story. Hitler and the Nazi’s really did have plans to bring back animals that had already been extinct and to an extend they succeeded.

He wanted to create an Aryan race of so-called superior beings, but Hitler and his Nazis didn’t stop at humans.  They were also trying to re-instate prehistoric animals that had been extinct for 9,000 years.They planned to bring back wild Auroch cows – which stood at 7ft to the shoulder and had giant horns – to hunt in ancient forests across Europe.

It was all part of the Nazi obsession with creating a connection to the primeval Germanic tribes of history, which they believed would give them added credibility with the German people.And it was overseen by Herman Goring – Hitler’s second in command and chief huntsman of the Third Reich – who sought a larger and more challenging beast to hunt.

This is one part of a larger story about how the Nazi party sought to give itself a longer history and a credibility and a sense of legitimacy with the German people by saying they weren’t something totally new but had this 2,000 year history going back to the Germanic tribes in the forest. So the creation of these animals is just one part of that effort to give themselves some history.For Goring, hunting was one of the greatest human activities and he believed there would be a special quality to these particularly wild and ferocious animals. He imagined repopulating large areas of Eastern Europe with these animals. They were bigger and more atrocious and more vicious and that was one of the attractions, because Goring knew hunting those animals would be much more of a challenge than hunting say a fox or a hare. It was the ultimate hunting challenge.

As with many Nazi policies, the level of secrecy Hitler ruled in has made it difficult for historians to make discoveries.Orders were given verbally and rarely written down and evidence of killings was covered up – by burning bodies and destroying concentration camps.But by examining fossilised bones of Aurochs and a war diary kept by a Nazi unit, researchers have been able to identify the Nazis’ plan. 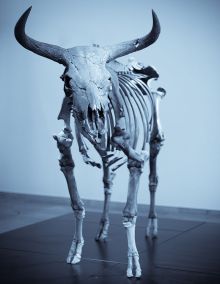 These animals were known as Heck Cattle, named after Lutz Heck a German zoologist.

Together with his brother Heinz Heck, also a zoologist and director of the largest zoological garden in southern Germany, Tierpark Hellabrunn in Munich, he started a selective breeding program, which attempted – based on the knowledge of animal genetics of the time – to “recreate” wild animal species that are today extinct, from various forms of the domestic animals whose ancestors they were (see “breeding back“).By their work they created breeds of cattle and horse – later named “Heck cattle” and “Heck horse” respectively, after their creators – that are today seen as not sufficiently similar to their ancestors to be called a successful resurrection, although Heinz and Lutz Heck believed they had “resurrected” the breeds by their efforts.

During World War II Heck took part in the pillaging of Warsaw Zoo, stealing the most valuable animals and taking them to German zoos. 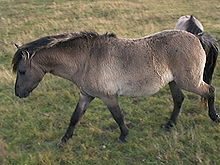 The 2 brothers had already started during the Weimar era in Germany  but the efforts really took shape once Goering got involved.

In 1932, the first bull that Heinz Heck believed to resemble the aurochs, named ″Glachl″, was born. It was a 75% Corsican and 25% (Gray cattle × Lowland × Highland × Angeln) cross individual. This bull and its father subsequently were bred into further breeds to increase weight. As a consequence, most modern Heck cattle go back to Central European milk- and meat cattle that were supplemented by cattle from other regions. Advocates of Heck cattle often claim that Heinz′ and Lutz′ breeding results looked largely identically ″proving the success″ of their experiment. However, Berlin and Munich Heck cattle did not look very similar.

In the German Zoo Duisburg, one Watussi cattle cow, which is a half-zebuine breed, was crossed with a Heck bull. Some modern Heck cattle, mainly those displaying large and thick horns, descend from this crossbred offspring. In some locations, primitive Southern European cattle, such as Sayaguesa Cattle and Chianina, have been crossed into Heck cattle herds aiming to approach the aurochs in phenotypical characters. This cross-breed is called Taurus cattle.

There are about 2000 Heck cattle in Europe and few elsewhere. Heck cattle has been spread in German zoos because of the erroneous claim made by the Heck brothers that these cattle represent a resurrected aurochs and are proposed as animals suitable for conservation projects today. In Oostvaardersplassen in Flevoland near Lelystad (Netherlands), there are about 600 Heck cattle roaming freely. Weak animals often are shot by hunters in order to prevent unnecessary suffering.Other cattle are at the Falkenthaler Rieselfelder near Berlin. There are also Heck Cattle at the Nesseaue nature reserve near Jena, Thuringia and at the Grubenfelder Leonie nature reserve in Auerbach, Bavaria. There were about 100 registered in France in 2000. In 2009 nine cows and four bulls were imported to south west England from Belgium.[Derek Gow, a British conservationist who operates a rare breeds farm at Lifton near Okehampton in Devon, bought a herd of 13 Heck cattle from Belgium in 2009.The herd grew to 20 animals, but in January 2015 it was reported that Gow had had to slaughter most of them due to high levels of aggression, leaving just six