I got very excited when I heard the news that Mel Gibson was to take his seat on a Director’s chair again, this time to shoot a WWII movie called “Hacksaw Ridge”. Little did I know it was going to be a movie about a soldier who never fired a shot and yet became one of the greatest WWII heroes.

“The Japanese were out to get the medics. To them, the most hated men in our army were the medics and the BAR men… they would let anybody get by just to pick us off. They were taught to kill the medics for the reason it broke down the morale of the men, because if the medic was gone they had no one to take care of them. All the medics were armed, except me.”

What do you do with a soldier who doesn’t eat meat, refuses to train on Saturday, and won’t carry a gun or bayonet? In the case of Cpl. Desmond T. Doss, you give that soldier a Medal of Honor — and many thanks for saving over 75 lives. 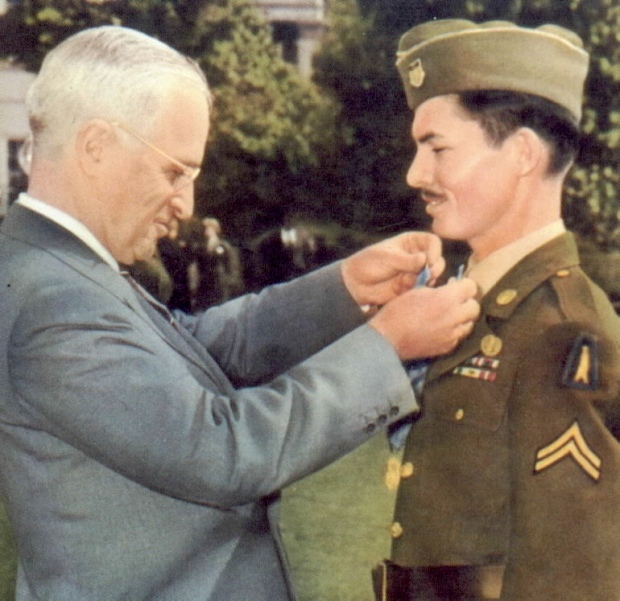 Desmond Thomas Doss (February 7, 1919 – March 23, 2006) was the first conscientious objector to receive the Medal of Honor and one of only three so honored (the others are Thomas W. Bennett and Joseph G. LaPointe, Jr.). He was a Corporal (Private First Class at the time of his Medal of Honor heroics) in the U.S. Army assigned to the Medical Detachment, 307th Infantry, 77th Infantry Division.

Drafted in April 1942, Desmond Doss refused to kill or carry a weapon into combat because of his personal beliefs as a Seventh-day Adventist. He consequently became a medic, and while serving in the Pacific theatre of World War II he helped his country by saving the lives of his comrades, at the same time adhering to his religious convictions. Doss was wounded three times during the war, and shortly before leaving the Army he was diagnosed with tuberculosis, which cost him a lung. Discharged from the Army in 1946,he spent five years undergoing medical treatment for his injuries and illness.

Because of religious believes and refusal to carry any kind of weapon he suffered a lot of verbal and physical abuse from his own peers, but he remained undeterred.

Doss’s first chance to prove himself came during the American assault on the Japanese-controlled island of Guam in 1944, when he courageously charged through knee-deep mud in driving rain on multiple occasions to reach wounded men anywhere on the battlefield, any time of the day or night, seemingly utterly oblivious to any bullets or mortars that happened to be choking the battlefield at the time. With his Medic insignia prominently displayed on his helmet and sleeve – an emblem that made him a big, meaty target for Japanese snipers eager to crush the American morale by capping their doctors – Doss accompanied hundreds of missions through the dense jungles of the small Pacific island over the course of several months of intense combat, routinely going out with search-and-destroy patrols even when he hadn’t actually even been assigned as the Medic for the unit. For his repeated bravery dragging wounded and dying men out of ultra-deadly killzones and giving them life-saving first aid, Doss earned his first of two Bronze Stars.

In April 1945, the war in the Pacific was raging and the 77th had landed on Okinawa after fierce combat in Guam and Leyte. After prayers from Doss, his unit captured the 400-foot Maeda Escarpment in an incredible sweep in which not one man was killed and only one minor injury was sustained. When a photographer arrived to capture the moment and asked how they pulled it off, Doss’s company commander answered, “Doss prayed!”

After a month of continued fighting, the tide turned against the Americans on May 5. Almost immediately, at least 75 men fell wounded, and their comrades fell back and retreated to the base of Maeda Escarpment. Left at the top were the Japanese, the wounded  and Doss. Ignoring bursts of shells and artillery fire, Doss tended his injured comrades and began to lower wounded soldiers carefully from ropes to the base of the escarpment. Japanese would advance while Doss lowered yet another man, and the wounded men would shoot the advancing enemy so that Doss could continue his work

Desmond Doss died in 2006 at his home in Piedmont, Alabama, after being hospitalized for breathing troubles,the same day as another Medal of Honor recipient, David Bleak. He was buried in Chattanooga, Tennessee’s National Cemetery.

On August 30, 2008, a two-mile stretch of Alabama Highway 9 in Piedmont was named the “Desmond T. Doss, Sr. Memorial Highway.”

He was a resident of Lynchburg, Virginia in which a portion of US Route 501 near Peaks View Park is named in his honor. Local veterans of the area still honor this hero by decorating the signs marking this portion of road several times during the year, particularly around patriotic holidays and especially Memorial Day.