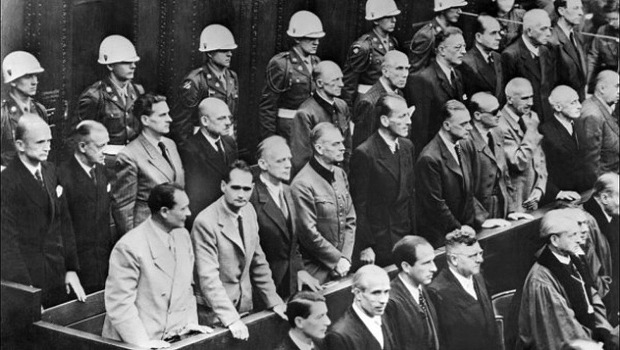 Below are just some of them.

Successor to Hess as Nazi Party Secretary. (Tried in absentia, and sentenced to hang.  DNA testing conducted in 1998 on human remains found in Berlin in 1972 showed that Bormann had committed suicide in 1945 by taking cyanide.)

Leader of the Kriegsmarine from 1943, succeeded Raeder. Initiator of the U-boat campaign. Became President of Germany following Hitler’s death.In evidence presented at the trial of Karl Dönitz on his orders to the U-boat fleet to breach the London Rules, Admiral Chester Nimitz stated that unrestricted submarine warfare was carried on in the Pacific Ocean by the United States from the first day that nation entered the war. Dönitz was found guilty of breaching the 1936 Second London Naval Treaty, but his sentence was not assessed on the ground of his breaches of the international law of submarine warfare.

Reich Law Leader 1933–1945 and Governor-General of the General Government in occupied Poland 1939–1945. Expressed repentance.He smiled politely, ‘Death by hanging,’ he said softly, nodding his head in acquiescence. ‘I deserved it and I expected it, as I’ve always told you. I am glad that I have had the chance to defend myself and to think things over in the last few months.

Hitler’s Minister of the Interior 1933–1943 and ReichProtector of Bohemia-Moravia 1943–1945. Authored the Nuremberg Race Laws.

Popular radio commentator, and head of the news division of the Nazi Propaganda Ministry. Tried in place of Joseph Goebbels.

Hitler’s Minister of Economics. Succeeded Schacht as head of the Reichsbank. Released due to ill health on 16 May 1957. Died 31 May 1960.

Goering came down first and strode into his cell, his face pale and frozen, his eyes popping. ‘Death!’ he said as he dropped on the cot and reached for a book. His hands were trembling in spite of his attempt to be nonchalant. His eyes were moist and he was panting, fighting back an emotional breakdown. He asked me in an unsteady voice to leave him alone for a while.

When Goering collected himself enough to talk, he said that he had naturally expected the death penalty, and was glad that he had not gotten a life sentence, because those who are sentenced to life imprisonment never become martyrs. But there wasn’t any of the old confident bravado in his voice. Goering seems to realize, at last, that there is nothing funny about death, when you’re the one who is going to die.Committed suicide the night before his execution.

Hess strutted in, laughing nervously, and said that he had not even been listening, so he did not know what the sentence was and what was more, he didn’t care. As the guard unlocked his handcuffs, he asked why he had been handcuffed and Goering had not. He was told it was probably an oversight with the first prisoner.Hitler’s Deputy Führer until he flew to Scotland in 1941 in attempt to broker peace with Great Britain. After trial, committed to Spandau Prison; died in 1987. 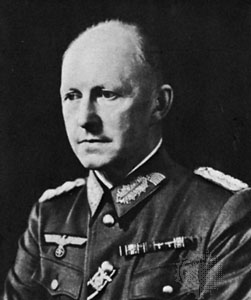 Wehrmacht Generaloberst, Keitel’s subordinate and Chief of the OKW’s Operations Division 1938–1945. Subsequently exonerated by German court in 1953, though the exoneration was later overturned, largely as a result of pressure by American officials. “Death – by hanging! – that, at least, I did not deserve. The death part – all right, somebody has to stand for the responsibility. But that -‘ His mouth quivered and his voice choked for the first time. ‘That I did not deserve.”

Highest surviving SS-leader. Chief of RSHA 1943–45, the Nazi organ made up of the intelligence service, Secret State Police and Criminal Police. Also had overall command over the Einsatzgruppen and several concentration camps.

Head of Oberkommando der Wehrmacht (OKW) 1938–1945.”Death-by hanging!” he announced his voice hoarse with intense shame. “That, at least, I thought I would be spared.”

Hitler’s favorite architect and close friend, and Minister of Armaments from 1942. In this capacity, he was ultimately responsible for the use of slave laborers from the occupied territories in armaments production. Expressed repentance.Speer laughed nervously. ‘Twenty years. Well; that’s fair enough. They couldn’t have given me a lighter sentence, considering the facts, and I can’t complain. I said the sentences must be severe, and I admitted my share of the guilt, so it would be ridiculous if I complained about the punishment.’ ”

Ambassador-Plenipotentiary 1935–1936. Ambassador to the United Kingdom 1936–1938. Nazi Minister of Foreign Affairs 1938–1945.Ribbentrop wandered in, aghast, and started to walk around the cell in a daze, whispering, ‘Death!-Death! Now I won’t be able to write my beautiful memoirs. Tsk! Tsk! So much hatred! Tsk! tsk!’ Then he sat down, a completely broken man, and stared into space.

Racial theory ideologist. Later, Minister of the Eastern Occupied Territories 1941–1945.His theories played a big part in the Nazi racial policies and were the foundation of the Wannsee conference.

Gauleiter of Thuringia 1927–1945. Plenipotentiary of the Nazi slave labor program 1942–1945.At the Nuremberg trials, Fritz Sauckel was accused of conspiracy to commit crimes against peace; planning, initiating and waging wars of aggression; war crimes and crimes against humanity. He defended the Arbeitseinsatz as “nothing to do with exploitation. It is an economic process for supplying labour”. He denied that it was slave labour or that it was common to deliberately work people to death (extermination by labour) or to mistreat them.

Instrumental in the Anschluss and briefly Austrian Chancellor 1938. Deputy to Frank in Poland 1939–1940. Later, Reich Commissioner of the occupied Netherlands 1940–1945. Expressed repentance.During the trial, Gustave Gilbert, an American army psychologist, was allowed to examine the Nazi leaders who were tried at Nuremberg for war crimes. Among other tests, a German version of the Wechsler-Bellevue IQ test was administered. Arthur Seyss-Inquart scored 141, the second highest among the defendants, behind Hjalmar Schacht. 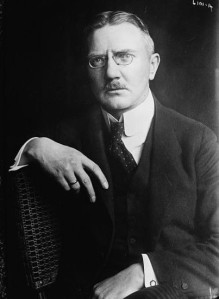 Gauleiter of Franconia 1922–1940. Publisher of the weekly newspaper, Der Stürmer

For his 25 years of speaking, writing and preaching hatred of the Jews, Streicher was widely known as ‘Jew-Baiter Number One.’ In his speeches and articles, week after week, month after month, he infected the German mind with the virus of anti-Semitism, and incited the German people to active persecution. … Streicher’s incitement to murder and extermination at the time when Jews in the East were being killed under the most horrible conditions clearly constitutes persecution on political and racial grounds in connection with war crimes, as defined by the Charter, and constitutes a crime against humanity.