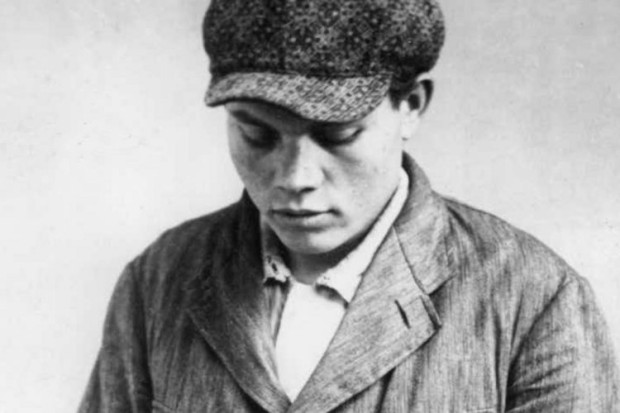 Marinus van der Lubbe was born in Leiden, on 13th January, 1909. His father, Franciscus Cornelis van der Lubbe, was a heavy drinker who left the family when he was seven years old. His mother died five years later. He was then raised by an older half sister and was brought up in extreme poverty. His school report said he was a ” talented boy of limited application”

After leaving school Lubbe worked as a bricklayer ,He was nicknamed Dempsey after boxer Jack Dempsey, because of his great strength.but after an industrial accident, where both his eyes were damaged and in 1925 he spent five months in hospital. He never fully recovered and was now unable to work and had to live on a small invalidity pension, OF 7.44 Guilders per week.

Van der Lubbe became interested in politics and spent most of his spare time reading and became a familiar figure in the Leyden Public Library. This included books by Karl Marx and in 1926 he joined the Communist Party of the Netherlands.Needless to say, the foundation of his self-taught knowledge was rather shaky, so that his hatred of capitalism was based less on Marxist science than on his youthful enthusiasm and Utopian dreams of heaven and earth.

After a few conflicts with his sister, Van der Lubbe moved to Leiden in 1927. There he learned to speak some German and founded the Lenin house, where he organized political meetings. While working for the Tielmann factory a strike broke out. Van der Lubbe claimed to the management to be one of the ringleaders and offered to accept any punishment as long as no one else was victimised, even though he was clearly too inexperienced to have been seriously involved. During the trial, he tried to claim sole responsibility and was purportedly hostile to the idea of getting off free.

In 1931 van der Lubbe went travelling. That year he went to Yugoslavia and Rumania. The following year he visited Austria and Poland. In April 1932 he was arrested. He wrote to his friend, Koos Vink: “When you receive this letter, I shall have spent a whole week in a Polish prison. I was given three weeks, for illegal entry, and when my time is up I shall return to the Netherlands.”

On his return he began mixing with different left-wing political groups. He rejected the political ideas of Joseph Stalin and became sympathetic to those of Leon Trotsky. He was also attracted to anarchist theories and eventually joined the Party of International Communists (sometimes known as Rade Communists). This party, which had only a handful of members in the Netherlands, was opposed to the very idea of discipline and leadership, and saw the salvation of the working class in spontaneous, individual action alone.

In the General Election of November 1932, the German Communist Party (KPD) won 100 seats in the Reichstag. The Social Democratic Party (SDP). did slightly better with 121 seats but it was the Nazi Party with 196, that had the greatest success. However, when Adolf Hitler was appointed Chancellor, in January 1933, the Nazis only had a third of the seats in Parliament.

Marinus van der Lubbe read about these events in the Dutch newspapers. He told his friend, Koos Vink, that he believed that Germany was on the verge of revolution. He decided he wanted to play a role in these events and on 3rd February 1933, he decided to walk to Berlin. He arrived fifteen days later. He was disappointed to discover that the KPD was not actively resisting Hitler’s rule. He decided to take matters into his own hands by setting a number of public buildings on fire.

On the morning of 25th February, van der Lubbe, bought matches and four packets of firelighters. That night he tried to set fire to a public toilet, the town hall and the Imperial Palace. In each case, the fire was discovered soon afterwards and no real damage was done.

At about 9.03 p.m., Hans Flöter, a young theology student, was walking past the south-western corner of the dark and deserted Reichstag when he heard the sound of breaking glass. When he turned round he saw a man with a burning object in his hand. He raced off and found a police officer, Sergeant Karl Buwert. When the two men reached the scene of the crime, they could see a man rushing from window waving a flaming torch.

Van der Lubbe said that he set the Reichstag building on fire as a cry to rally the German workers against fascist rule. He was brought to trial along with the head of the German Communist Party and three Bulgarian members of the Comintern. At his trial, Van der Lubbe was convicted and sentenced to death for the Reichstag fire. The other four defendants (Ernst Torgler, Georgi Dimitrov, Blagoi Popov, and Vasil Tanev) at the trial were acquitted. 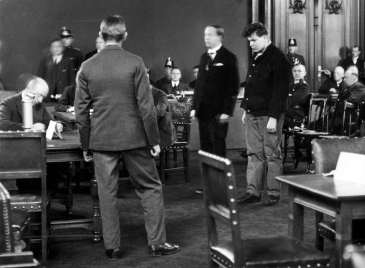 Buwert was joined by several other policemen and eventually entered the building. It was Constable Helmut Poeschel who arrested van der Lubbe at 9.27. He later reported that he “was a tall, well-built young man, completely out of breath and dishevelled”. Poeschel searched him and all he found was a “pocket knife, a wallet, and a passport”

On 23rd December, 1933, Judge Wilhelm Bürger announced that Marinus van der Lubbe was guilty of “arson and with attempting to overthrow the government”. Bürger concluded that the German Communist Party (KPD) had indeed planned the fire in order to start a revolution, but the evidence against Ernst Torgler, Georgi Dimitrov, Blagoi Popov and Vassili Tanev, was insufficient to justify a conviction.

On 9th January, 1934, when the Public Prosecutor informed Marinus van der Lubbe that his appeal for clemency had been rejected, and that he was to be beheaded the following morning, he answered: “Thank you for telling me: I shall see you tomorrow.” When he was led out of his cell, he looked calm and peaceful. Judge Wilhelm Bürger attended and saw the executioner, who was dressed in tails, top hat and white gloves, carried out the beheading. 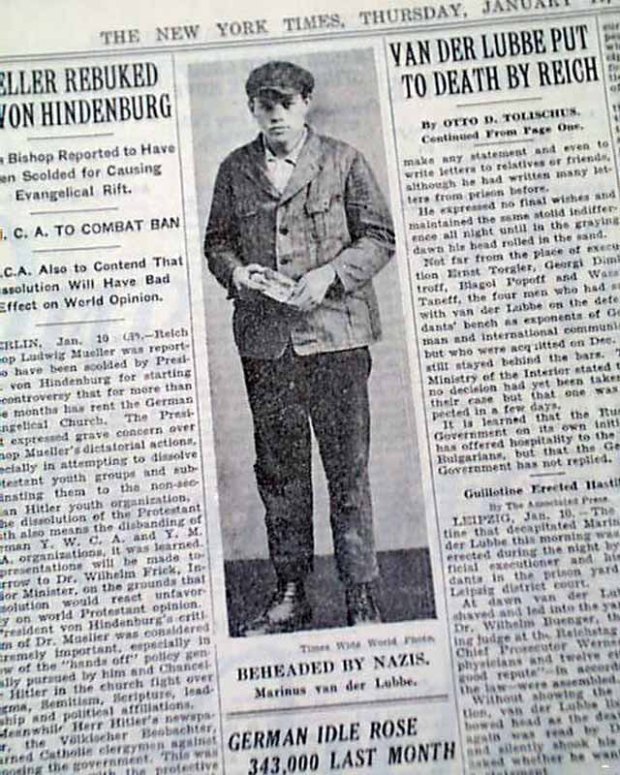 He was guillotined in a Leipzig prison yard on 10 January 1934, three days before his 25th birthday.

He was buried in an unmarked grave on the Südfriedhof (South Cemetery) in Leipzig. 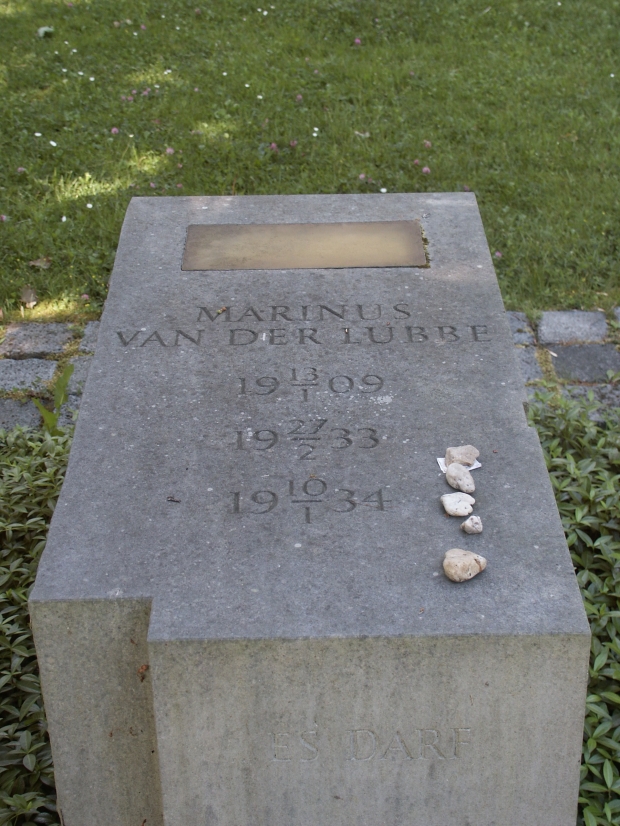 After World War II, moves by Marinus van der Lubbe’s brother, Jan van der Lubbe were made in an attempt to overturn the verdict against his brother. In 1967, his sentence was changed by a judge from death to eight years in prison. In 1980, after more lengthy complaints, a West German court overturned the verdict entirely but this was protested by the state prosecutor. The case was re-examined by the Federal Court of Justice of Germany for three years until, in 1983, the court made a final decision on the matter, overturning the result of the earlier 1980 trial on grounds that there was no basis for it, making it therefore illegal. However, on December 6, 2007, the Attorney General of Germany nullified the entire verdict and post-humously pardoned Van der Lubbe based on a 1998 German law that makes it possible to overturn certain cases of Nazi injustice. The determination of the court was based on the premise that the National Socialist regime was by definition unjust; and, since the death sentence in this case was politically motivated, it was likely to have contained an extension of that injustice. The finding was independent of the factual question of whether or not it was Van der Lubbe who actually set the fire.