Anton Adriaan Mussert ( 11 May 1894 – 7 May 1946) was one of the founders of the National Socialist Movement in the Netherlands (NSB) and its formal leader. As such, he was the most prominent Dutch fascist before and during World War II. During the war, he was able to keep this position, due to the support he received from the Germans. After the war, he was convicted and executed for high treason.

Anton Adriaan Mussert was born in Werkendam, Noord-Brabant, Netherlands. In the 1920s, he became involved in right-wing political movements that advocated a Greater Netherlands by annexing Dutch-speaking neighboring regions. On 14 Dec 1931, he abandoned his profession as a civil engineer and founded the National Socialist Movement political party (Nationaal-Socialistische Beweging), or NSB, along with other like-minded activists such as Cornelis van Geelkerken. 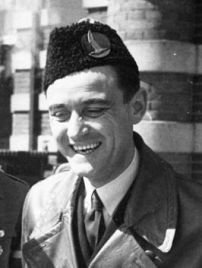 A fan of Benito Mussolini, Mussert ruled NSB along a similar model Mussolini had successfully used in Italy. As Italy grew closer to Germany, Mussert grew close to her as well, especially that Adolf Hitler’s vision to annex all German-speaking regions under German rule matched exactly his vision for the Netherlands. In Nov 1936, he met Hitler for the first time, and he remained in communications with Berlin from that point on until 1945.

His political agenda matched many of Germany’s, though Mussert was careful in not allowing the racism to taint Dutch politics.

A state of siege was declared by the Dutch government in April 1940 after the foreign correspondent for the New York Times, Vladimir Poliakov, spread the false news that Mussert’s followers were preparing to kidnap Queen Wilhelmina as part of a coup.

On 10 May, German troops invaded the Netherlands and Mussert was permitted to suppress all political parties other than the NSB.

Mussert was not appointed prime minister of the occupied nation. Instead, Austrian Nazi Artur Seyss-Inquart was appointed as the Reichskommissar, while Berlin summoned Mussert to control his uncooperative countrymen.

Mussert responded by working with the Gestapo in stopping resistance to the German occupation. On 21 June 1940 Mussert agreed to have NSB members train with the SS-Standarte ‘Westland’.

On 11 September, Mussert instructed Henk Feldmeijer, to organise the Nederlandsche SS (Dutch SS) as a division of the NSB. Mussert had nothing to do with the raising of an all-Dutch volunteer SS unit, the SS-Freiwilligen-Legion Niederlande. Regardless, thousands of Dutch citizens were arrested.

During the subsequent occupation, over 100,000 Dutch Jews were rounded up and transported to concentration camps in Germany, German-occupied Poland and German-occupied Czechoslovakia. By the time these camps were liberated, few Dutch Jews survived. 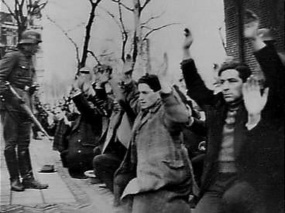 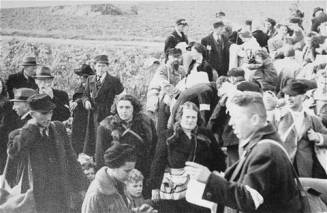 In February 1941, Mussert agreed and oversaw the formation of the 23rd SS Volunteer Panzer Grenadier Division Nederland, which trained in Hamburg. In November 1941, the legion was ordered to the Eastern front near Leningrad, under the overall command of Army Group North. The division acquitted itself well alongside its German allies, but suffered large losses.

On 8 December 1941, the independent Dutch administration in the Dutch East Indies declared war on Japan, the ally of Nazi Germany. After the Japanese invasion and occupation and the subsequent internment of 100,000 Dutch civilians and 50,000 military personnel, Mussert requested a meeting with Hitler. On 13 December 1942, Hitler declared Mussert to be “Leider van het Nederlandse Volk” (Leader of the Dutch People). 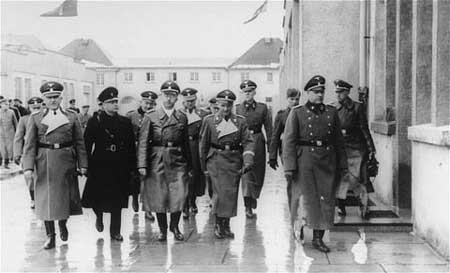 Having lost control of the Dutch SS and the military units that were serving in the Wehrmacht to his Nazi masters, Mussert had his last meeting with Hitler in May 1943, where he was told that he would never have political control. Following the unsuccessful Operation Market Garden in September 1944, that included a supporting strike by Dutch railway workers, the German authorities forbade food transport by rail, resulting in the Hongerwinter of 1944/45, during which 20,000 died.

By the end of the war, 205,901 Dutch men and women had died. The Netherlands had the highest per capita death rate of all German-occupied countries in Western Europe, 2.36%.Another 30,000 died in the Dutch East Indies, either while fighting the Japanese or in camps as Japanese POWs. Dutch civilians were held in those camps as well.

Upon the surrender of Germany, Mussert was arrested at the NSB office in The Hague on 7 May 1945. He was convicted of high treason on 28 November after a two-day trial, and was sentenced to death on 12 December. He appealed to Queen Wilhelmina for clemency. She refused. On 7 May 1946, exactly one year after his arrest and four days before his 52nd birthday, Mussert was executed by a firing squad on the Waalsdorpervlakte, a site near The Hague, where hundreds of Dutch citizens had been killed by the Nazi regime.