Some people believe that when the Germans invaded the Netherlands in May 1940 the life of its Jewish population changed over night.

This however was not the case. Like in other European countries the undermining and eventual eradication of Jewish life was a gradual process.

Until September 1940 very little changed,It was only then when the German occupation of the Netherlands started to have an impact of the 170,000 Jews living there.  A series of anti-Jewish measures started to male life  difficult.

Throughout 1941, the situation for Jews in the Netherlands got worse.  Jews were banned from public places, subjected to nighttime curfews and travel restrictions. Jewish students were also thrown out of schools and universities. Then, during late 1941, the Joodse Raad(Jewish Council) was tasked with providing lists of workers as the Germans opened a number of forced labour camps.

In may 1942 Jews were ordered to wear a yellow Star of David containing the word Jood (the Dutch word for Jew). As a sign of protest some Non Jewish Dutch also wore the Yellow star. 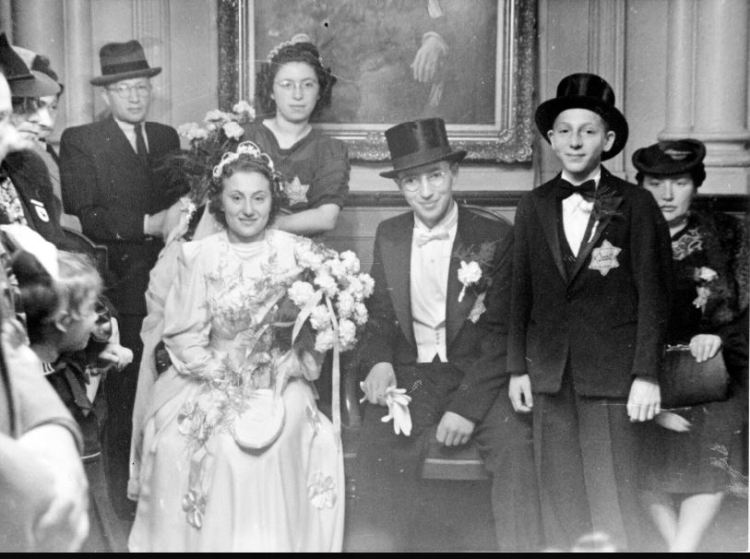 Deportations of Jews from the Netherlands began in the summer of 1942 and lasted until September 1944. Approximately 75% of the Dutch Jews did not survive the war.

A Substantial albeit minority part of the Dutch population being sympathetic to the Nazis ideology(or idiocy) .The NSB were the dutch equivalent of the NSDAP in Germany, they subscribed to the same Fascist  ideas.

However there were many Dutch who risked their own lives and that of their families to save their Jewish neighbours. he NV-Groep (Nameless Company). The group was set up by by the brothers Jaap en Gerard Musch.(picture is of Jaap}

They were a resistance group dedicated to helping Jewish children find hiding places. Many of the children they helped hide, survived the war. The picture below is a picture of some of the children being a bit brave but cheeky by forming the letters NV in a field, this picture was taken in 1943 while the war was at its height.

Unfortunately not everyone was as lucky as these children were.The geography of the Netherlands made escape difficult. The ruthless efficiency of the German administration and the willing cooperation of Dutch administrators and policemen doomed the Jews of the Netherlands.

I have come across many pictures of Dutch Jews being killed in death camps or pictures of their remains, and initially my thought was to end this blog with some of those pictures. However I changed my mind, although I do think it is important ti show the horrors of the Holocaust in the graphic ways, we do sometimes forget that the victims weren’t always victims., they were also people like you and me. Therefore below pictures of my  some of my fellow human beings as they were before they were butchered.

Jaap Hillesum brother of Etty on his 21st birthday.

Students of a Jewish secondary school during summer recess in 1940. I don’t know how may ,if any, survived the war.