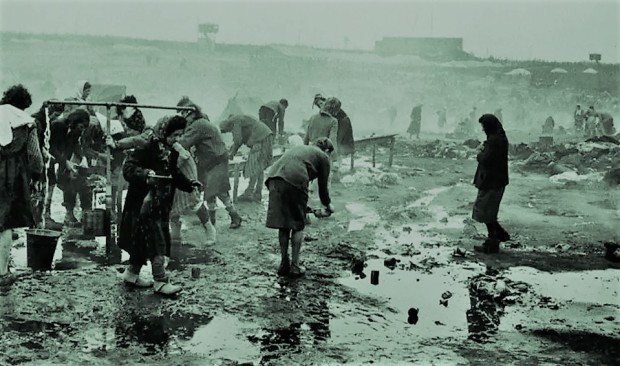 I was in two minds on how to do this blog. Initially I was considering adding graphic pictures to accompany the text , but then I thought that the pictures may just be too horrific and it would turn people away from reading the text. Additionally there would be a chance that this blog would be deleted on social media outlet, and there would be a chance that I’d get banned again.

Therefore on this occasion I believe the text will be more then sufficient to give an understanding how the conditions were in Bergen Belsen.

It was originally established as a prisoner of war camp, in 1940. However in 1943, parts of it became a concentration camp. The camp was liberated on April 15,1945. 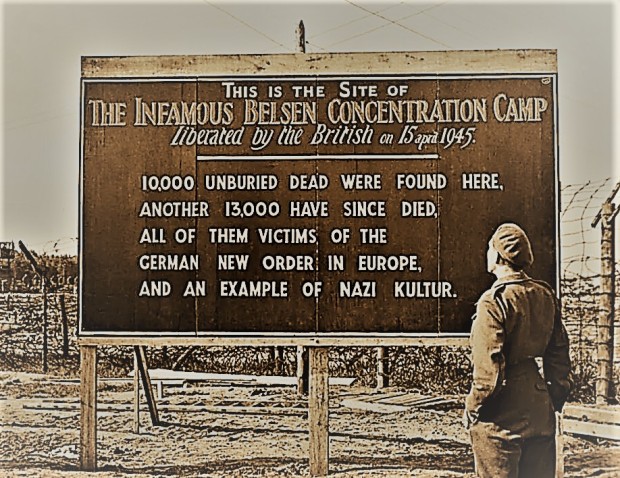 Below are 2 testimonies of witnesses, describing the horrors of the camp. The first account is a part of a description of conditions at the camp on 16 April, 1945, taken from file WO 235/19/76008 at the National Archives UK. The author’s name is not mentioned. 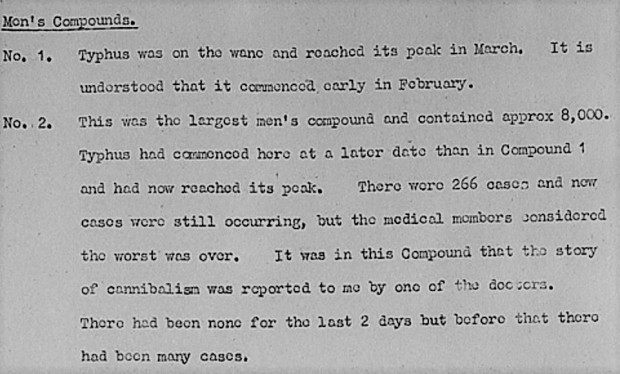 Typhus was on the wane and reached its peak in March. It is understood that it commenced early in February.

This was the largest men’s compound and contained approx 8,000. Typhus had commenced here at a later date than in Compound 1 and had now reached its peak. There were 266 cases and new cases were still occurring, but the medical members considered the worst was over. It was in this Compound that the story of cannibalism was reported to me by one of the doctors. There had been none for the last 2 days but before that there had been many cases. 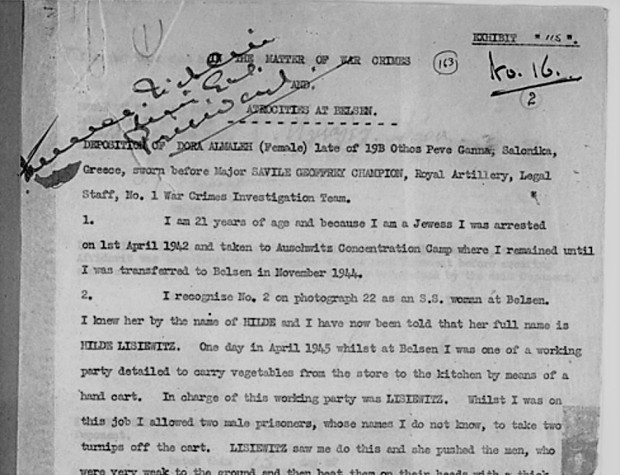 IN THE MATTER OF WAR CRIMES

1. I am 21 years of age and because I am a Jewess I was arrested on 1st April 1942 and taken to Auschwitz Concentration Camp where I remained until I was transferred to Belsen in November 1944.

2. I recognize No. 2 on photograph 22 as an S.S. woman at Belsen. I knew here by the name of HILDE and I have now been told that her full name is HILDE LISIEWITZ. One day in April 1945 whilst at Belsen I was one of a working party detailed to carry vegetables from the store to the kitchen by means of a hand card. In charge of this working party was LISIEWITZ. Whilst I was on this job I allowed two male prisoners, whose names I do not know, to take two turnips off the cart. LISIEWITZ saw me do this and she pushed the men, who were very weak to the ground and then beat them on their heads with a thick stick which she always carried. She then stamped on their chests in the region of the heart with her jack-boots. The men lay still clutching the turnips. LISIEWITZ then got hold of me and shook me until I started to cry. She the said ‘Don’t cry or I’ll kill you too’.

(In the picture below)Hilde Lisiewitz is second from the left) 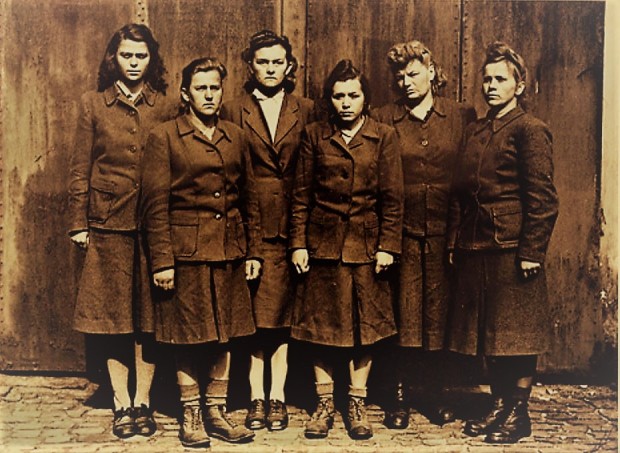 She then went away and after 15 minutes I went up to the men and touched them to see if they were still alive. I formed the opinion that they were dead. I felt their hearts and could feel nothing. They were cold to the touch like dead men. I then went away leaving the bodies lying there and I do not know what happened to them.

3. I recognize No. 1 on photograph No. 5 as an S.S. man at Belsen who was in charge of the bread store. I have now been told that his name is KARL EGERSDORF. One day in April 1945 whilst at Belsen I was working in the vegetable store when I saw a Hungarian girl, whose name I do not know, come out of the bread store nearby carrying a loaf of bread. At this moment EGERSDORF appeared in the street and at a distance of about 6 meters from the girl shouted ‘What are you doing here?’. The girl replied ‘I am hungry’ and then started to run away. EGERSDORF immediately pulled out his pistol and shot the girl. She fell down and lay still bleeding from the back of the head where the bullet had penetrated. EGERSDORF then went away and a few minutes later I went and looked at the girl. I am sure she was dead and men who were passing by looked at her and were of the same opinion. The bullet had entered in the centre of the back of the head.

(In the picture below,Karl Egersdorf is first on the left. ) 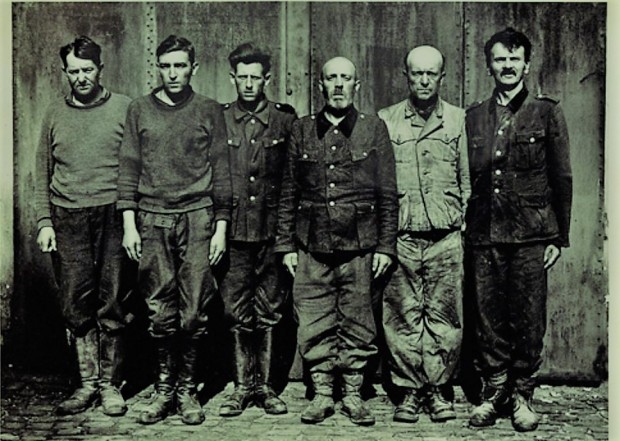 I do not know what happened to her body.

SWORN BY THE SAID DEPONENT DORA ALMALEH AT BELSEN THIS 13TH DAY OF JUNE 1945, BEFORE ME

Dated this 13th day of JUNE 1945. S.G.Champion[signed] Major R.A. I HEREBY CERTIFY that I have accurately translated this Affidavit to the said Deponent. Dated this 13th day of JUNE 1945. [signed] It appears to be a matter for medical evidence as to whether it is possible for a human body to have lost its warmth by death within 15 minutes, even where the man was in a weak state and had been savagely assaulted.