Reluctantly I call this remarkable hero a martyr simply because the word ‘martyr’ often has a negative connotation.But in his case he truly was a martyr for he sacrificed his live to save others rather then destroy them.

This man was simply a good man who saw evil for what it was and decided to something about it ,sacrificing his own life in the process. He wanted to ensure that evil wouldn’t flourish while he sat idly by. Bravely he saved many lives, giving up his own.

St. Maximilian Kolbe was born as Raymund Kolbe on January 8, 1894, in the Kingdom of Poland, part of the Russian Empire. He was a Polish Conventual Franciscan friar in the German death Camp of Auschwitz during World War II.

In his infancy Raymond seems to have been normally mischievous but one day, after his mother had scolded him for some mischief or other, her words took effect and brought about a radical change in the child’s behaviour. Later Raymond explained this change:‘That night I asked the Mother of God what was to become of me. Then she came to me holding two crowns, one white, the other red. She asked if I was willing to accept either of these crowns. The white one meant that I should persevere in purity, and the red that I should become a martyr. I said that I would accept them both.’

Thus early did the child believe and accept that he was destined for martyrdom. His belief in his dream coloured all his future actions.

One year after his vision, Kolbe and his elder brother, Francis joined the Conventual Franciscans. In 1910, Kolbe was given the religious name Maximilian, after being allowed to enter the novitiate, and in 1911, he professed his first vows.

Kolbe was sent to Rome in 1912, where he attended the Pontifical Gregorian University. He earned a doctorate in philosophy in 1915 there. From 1915 he continued his studies at the Pontifical University of St. Bonaventure where he earned a doctorate in theology in 1919[or 1922(sources vary). He organized the Militia Immaculata (Army of the Immaculate One) after witnessing demonstrations against Pope St. Pius X and Benedict XV. His goal was to work for the conversion of sinners and enemies of the Church, specifically, the Freemasons and he would so with the intercession of Mary.

In 1918, Kolbe was ordained a priest.In July 1919 he returned to the newly independent Poland, where he was active in promoting the veneration of the Immaculate Virgin Mary.He was strongly opposed to leftist – in particular, communist – movement.

In 1930 he went to Asia, where he founded friaries in Nagasaki and in India. In 1936 he was recalled to supervise the original friary near Warsaw. When Germany invaded Poland in 1939, he knew that the friary would be seized, and sent most of the friars home.

He opened up a temporary hospital to aid those in need. When his town was captured, Kolbe was sent to prison but released three months later. Kolbe refused to sign a document that would recognize him as a German citizen with his German ancestry and continued to work in his monastery, providing shelter for refugees – including hiding 2,000 Jews from German persecution. After receiving permission to continue his religious publishing, Kolbe’s monastery acted as a publishing house again and issued many anti-Nazi German publications.

Inevitably, the community came under suspicion and was watched closely. Then in May 1941 the friary was closed down and Maximilian and four companions were taken to the deathcamp Auschwitz, where they worked with the other prisoners.

“Dear Mama, At the end of the month of May I was transferred to the camp of Auschwitz. Everything is well in my regard. Be tranquil about me and about my health, because the good God is everywhere and provides for everything with love. It would be well that you do not write to me until you will have received other news from me, because I do not know how long I will stay here. Cordial greetings and kisses, affectionately. Raymond.”

One day an SS officer found some of the heaviest planks he could lay hold of and personally loaded them on the Franciscan’s back, ordering him to run. When he collapsed, the SS officer kicked him in the stomach and face and had his men give him fifty lashes. When the priest lost consciousness the Nazis threw him in the mud and left him for dead. But his companions managed to smuggle him to the camp infirmary – and he recovered. The doctor, Rudolph Diem, later recalled:‘I can say with certainty that during my four years in Auschwitz, I never saw such a sublime example of the love of God and one’s neighbor”

Continuing to act as a priest, Kolbe was subjected to violent harassment, including beating and lashings, and once had to be smuggled to a prison hospital by friendly inmates.At the end of July 1941, three prisoners disappeared from the camp, prompting SS-Hauptsturmführer Karl Fritzsch, the deputy camp commander, to pick 10 men to be starved to death in an underground bunker to deter further escape attempts.

When one of the selected men, Franciszek Gajowniczek, a Polish army sergeant ,cried out, “My wife! My children!”, 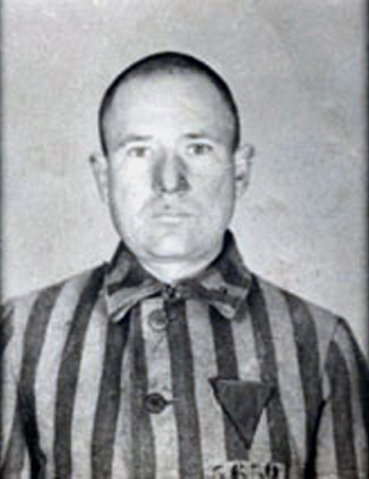 Kolbe volunteered to take his place.Father kolbe pointed with his hand to the condemned Franciszek Gajowniczek and repeated ‘I am a Catholic priest from Poland; I would like to take his place, because he has a wife and children.’

According to an eye witness,Bruno Borgowics an assistant janitor at that time, in his prison cell, Kolbe led the prisoners in prayer to Our Lady. Each time the guards checked on him, he was standing or kneeling in the middle of the cell and looking calmly at those who entered.

“The ten condemned to death went through terrible days. From the underground cell in which they were shut up there continually arose the echo of prayers and canticles. The man in-charge of emptying the buckets of urine found them always empty. Thirst drove the prisoners to drink the contents. Since they had grown very weak, prayers were now only whispered. At every inspection, when almost all the others were now lying on the floor, Father Kolbe was seen kneeling or standing in the centre as he looked cheerfully in the face of the SS men. 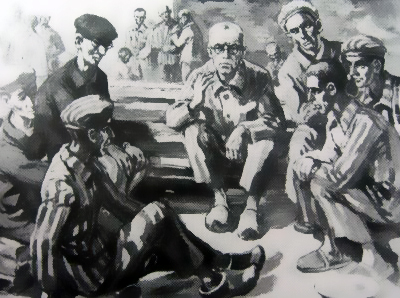 Father Kolbe never asked for anything and did not complain, rather he encouraged the others, saying that the fugitive might be found and then they would all be freed. One of the SS guards remarked: this priest is really a great man. We have never seen anyone like him”

Two weeks passed in this way. Meanwhile one after another they died, until only Father Kolbe was left. This the authorities felt was too long. The cell was needed for new victims. So one day they brought in the head of the sick-quarters, a German named Bock, who gave Father Kolbe an injection of carbolic acid in the vein of his left arm. Father Kolbe, with a prayer on his lips, himself gave his arm to the executioner. Unable to watch this I left under the pretext of work to be done. Immediately after the SS men had left I returned to the cell, where I found Father Kolbe leaning in a sitting position against the back wall with his eyes open and his head drooping sideways. His face was calm and radiant ..

After two weeks of dehydration and starvation, only Kolbe remained alive. “The guards wanted the bunker emptied, so they gave Kolbe a lethal injection of carbolic acid. Kolbe is said to have raised his left arm and calmly waited for the deadly injection. His remains were cremated on 15 August, the feast day of the Assumption of Mary.

Kolbe’s recognition as a Christian martyr also created some controversy within the Catholic Church.While his ultimate self-sacrifice of his life was most certainly considered saintly and heroic, he was not killed strictly speaking out of odium fidei (hatred of the faith), but as the result of an act of Christian charity. Pope Paul VI himself had recognized this distinction at his beatification by naming him a Confessor and giving him the unofficial title “martyr of charity”. Pope John Paul II, however, when deciding to canonize him, overruled the commission he had established (which agreed with the earlier assessment of heroic charity), wishing to make the point that the systematic hatred of (whole categories of) humanity propagated by the Nazi regime was in itself inherently an act of hatred of religious (Christian) faith, meaning Kolbe’s death equated to martyrdom.

Kolbe has also been accused of antisemitism based on the content of newspapers he was involved with, as they printed articles about topics such as a Zionist plot for world domination.Slovenian sociologist Slavoj Žižek criticized Kolbe’s activities as “writing and organizing mass propaganda for the Catholic Church, with a clear anti-Semitic and anti-Masonic edge.”However, a number of writers pointed out that the “Jewish question played a very minor role in Kolbe’s thought and work”. On those grounds allegations of Kolbe’s antisemitism have been denounced by Holocaust scholars Daniel L. Schlafly, Jr. and Warren Green, among others.

During World War II Kolbe’s monastery at Niepokalanów sheltered Jewish refugees,and, according to a testimony of a local: “When Jews came to me asking for a piece of bread, I asked Father Maximilian if I could give it to them in good conscience, and he answered me, ‘Yes, it is necessary to do this, because all men are our brothers.'”

Kolbe’s alleged antisemitism was a source of the controversy in the 1980s in the aftermath of his canonization. Kolbe is not yet recognized as Righteous Among the Nations. 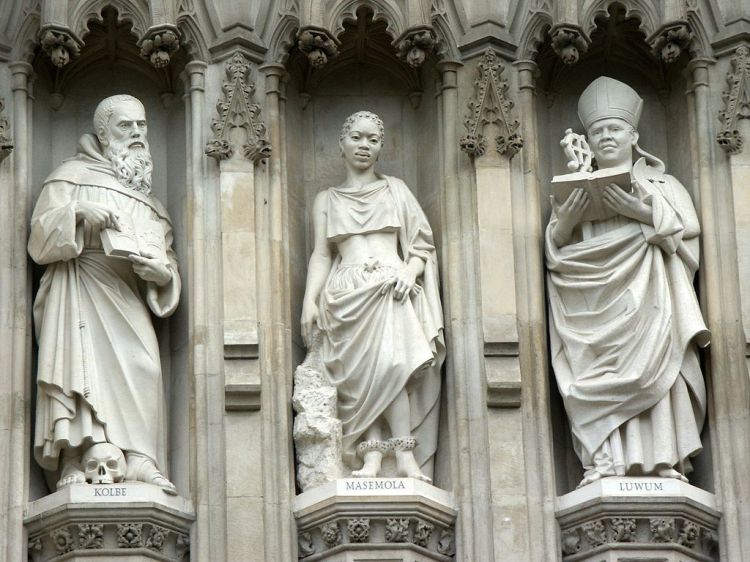 (The statue of Kolbe (left) above the Great West Door of Westminster Abbey.) 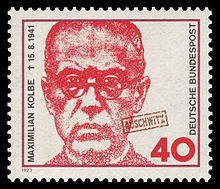 One thought on “Maximilian Kolbe: He died, doing good.”