What a tremendous feeling it must have been to accuse and identify  those who committed awful crimes, without the fear of retaliation. Probably it wasn’t even out of revenge but with a feeling of getting justice done.

On the other side how panicking it must have been for those criminals when the finger was pointed at them.Unfortunately we know that the majority of them still got away with no or lenient sentences.

The above picture depicts a liberated Russian inmate pointing an identifying and accusing finger at a Nazi guard who was especially cruel towards the prisoners in Buchenwald camp.There’s something really fascinating about this picture. We can only see so much of the prisoner’s expression here, but that finger means so much. Days, maybe even hours earlier, that prisoner might have been afraid to cross paths with or even make eye contact with this man. 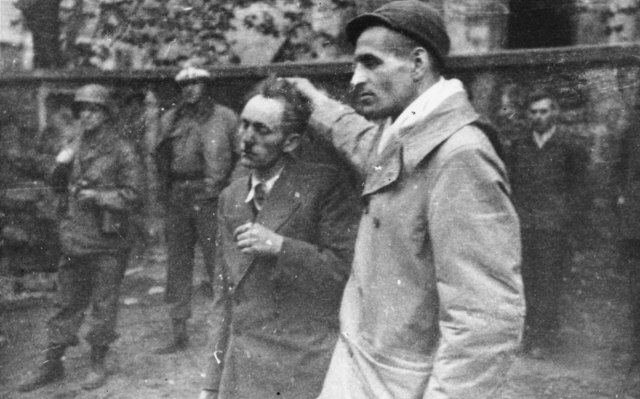 Concentration Camp prisoner holding German at bayonet point after liberation of his camp.How tempted he must have been to just pull the trigger. 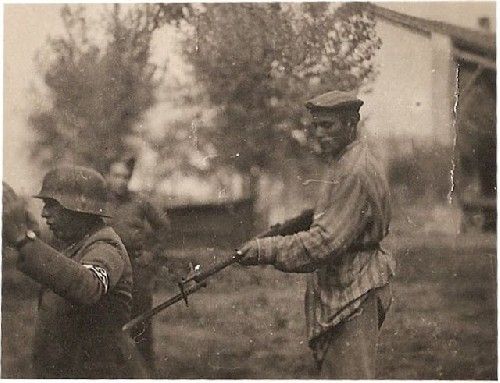 Former inmates of Dachau Concentration Camp moments away from executing an SS guard with a shovel.

A freed prisoner fights a German soldier who was recently captured by the U.S soldiers at the dachau concentration camp, the Americans are watching the fight continue.

German soldiers react to footage of concentration camps, 1945.I wonder did they identify themselves and their mates in the footage, or what the crimes they committed,and did they care?

Another view of this scene that was taken from the back of the theater.

One thought on “Identifying evil”