Don’t worry I haven’t suddenly gone pornographic in my blogs, but in this Political Correct era I thought it better to warn people upfront that this blog may contain some sexual references, because God forbid imagine if I offended anyone.

During World War II venereal disease(or STD’S/STI’s) was a serious problem for the US Army and Navy. In some hospitals one out of eight service men had been infected with  some form of venereal disease. Two of the worst venereal diseases known to the Medical Department during the Second World War were gonorrhea and syphilis. As a consequence  the majority of treatment and awareness programs had great emphasis on these two infections in particular. 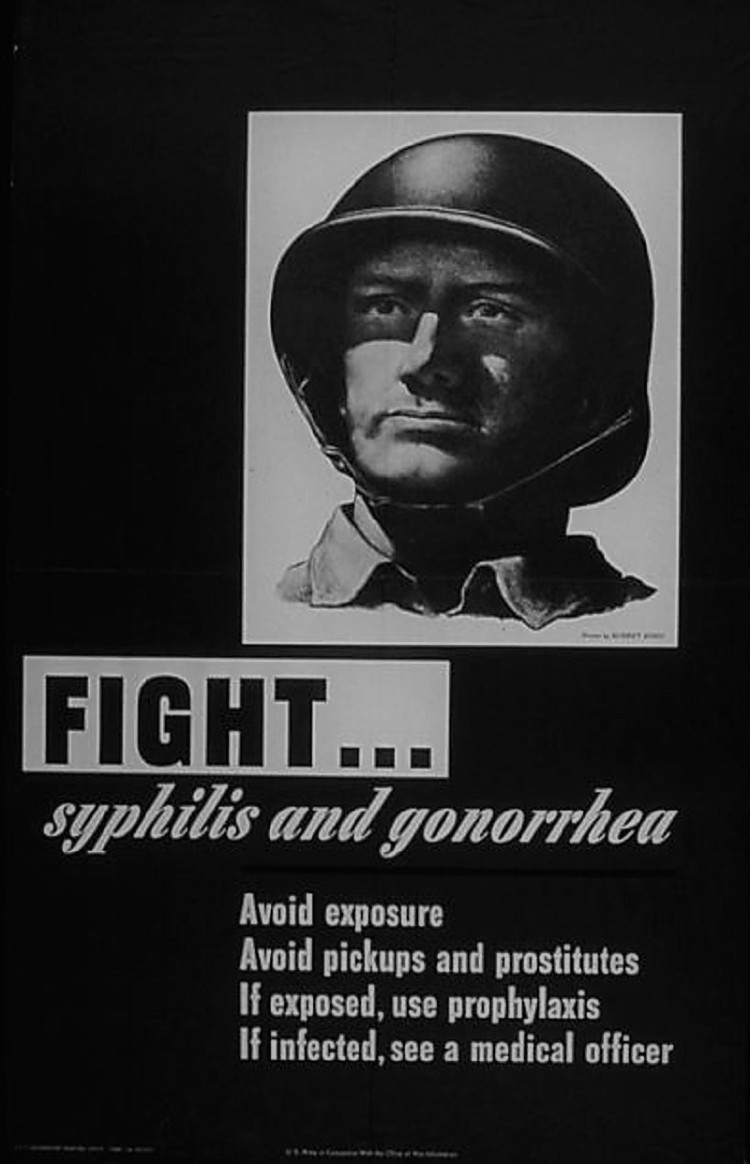 However it wasn’t only in the awareness programs, there was also a preemptive element to this. Many American women,mainly those involved in prostitution but also other women, were detained and subjected to invasive examinations.

On June 13, 1942 a woman by the name of Billie Smith was arrested in a hotel room in Little Rock, Arkansas, and was charged with prostitution and violation of the state’s immorality laws. Smith pleaded  guilty and paid the fine of $10—equivalent to $150 toda, but her problems didn’t stop there.

Little Rock’s health officer advised Smith that he was going to have to undergo a medical examination. He suspected she had a sexually transmitted infection. The health officer took vials of Smith’s blood for a syphilis test, and  examined her vagina for signs of gonorrhea. While awaiting the results of the blood test, Smith waited behind bars, in the Pulaski County jail.

After a day, the test results were back: Smith had syphilis; what’s more, the health officer said she had gonorrhea, too. He ordered that she be quarantined in a detention hospital in Hot Springs, Ark.

Three days after her arrest, she petitioned for a writ of habeas corpus(a court order demanding that a public official (such as a warden) deliver an imprisoned individual to the court and show a valid reason for that person’s detention) arguing that the quarantine amounted to unlawful imprisonment.However Smith’s condition posed too much of a threat, the court argued, for it to do anything but let the quarantine stand. Billie Smith escaped but was captured in a Memphis hotel, a month after she fled and fined $127 for several crimes, including prostitution.

She  was sent to d an “isolation unit” for STI treatment. It wasn’t until the end of 1942 that she was returned to the Pulaski County jail, and then eventually to the detention center in Hot Springs.

But that  still wasn’t the end of her woes. After just a few days in the Hot Springs facility, Smith and another woman attempted to escape, and, after this, the Hot Springs authorities refused to take them back. Smith remained behind bars for a few more weeks, but she successfully avoided spending her sentence in Hot Springs.

But Sexual transmitted infections or VD’s weren’t the only problem. In a publication on December 11, 1944 the UK based Pathfinder Magazine it was reported :

“A new problem of the war is the fact that children are born to married women whose husbands have been long overseas… Department of Labor figures show that more than twice as many illegitimate children were born this year than in 1942.”

We may judge these women harshly now, and maybe to an extend understandably, but it is natural to have sexual urges, and it doesn’t take much to be comforted when your partner is gone for a prolonged time, additionally some of these women didn’t know in what state their husbands would return or if they would return at all.

One thought on “Sex- The hidden enemy during WWII.”