What would I do? Or, how much courage would I have? These are questions that haunt me in relation to the Holocaust? Questions which are becoming more and more relevant these days.

There was a time where I would jeopardize my life to defend my principles in relation to justice and the treatment of my fellow man. But now that I have a family of my own and people who depend on me, that dynamic has changed, I am not so sure what I would do now and I would not have an answer for the 2 questions at the start of this blog.

I am sure Benjamin Blankenstein must have asked himself similar questions, but he answered those questions by taking action.

Benjamin Blankenstein was a teacher at the local Christian elementary school in the town of Soestdijk (prov. Utrecht) in the Netherlands.He was married to Maria who stayed at home as a home maker , on Septenber 10, 1940 the couple had a baby girl,Fieke.Benjamin was 26 at the time, Maria was a few years older.

In 1943 Benjamin became an active member of the  resistance , part of the countrywide Landelijke Organisatie (LO),Him and his wife also had a 2nd baby daughter,Betty, that year.

The LO was an organization that assisted both Jews in hiding, and non-Jews wanted for resistance activity or evading forced labor in Germany.

Notwithstanding the gave dangers they could face the Blankensteins took the decision to hide Jews in their own home.

It was brought to Benjamin’s attention that the  Bernstein family from nearby Soest had been betrayed at an earlier hiding place. Benjamin and Maria gave refuge to Henry Bernstein, his wife Martha and their 14-year-old son Rolf, Jewish refugees from Düsseldorf, Germany.

On September 3, 1942 the Dutch police had issued the following statement.

“The mayor of Soest requested that the stateless Jews Henry Bernstein, his wife and their son Rolf Bernstein, all residing at 35a Kerkpad NZ in Soest and having violated the regulations by changing their place of residence without permission, be located, detained and brought to trial.”

The 2 families got on wonderful.In the evenings Benjamin would school Rolf so he would not fall behind in his education.

Unfortunately the families were betrayed. On June 5, 1944, while Benjamin was  at school. The police arrested the Bernsteins and looted the Blankensteins home About half an hour later , Benjamin was arrested at the school, and taken to prison in Amsterdam . Later he was sent to to the Vught concentration camp, aka Herzogenbusch concentration camp.

On September 5, 1944, with the Allied Forces approaching, Blankenstein was moved to camps in Germany and eventually died

The Bernsteins were taken from the Blankenstein home and deported. Henry and Rolf were murdered in Auschwitz.

Martha Bernstein survived the war. After  her return from the camp, ill and alone, she was again welcomed by Maria Blankenstein.

On August 6. 2010. De city of Soest placed a Stolperstein, a stumbling stone, which is a memorial to remember Benjamin Blankenstein. The memorial was placed outside their home on the  Van Straelenlaan 31. 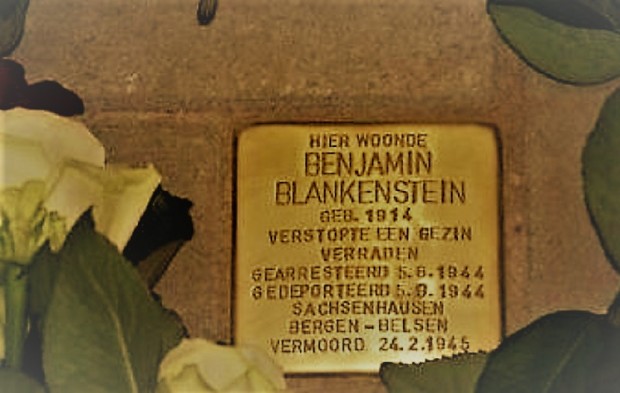 In 2006 Henry and Rolf Bernstein also got  memorials in the form of Stolper steine in their home in Hilden near Dusseldorf.