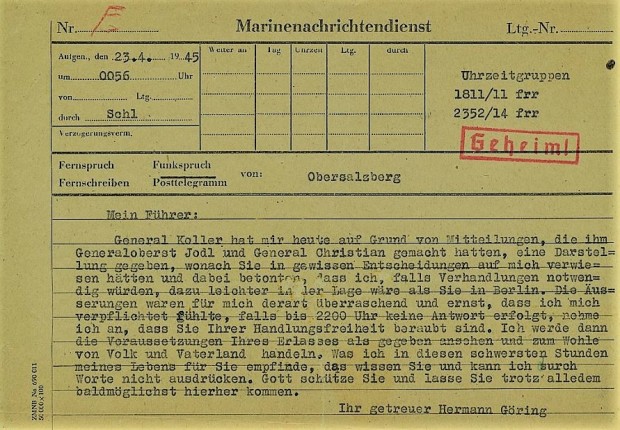 On April 22,1945 Hitler had publicly admitted that the war was lost.He also had said that Göring was in a better position to negotiate a peace deal.

Previously on June 29,1941 a week into  the start of Operation Barbarossa, Hitler had issued a decree stating that in the event of his death. or if Hitler ever lost his freedom of action;by way of incapacity, disappearance or abduction;Göring was to act as Hitler’s deputy, with full power to act on Hitler’s behalf.

On April 23,1945 Göring sent a telegram to Hitler indicating that he would take over as the leader of Germany if Hitler would not reply by 22:00 PM.

General Koller today gave me a briefing on the basis of communications given him by Colonel General Jodl and General Christian, according to which you had referred certain decisions to me and emphasized that I, in case negotiations would become necessary, would be in an easier position than you in Berlin. These views were so surprising and serious to me that I felt obligated to assume, in case by 2200 o’clock no answer is forthcoming, that you have lost your freedom of action. I shall then view the conditions of your decree as fulfilled and take action for the wellbeing of Nation and Fatherland. You know what I feel for you in these most difficult hours of my life and I cannot express this in words. God protect you and allow you despite everything to come here as soon as possible.

Hitler was not happy with this and branded Göring a traitor and stripped him of all powers and appointed Joseph Goebbels and Karl Dönitz as his successors.

Even in the last days they were still delusional.