Operation Foxley was a 1944 plan to assassinate Adolf Hitler, conceived by the British Special Operations Executive (SOE). Although detailed preparations were made, no attempt was made to carry out the plan. Historians believe the most likely date for an attempt would have been 13–14 July 1944, during one of Hitler’s visits to the Berghof.

One of the first actual British plans to assassinate Hitler was to bomb the special train “Amerika” (in 1943 renamed “Brandenburg”) he travelled in; SOE had extensive experience of derailing trains using explosives. The plan was dropped because Hitler’s schedule was too irregular and unpredictable: stations were informed of his arrival only a few minutes beforehand. 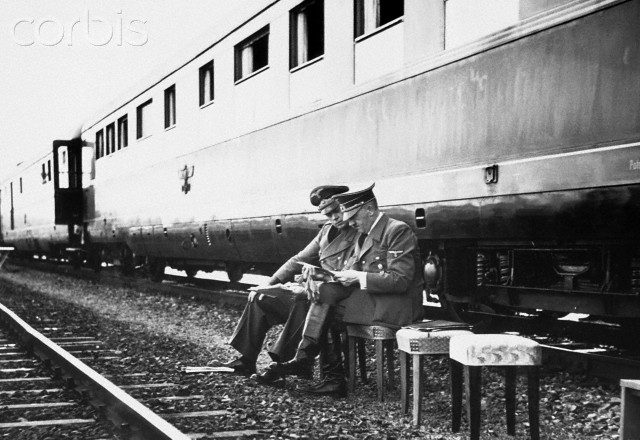 Another plan was to put some tasteless but lethal poison in the drinking water supply on Hitler’s train. However, this plan was considered too complicated because of the need for an inside man.

Although detailed planning was done to facilitate the attempt, it was never put into action.  SOE had several plans on taking out Germany’s Führer, including blowing up his train or by using poison. Neither of those had much of a chance of success. The SOE then planned on using a sniper to kill Hitler when he visited the Berghof, Hitler’s home in the Obersalzberg of the Bavarian Alps near Berchtesgaden, Bavaria.

SOE became aware of a facet of Hitler’s routine that made the attempt possible. One of his former security guards was captured in the fighting in Normandy during the early summer of 1944. This prisoner revealed that while at the Berghof, Hitler always took a 20-minute morning walk just after 10 a.m.and have breakfast at a teahouse on the premises. They learned that Hitler wanted liked to be left alone during this walk, leaving him unprotected along the edge of a wooded area, where he was out of sight of sentry posts. The Berghof was part of a large complex on the Obersaltzberg.   Many high-ranking Nazi’s had houses there so that they could relax in comfort when Hitler was there. Whenever Hitler was at the Berghof a Nazi flag was hoisted from the main house and could be seen from a café below in the town of Berchtesgaden.

The plan was for a sniper, armed with a Mauser Kar-98K and fitted with a scope to kill Hitler as he took his morning walk.

However, it wasn’t going to be easy. Although he felt secure within his compound and preferred to walk alone on most mornings, there were various sentries posted around the area anywhere between 100-500 meters from the path to the teahouse. The shot would be from a few hundred meters or failing that, he could be attacked while being driven back to the main house from the teahouse.

The obvious issue for the British was the actually getting the team into and out of Germany. The two men picked for the mission were a German speaking Pole and a British sniper. The British lucked out when a German POW named Dieser told SOE that he had an uncle named Heidentaler, who lived as a shopkeeper in Salzburg, about 12 miles away who was a die-hard anti-Nazi. Heidentaler also did frequent target practice less than 10 miles from the estate and knew the area well.

The British sniper practiced with a Kar-98K and became proficient with it practicing in similar conditions with a moving target. He was also given a Luger 9mm pistol with a suppressor attached so that any unfortunate souls that stumbled upon them at the estate would be eliminated.

The plan was to have the two men parachute into Germany, make their way to Salzburg where Heidentaler would hide the men and then transport them to Berchtesgaden disguised as German Mountain troops.

Everything was ready to go and the plan was submitted in November 1944. But SOE’s Deputy Head of their German Directorate, Lt. Colonel Ronald Thornley thought the assassination was a bad idea. Hitler, Thornley argued, may be turned into a martyr and the Germans’ loss of the war could be blamed on his loss and not a flawed overall strategy. Moreover, he said, it may cause a repeat of the WWI-WWII scenario where Germany may try to rise again.

Ultimately it was decided to scrap the plan, in no small part because Churchill’s advisors believed that Hitler, with absolute power, was a terrible strategist. With his increasing paranoia and poor decisions that were becoming more frequent, it was thought that his being in charge of the German war machine was a better alternative than removing him via an assassin’s rifle and having a more apt leader continuing the war.

Hitler is was deemed, was more valuable to the Allies alive than dead. The plan was scrapped. Just a few months later, with Germany in ruins, he committed suicide in Berlin.