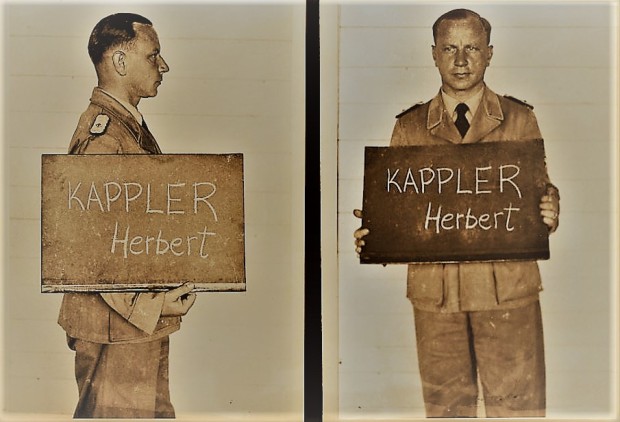 The killing of innocent lives is despicable enough but trying to make a profit out of it in the most deceitful way is beyond evil. Giving people hope that someway they will survive, where there really was no intention of sparing their lives,sickens me to the core.

Shortly after  the armistice between Italy and the Allied forces on 8 September 1943, the German military occupied Rome and Herbert Kappler was appointed as Chief of the Security Police and Security Service  for all SS and Order Police units deployed in Rome.

On September 26 Major Herbert Kappler, delivered a 36-hour ultimatum to the city’s Jewish community, requiring a ransom payment of fifty kilograms of gold, as well as 100 million Italian lire, to the SS headquarters in Rome , to avoid the mass arrest and deportation of Rome’s Jews to concentration camps.

The Jewish community ,via Israel Zolli, the Chief Rabbi of Rome told the Vatican about the ransom and asked if they could help because the Jews did not have the 50 kg of  gold to fulfill the ransom demand. The Vatican’s replied on September . 27,  that the Pope,Pius XII, was willing to lend,interest free, the 110 pounds of gold to the Jewish community.

But, by September. 28,  the Jewish community received donations of Jews and non-Jews exceeding 110 pounds. The loan of the Vatican was therefor no longer required.

However, on October 16, 1943 the Nazis, in conjunction with the Italians, conducted a roundup of the Jews in Rome and 2 days later on October 18,1,035 Jews were deported to Auschwitz.

Rabbi Israel Zolli survived and converted together with his 2nd wife and daughter ,to Catholicism in 1945.

In 1948, Kappler was tried by an Italian military tribunal and sentenced to life imprisonment in the Gaeta military prison. In 1977 he escaped prison, because he had been terminally ill, he only weighed 47 KG, His wife was able to carry him ot in a suitcase.6 months after his escape he died.