The Holocaust was a gradual process. The Nazis didn’t start mass extermination when they got into power. But gradually prepared the population by dehumanizing the Jewish people. Segregation, as shown in the photo above, was part of this. The point was not to provide a bench for Jews, it was to segregate the benches so that non-Jewish Germans would not have to sit on a “contaminated” bench. Being treated like below human life for years before hand was terrifying and probably emotionally exhausting.

A boy sits on a bench in a public park. The words painted on the bench say, “For Aryans only.” By law, German and Austrian Jews were prohibited from using many public facilities except those marked “For Jews only.” In some cities, Jews were not allowed in public parks, swimming pools, or movie theaters. Jews were allowed to shop in stores only during designated hours, usually late in the day when stores had run out of fresh foods.

Biology, along with political education, became compulsory. Children learnt about “worthy” and “unworthy” races, about breeding and hereditary disease. They measured their heads with tape measures, checked the colour of their eyes and texture of their hair against charts of Aryan or Nordic types, and constructed their own family trees to establish their biological, not historical, ancestry…. They also expanded on the racial inferiority of the Jews.

The Minister of the Interior, Wilhelm Frick, claimed that the idea that  teaching history should be objective was a fallacy of liberalism.  The purpose of history was to teach people that life was always dominated by struggle, that race and blood were central to everything that happened in the past, present and future, and that leadership determined the fate of peoples. Central themes in the new teaching including courage in battle, sacrifice for a greater cause, boundless admiration for the Leader and hatred of Germany’s enemies, the Jews.

Exploiting pre-existing images and stereotypes, Nazi propagandists portrayed Jews as an “alien race” that fed off the host nation, poisoned its culture, seized its economy, and enslaved its workers and farmers.

All school textbooks were withdrawn before new ones were published that reflected the Nazi ideology. Additional teaching materials were issued by Nazi teachers’ organizations in different parts of the country. A directive issued in January 1934 made it compulsory for schools to educate their pupils “in the spirit of National Socialism”

Illustration from a German textbook. The child is saying
“The Jewish nose is bent. It looks like the number six” (1938) 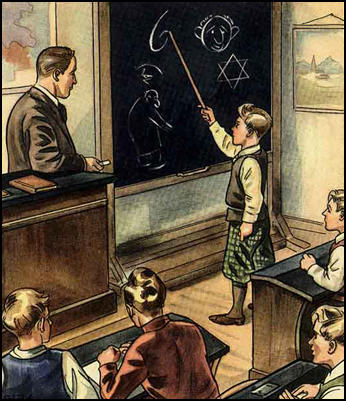 It has been estimated that by 1936 over 32 per cent of teachers were members of the Nazi Party. This was a much higher figure than for other professions. Teachers who were members, wore their uniforms in the classroom. The teacher would enter the classroom and welcome the group with a ‘Hitler salute’, shouting “Heil Hitler!” Students would have to respond in the same manner. It has been claimed that before Adolf Hitler took power a large proportion pf teachers were members of the German Social Democratic Party. One of the jokes that circulated in Germany during this period referred to this fact: “What is the shortest measurable unit of time? The time it takes a grade-school teacher to change his political allegiance. 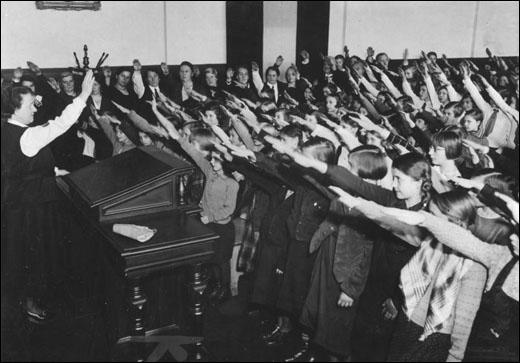 By 1934, all Jewish shops were marked with the yellow Star of David or had the word “Juden” written on the window.