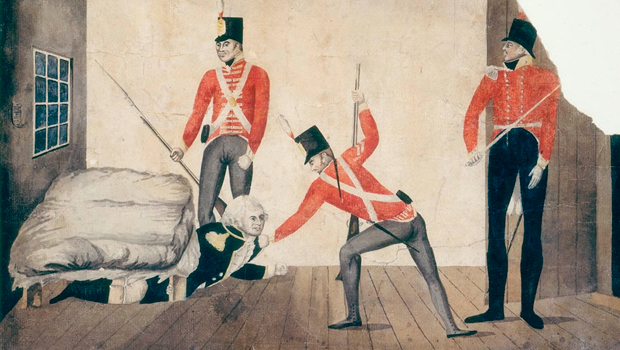 The Rum Rebellion of 1808 was the only successful armed takeover of government in Australian history. During the 19th century, it was widely referred to as the Great Rebellion.

The Governor of New South Wales, William Bligh, was deposed by the New South Wales Corps under the command of Major George Johnston, working closely with John Macarthur, on 26 January 1808, 20 years to the day after Arthur Phillip founded the first European settlement in Australia. Afterwards, the colony was ruled by the military, with the senior military officer stationed in Sydney acting as the lieutenant-governor of the colony until the arrival from Britain of Major-General Lachlan Macquarie as the new governor at the beginning of 1810.

Brandishing bayonets and advancing to the tune of ‘The British Grenadiers’, the uniformed officers surrounded the governor’s residence. It took about two hours to find Bligh hiding inside – a political cartoon (above) from the time shows three soldiers dragging him out from under a bed.

Bligh had been appointed in 1806 to lick the colony into shape and reign in the powerful NSW Corps.

He started by shutting down the rum trade, taking back land for public use, and listening to the concerns of poorer settlers.

Individuals like Major George Johnston, who led the NSW Corps, and the wealthy entrepreneur John Macarthur, soon felt threatened by Bligh’s moves to assert his authority.

Rising tensions and repeated clashes between Bligh and the military elite prompted Johnston to propose an armed takeover – today known as the Rum Rebellion. in reality rum had little to do with it. Some officers made money in the rum trade, but Bligh’s treatment of property rights and prime real estate was much more concerning to them. It wasn’t called the Rum Rebellion until 50 years later.