No this is not a piece on World War 2 or any other war for that matter,although it is often said that football is war.

The Battle of Santiago  is the name given to a particularly infamous football match during the 1962 FIFA World Cup. It was a game played between host Chile and Italy on 2 June 1962 in Santiago.The referee was Ken Aston, who later went on to invent yellow and red cards. 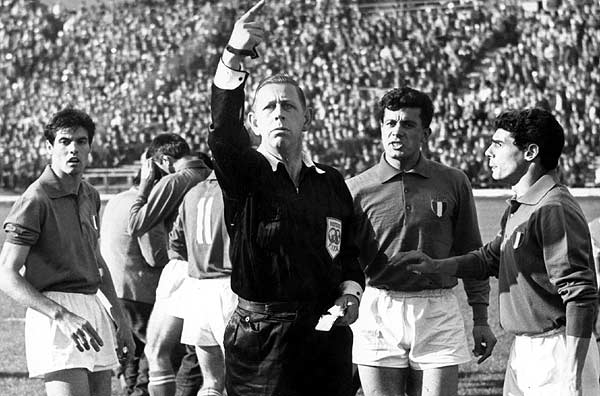 By 1962 the World Cup had recovered from the 12-year hiatus imposed upon it by World War II and had become a fixture.

The 1954 and ’58 tournaments had both been held in Europe.  The nations of North and South America threatened to boycott the tournament—as they had done in 1938—if that trend continued.  Most assumed that Argentina would be the choice, but the Chilean federation mounted an underdog candidacy and ended up running away with the vote.

In this Group 2 clash, already heightened tensions between the two football teams were exacerbated by the description of Santiago in crude terms by two Italian journalists Antonio Ghirelli and Corrado Pizzinelli; they had written that Santiago was a backwater dump where “the phones don’t work, taxis are as rare as faithful husbands, a cable to Europe costs an arm and a leg and a letter takes five days to turn up”, and its population as prone to “malnutrition, illiteracy, alcoholism and poverty. Chile is a small, proud and poor country: it has agreed to organize this World Cup in the same way as Mussolini agreed to send our air force to bomb London (they didn’t arrive). The capital city has 700 hotel beds. Entire neighborhoods are given over to open prostitution. This country and its people are proudly miserable and backwards.”Chilean newspapers fired back, describing Italians in general as fascists, mafioso’s, oversexed, and, because some of Inter Milan’s players had recently been involved in a doping scandal, drug addicts.The journalists involved were forced to flee the country, while an Argentinian scribe mistaken for an Italian in a Santiago bar was beaten up and hospitalised.

Chile’s organization and preparation of the tournament had been severely disrupted by the 1960 Valdivia earthquake, the strongest earthquake ever recorded in human history.

Articles in the Italian papers La Nazione and Corriere della Sera were saying that allowing Chile to host the World Cup was “pure madness”; this was used and magnified by local newspapers to inflame the Chilean population. The British newspaper the Daily Express wrote “The tournament shows every sign of developing into a violent bloodbath. Reports read like battlefront dispatches. Italy vs Germany was described as ‘wrestling and warfare'”

The first foul occurred within 12 seconds of the kick-off. Italy’s Giorgio Ferrini was sent off in the twelfth minute after a foul on Honorino Landa, but refused to leave the pitch and had to be dragged off by policemen.

Landa retaliated with a punch a few minutes later, but he was not sent off.

English referee Ken Aston overlooked a punch by Chilean Leonel Sánchez to Italian Mario David, which had come in retaliation for being fouled seconds earlier. When David kicked Sanchez in the head a few minutes later, he was sent off. 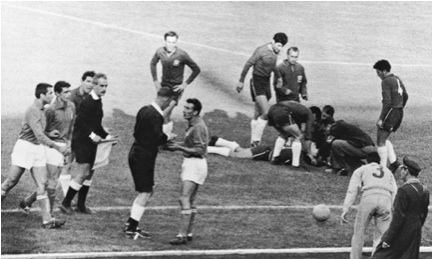 In the violence that continued, Sanchez broke Humberto Maschio’s nose with a left hook, but Aston did not send him off. The two teams engaged in scuffles and spitting, and police had to intervene three more times. Chile won the match 2–0.

When highlights from the match were shown on British television a couple of days later (not the same night, because film of matches still had to be flown back), the match was famously introduced by BBC sports commentator David Coleman as: “the most stupid, appalling, disgusting and disgraceful exhibition of football, possibly in the history of the game.