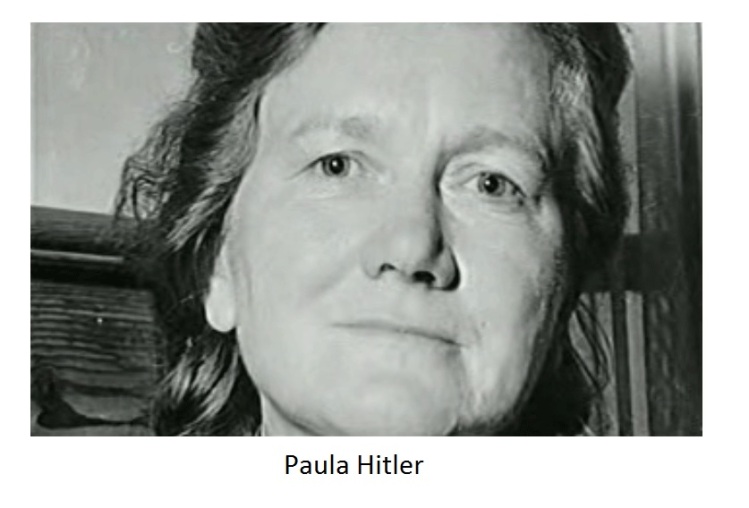 Can you hold people accountable for the actions of their siblings?

Generally not ,but in this case it is a bit more complicated, since the sibling was the most evil man ever to roam the earth.

It would have been easier if she just had admitted her brother’s wrong doings, rather then insisting that she could not believe he was able to have done the things that people said he had done. At the end of the day it is my opinion that complacency does make you an accomplice , but that is all it is , my opinion.

Paula Hitler (also known as Paula Wolff)(21 January 1896 in Hafeld, Austria– 1 June 1960 in Berchtesgaden) was the younger sister of Adolf Hitler and the last child of Alois Hitler, Sr. and his third wife, Klara Pölzl. 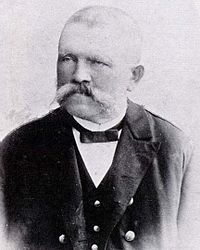 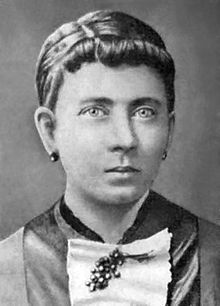 Paula Hitler was born on the 21st January 1896 and died on the 1st of June 1960. At the time of her various interviews with the US intelligence services she was in possession of a passport with the date of 21st November 1896 as her birth date (see interview dated 5th June 1946) however the first date is more accepted. She was born at Rauschergut in Hartfeld, Gemeinde Fischelham (upper Austria).

Paula was the younger sister of Adolf Hitler and the last child of Alois Hitler and his third wife Klara Pölzl. Paula was born in Hartfeld, Austria and was the only full sibling of Adolf Hitler to survive infancy after their brother Edmund died of measles in February 1900 .

After their mother died, Hitler turned over his share of their orphans pension to Paula when he went to Vienna to study art. Apparently, Paula lived with her half-sister Angela throughout childhood, but details are very sketchy. She did not see Adolf between 1908 and 1921, when he arranged to meet her in Vienna and to her delight, took her shopping.

Paula worked for an insurance company in Vienna until she was sacked for no other reason that the boss of the company disapproved of her brother’s political activity in Germany. Paula appealed to Adolf for help and he provided her with a monthly income and a larger sum each Christmas.

By her own account, after losing a job with a Viennese insurance company in 1930 when her employers found out who she was, Paula received financial support from her brother (which continued until his suicide in 1945), lived under the assumed family name Wolff at Hitler’s request (this was a childhood nickname of his which he had also used during the 1920s for security purposes) and worked sporadically. Hitler appears to have had a low opinion of her intelligence, referring to both Paula and his other sister Angela as “stupid geese”.

She later claimed to have seen her brother about once a year during the 1930s and early 1940s. She worked as a secretary in a military hospital for much of World War II, but eventually gave the job up because she found the work too difficult (It is unknown if was for medical reasons or not).

She took the name Wolf (or Wolff) at her brother’s insistence and it is interesting to note the Adolf himself used the name Wolf to denote his various headquarters throughout the war years: The Wolf’s Gorge and Wolf’s Lair.

Paula never married, or had children and died of natural caused on the 1st of June 1960 and was buried in the Bergfriedhof in Berchtesgaden under the name of Paula Hitler.

There is some evidence Paula shared her brother’s strong German nationalist beliefs, but she was not politically active and never joined the Nazi Party. During the closing days of the war, at the age of 49, she was driven to Berchtesgaden, Germany, apparently on the orders of Martin Bormann.

She was arrested by US intelligence officers in May 1945 and debriefed later that year. A transcript shows one of the agents remarking she bore a physical resemblance to her brother. She told them that the Soviets had confiscated her house in Austria, that the Americans had expropriated her Vienna apartment, and that she was taking English lessons.

She characterized her childhood relationship with her brother as one of both constant bickering and strong affection.

Paula later told about Adolf and their childhood during her interrogations after the war:

“My brother was very good in some subjects, and very weak in others. He was the weakest in mathematics and, as far as I can remember, in physics, also. His failures in mathematics worried my mother. He loved music. He preferred Wagner even then. Wagner was always his favorite.”

Paula said that she could not bring herself to believe that her brother had been responsible for the Holocaust. She had also told them that she had met Eva Braun only once. 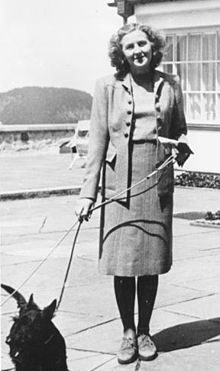 Paula was released from American custody and returned to Vienna, where she lived on her savings for a time, then worked in an arts and crafts shop. In 1952, she moved to Berchtesgaden in Germany, reportedly living “in seclusion” in a two-room flat as Paula Wolff. During this time, she was looked after by former members of the SS and survivors of her brother’s inner circle.

In February 1959, she agreed to be interviewed by Peter Morley, a documentary producer for British television station Associated-Rediffusion. The resulting conversation was the only filmed interview she ever gave and was broadcast as part of a programme called Tyranny: The Years of Adolf Hitler. She talked mostly about Hitler’s childhood and refused to be drawn on political questions. Footage from this and a contemporary interview with Peter Morley was included in the 2005 television documentary The Hitler Family (original German title Familie Hitler. Im Schatten des Diktators), directed by Oliver Halmburger and Thomas Staehler.

In a statement  in 1957 she said the following about her brother.

“Sir – do not forget one thing! Your name will be long disintegrated with your corpse – forget and decayed – while the name Adolf Hitler will still shine and blaze! You cannot kill him with your liquid manure tubs, neither strangle him with your ink-daubed, greasy fingers – you can not extinguish his name from hundred thousand souls – to that you are very small and too small!

And what did you give up to now? And who of you wanted to give his life for Germany? You have had before your eyes always only the power and the wealth, the pleasure, the food and the gluttony – a marvellous life without responsibility – if you have thought of Germany!

Count on it, sir – alone the pure, unselfish thinking and action of the leader is enough for the immortality!

The fact that his fanatical struggle for Germany was not successful, as for example Cromwells struggle once in Britain – also this maybe lies in the mentality, because the Briton does not forget with all slope to the vanity, to envy and to the recklessness – still to be an Englishman, and the loyalty to his crown lies to him in the blood – while the German is everything, only not primarily German in his desire for being successful. Thus you small souls do not care, if the whole nation goes to ruins. Your leading idea is not: Common good goes before self-interest, but always only vice versa! And with this idea you want to prevent the immortality of a greater man?

What I wrote down in the first postwar years, is still valid in 1957 and confirms the correctness of my conviction “

Paula died on 1 June 1960, at the age of 64,the last surviving member of Hitler’s immediate family. She was buried in the Bergfriedhof in Berchtesgaden/Schönau under the name Paula Hitler. In June 2005, the wooden grave marker and remains were reportedly removed and replaced with another burial, a common practice in German cemeteries after two or more decades have elapsed. In May 2006, however, it was reported the grave marker had been returned to Paula’s grave and a second marker had been added, indicating another more recent burial in the same spot.