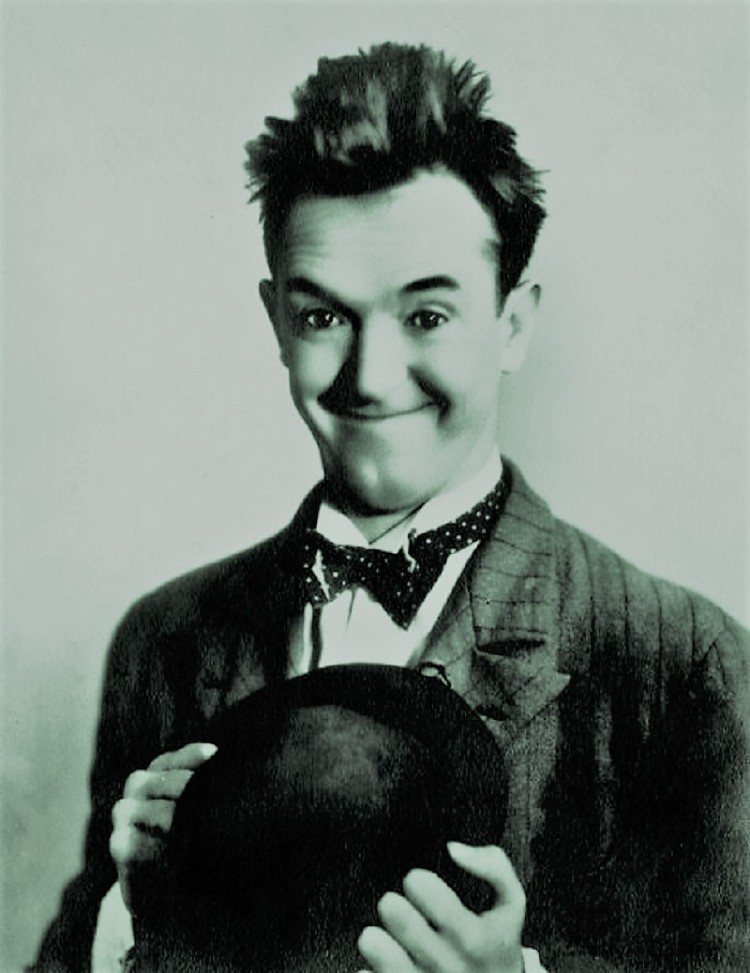 There are very few people who can make you laugh just by looking at their face, but such was the genius of Stan Laurel, his expressions were enough to get you in a burst of laughter.

Of course there was much more to his comic genius than just his face. One of my all time favourite quotes comes from the Laurel & Hardy movie Brats. ” You can lead a horse to water, but a pencil must be lead”

so much has already been written about Stan Laurel, that’s why I am fouussing on his last few moments on this earthly soil.

He also had said ” If anyone cries at my funeral, I will never speak to them again” Until his last breath he remained a funny man.

Dear Stan Laurel on this your 55th anniversary, I salute you and thank you for the many laughs you have given me, and indeed still do.

This is footage taken at his funeral. 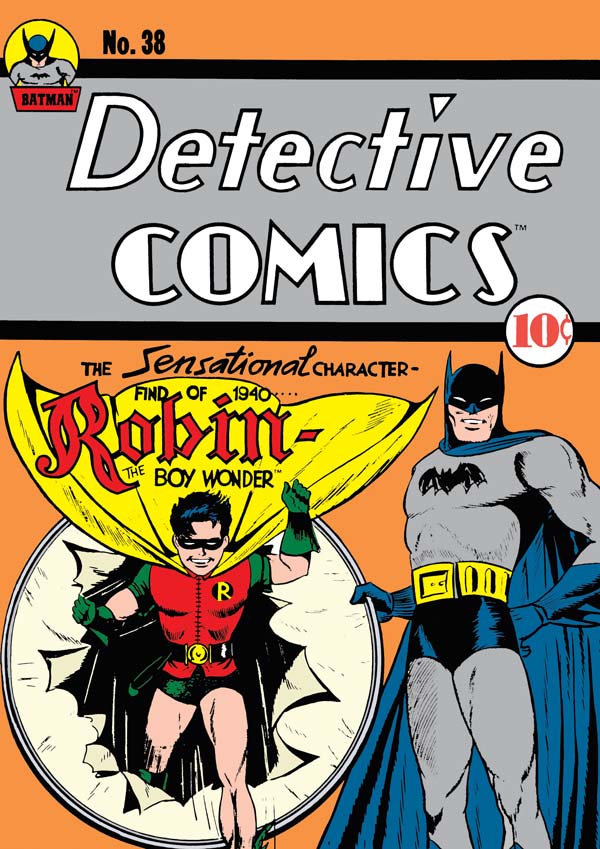 On March 6 1940 WWII had not yet gone global, a lot of countries had not been affected by the war. Although the anxiety of an impending war was prevalent it was still a matter of “business as usual”  in a majority of nations.

Although Robin was introduced on March 6 1940, the comic was only published in April 1940. 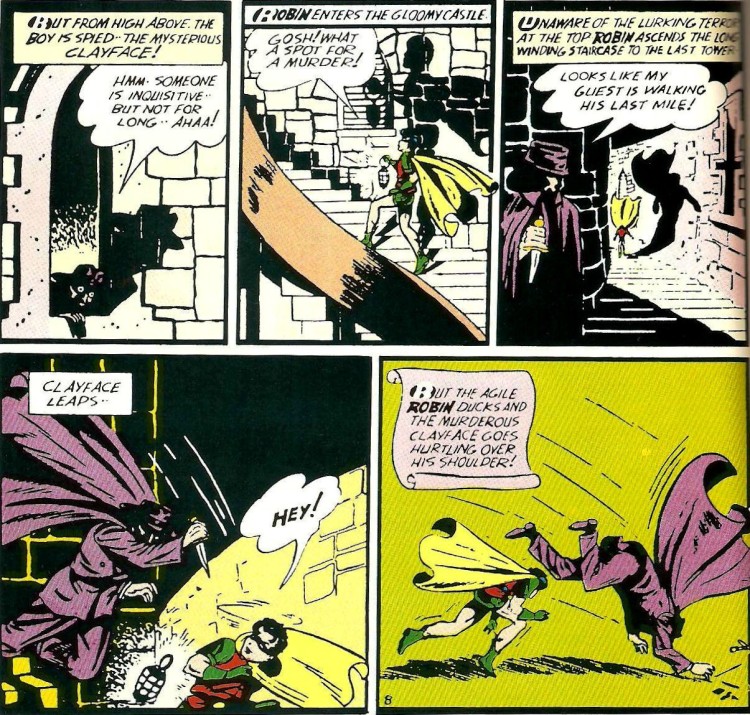 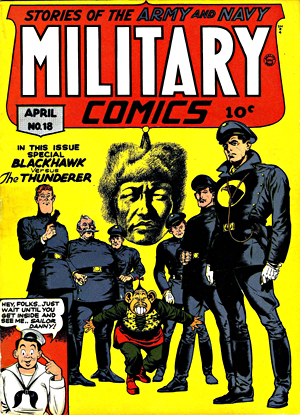 I am not a great fan of comics although I did read them when I was younger, but they don’t really interest me that much anymore.

However I can see the value of them and why they were popular even during war. Or maybe I should say especially during war, Because it was the perfect tool for escapism. It was cheap and more important easy to carry with you. Of course a lot of the comics would be oozing with propaganda.

Cartoons have often been use in a satirical way and have caused many controversies, as a matter of fact they still do. But the propaganda value of this was priceless

Below are just a few examples of WWII Comic books and cartoons.

Uncle Sam is a fictional character appearing in American comic books published by DC Comics. Based on the national personification of the United States, Uncle Sam, the character first appeared in National Comics #1 (July, 1940) and was created by Will Eisner 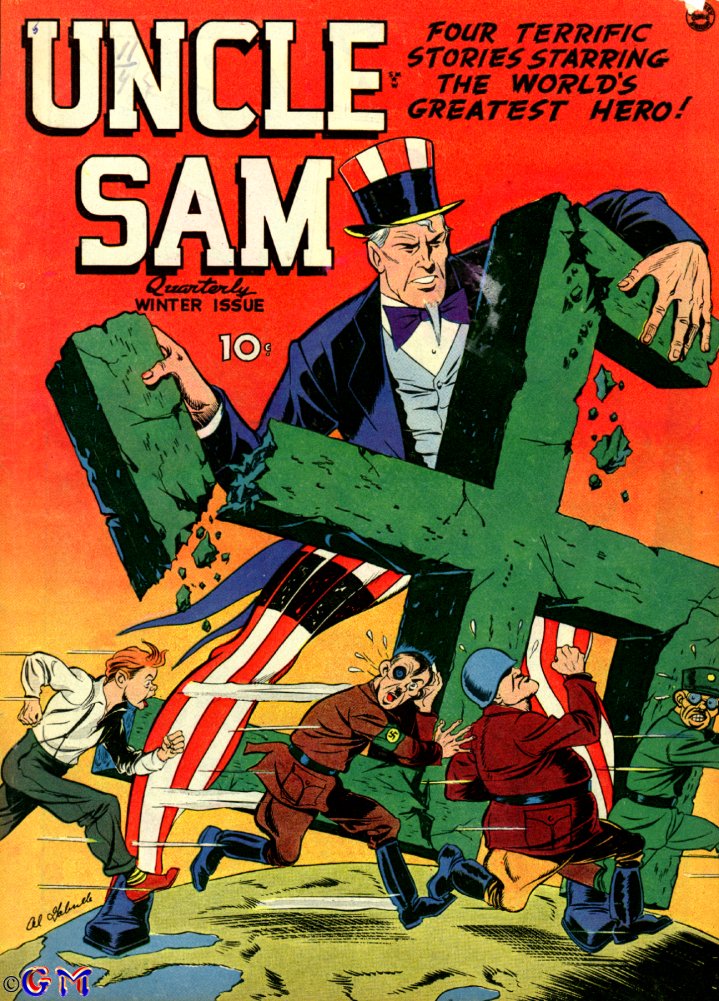 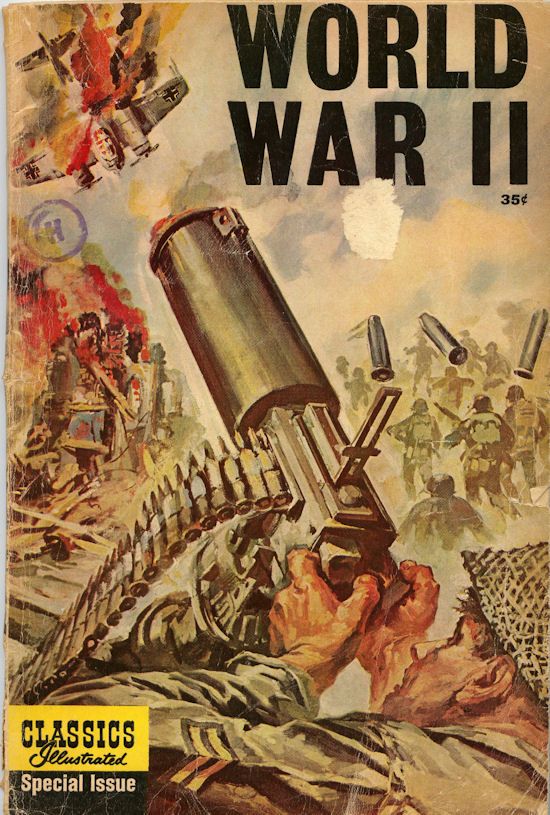 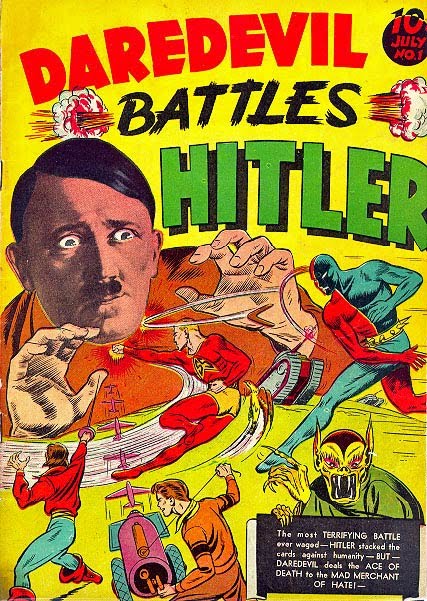 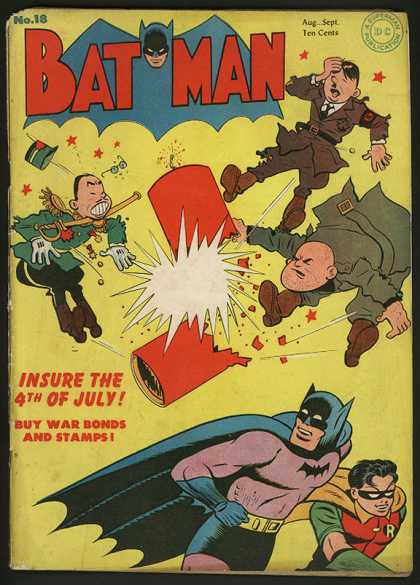 William Henry “Bill” Mauldin (October 29, 1921 – January 22, 2003) was an American editorial cartoonist who won two Pulitzer Prizes for his work. He was most famous for his World War II cartoons depicting American soldiers, as represented by the archetypal characters Willie and Joe, two weary and bedraggled infantry troopers who stoically endure the difficulties and dangers of duty in the field. His cartoons were popular with soldiers throughout Europe, and with civilians in the United States as well.

One of the most iconic “Willy and Joe” cartoons of WWII, drawn by Bill Maudlin 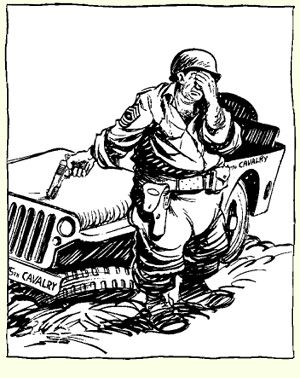 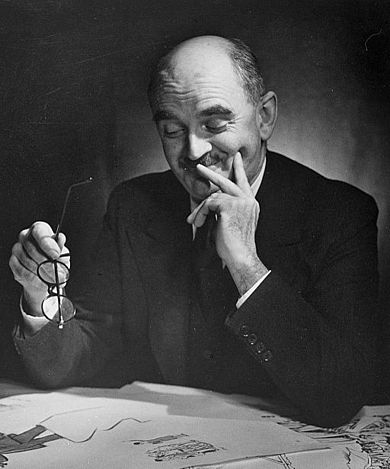 Sir David Alexander Cecil Low (7 April 1891 – 19 September 1963) was a New Zealand political cartoonist and caricaturist who lived and worked in the United Kingdom for many years. Low was a self-taught cartoonist. Born in New Zealand, he worked in his native country before migrating to Sydney in 1911, and ultimately to London (1919), where he made his career and earned fame for his Colonel Blimp depictions and his merciless satirising of the personalities and policies of German dictator Adolf Hitler, Italian dictator Benito Mussolini, Soviet dictator Joseph Stalin, and other leaders of his times. 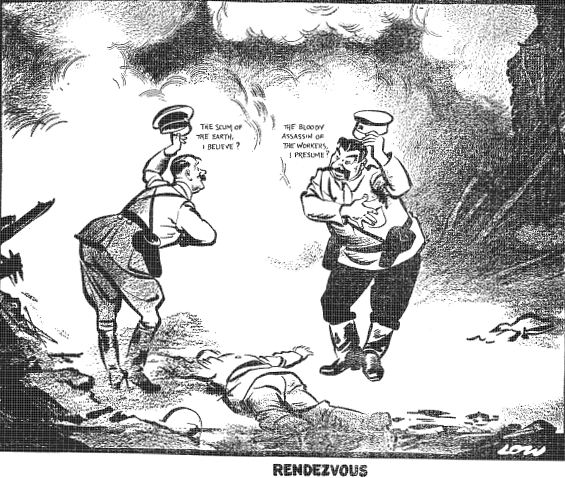 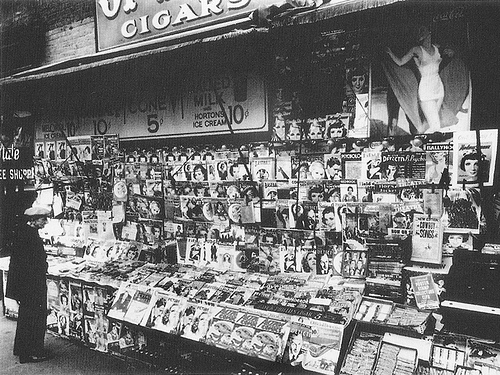 I am actually not a great fan of Comic books or Graphic Novels as they are called now, although I did read them as a kid but was never really fascinated by them.

But in a time when you are not sure if there will be a tomorrow it is important to have something to cling to, albeit fictional and especially youngsters.

WWII was for most people a time of great uncertainty and it was important for many young men and women to be able to escape the daily realities every now and them.Comic books were a great tools to do just that. To dream away and to hope that all would be great again.

And of course the propaganda value was pricesless. 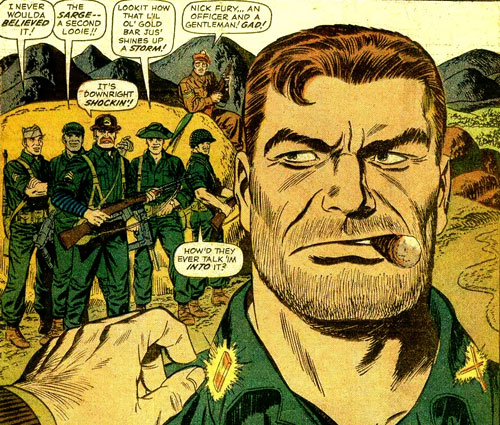 Before the one-eyed cigar chomper became the director of S.H.I.E.L.D.(played ny Samuel L. Jackson), Nick Fury was waist deep in the trenches of World War II. Fighting alongside Captain America, Bucky, and the Howling Commandos, Sgt. Fury played an instrumental part in defeating the Nazis and their fictional brethren, HYDRA. It was in the war where Fury discovered his leadership skills and the true definition of a selfless hero. With the tools and experiences he gained abroad, Fury acquired the smarts needed to become the Marvel Universe’s top super sleuth. 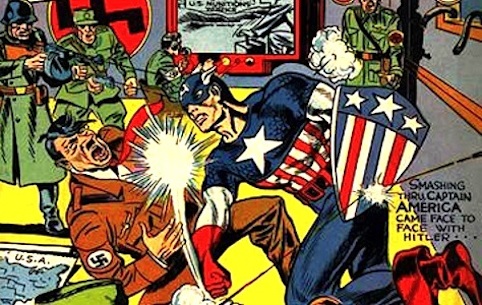 The cover to Captain America Comics #1 says it all. When America needed a hero to confront the Nazi regime even before World War II began, creators Joe Simon and Jack Kirby gave the nation one of its boldest icons. As Captain America, Sgt. Steve Rogers saved the world time and time again from the tyranny of the Third Reich. But even after the war ended, Captain America did not. When the Avengers resuscitated Cap from suspended animation decades later, Rogers continued to fight for the morals and ideals that founded this nation. Sporting the country’s colors proudly across his uniform, Captain America is the true comic book embodiment American patriotism. 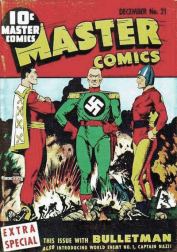 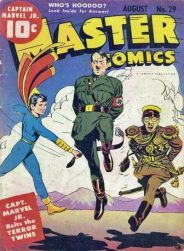 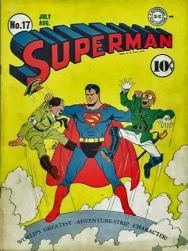 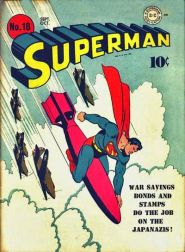 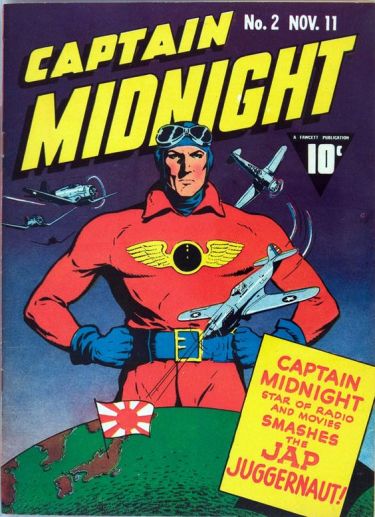 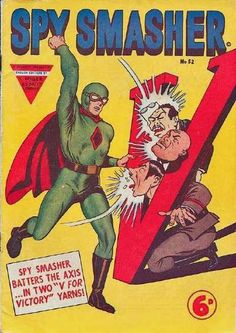 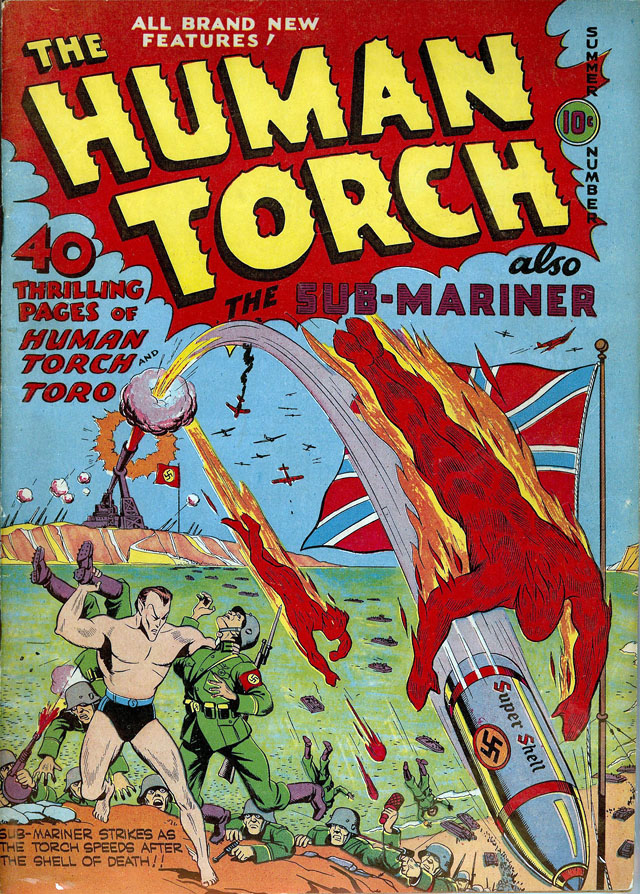 In modern times, comic book superheroes tend to view armed conflict with a healthy dose of skepticism regardless of which side they’re on. But that wasn’t the case during World War II, when costumed do-gooders from Superman all the way down to the lowliest nobody of a crime fighter eagerly signed up to wallop the Axis powers on behalf of Uncle Sam. And hey, if they had to break the law and do a few political incorcect things to get the job done, who were we to question that? 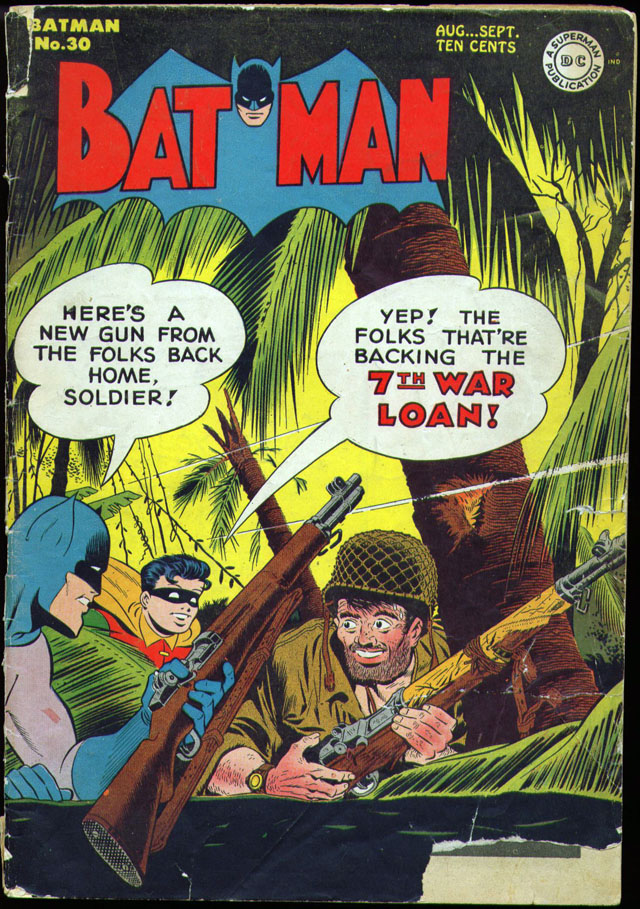 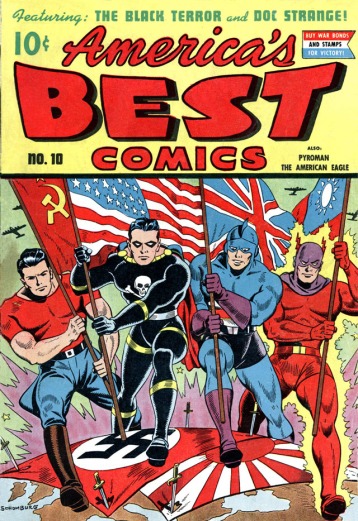 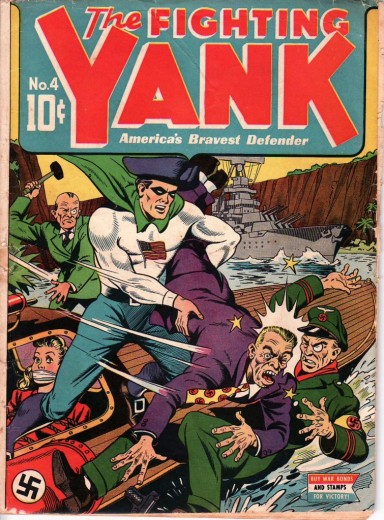 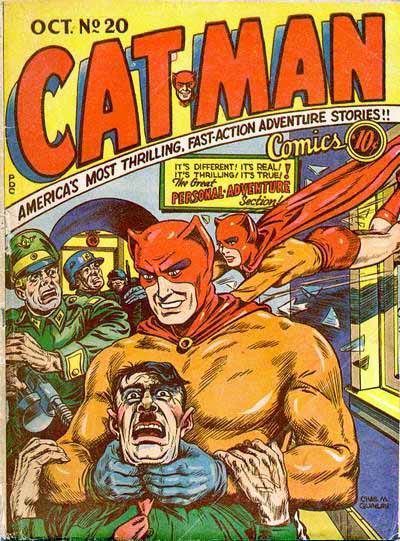