I have to be honest, the title is a small bit deceiving. This blog not about his nephew, the famous Rockstar who celebrates his 58th birthday today, but it is about Leonard M. Kravitz (technically Lenny is short for Leonard).

Leonard Martin Kravitz was an American soldier in the United States Army who served in the Korean War. He is a posthumous recipient of the Medal of Honor.

Leonard Kravitz ,of Russian Jewish ancestry , was born and raised in Brooklyn, New York. His parents were Jean (Kaufman) and Joseph Kravitz. He was the younger brother of filmmaker and TV producer Sy Kravitz and uncle of musician Lenny Kravitz.

Kravitz is being recognized for his actions in Yangpyong, Korea, March 6-7, 1951. While occupying defensive positions, Kravitz’s unit was overrun by enemy combatants and forced to withdraw. Kravitz voluntarily remained at a machine-gun position to provide suppressive fire for the retreating troops. This forced the enemy to concentrate their attack on his own position. Kravitz ultimately did not survive the attack, but his actions saved his entire platoon.

His niece Laurie Wegner was presented the Medal of Honor by President Barack Obama in the White House on March 18, 2014.

“Medal of Honor Citation
For conspicuous gallantry and intrepidity at the risk of his life above and beyond the call of duty:

Private First Class Leonard M. Kravitz distinguished himself by acts of gallantry and intrepidity above and beyond the call of duty while serving as an assistant machinegunner with Company M, 5th Infantry Regiment, 24th Infantry Division during combat operations against an armed enemy in Yangpyong, Korea on March 6 and 7, 1951. After friendly elements had repulsed two probing attacks, the enemy launched a fanatical banzai charge with heavy supporting fire and, despite staggering losses, pressed the assault with ruthless determination. When the machinegunner was wounded in the initial phase of the action, Private First Class Kravitz immediately seized the weapon and poured devastating fire into the ranks of the onrushing assailants. The enemy effected and exploited a breach on the left flank, rendering the friendly positions untenable. Upon order to withdraw, Private First Class Kravitz voluntarily remained to provide protective fire for the retiring elements. Detecting enemy troops moving toward friendly positions, Private First Class Kravitz swept the hostile soldiers with deadly, accurate fire, killing the entire group. His destructive retaliation caused the enemy to concentrate vicious fire on his position and enabled the friendly elements to withdraw. Later, after friendly troops had returned, Private First Class Kravitz was found dead behind the gun he had so heroically manned, surrounded by numerous enemy dead. Private First Class Kravitz’s extraordinary heroism and selflessness at the cost of his own life, above and beyond the call of duty, are in keeping with the highest traditions of military service and reflect great credit upon himself, his unit and the United States Army.”

Ending the blog with one of his nephews songs, with a message which is more needed now then it ever was.

She looked amazing on her baggy army uniform. Ted Sherman, who served in the Navy during World War II and Korea, recalled: “I was with a group of Navy guys who happened to be at Daegu Air Force Base when we heard Marilyn would entertain there that night. We convinced our transport pilot to find something wrong with our R4D transport, so we could delay the return flight to our ship in Tokyo Bay for that one night. It was a great evening for all the homesick guys who were dazzled by the movie star’s performance. The sight and sounds of Marilyn singing ‘Diamonds Are a Girl’s Best Friend’ is a memory I still cherish”.

Monroe flew to Korea during her honeymoon in Japan with husband Joe DiMaggio.

The baseball star was said to be annoyed by the fact that more fans turned out to see Marilyn in Japan than to see him and he refused to join her in Korea. Even at this early stage in their marriage the cracks were starting to show and they divorced later that year. 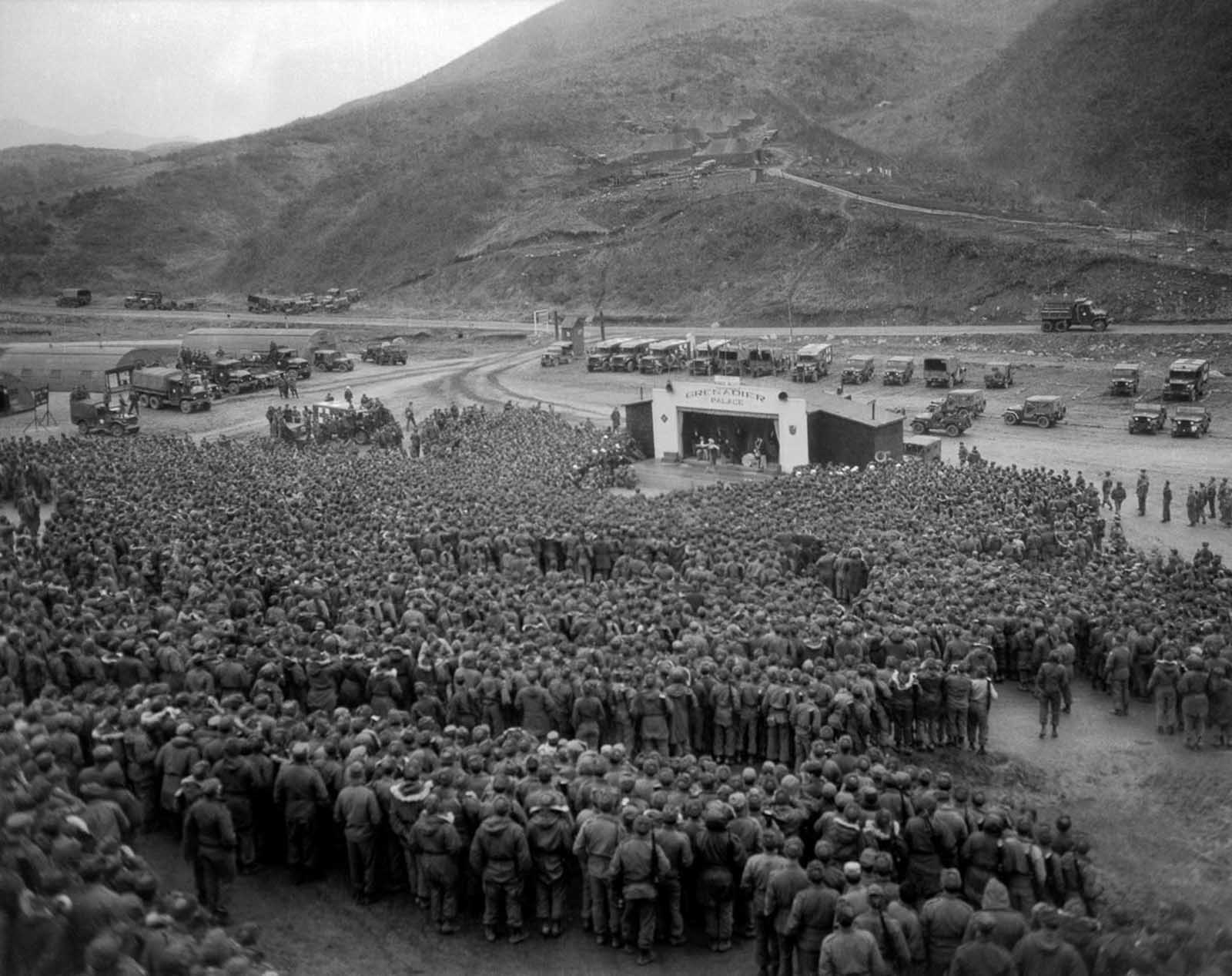 The 1936 Berlin Olympic games was more then a sporting event, it was more a propaganda tool for the Nazi regime, but it was also an important propaganda event of Germany’s future Axis partner,Japan.

As the 4 gold medals won by Jesse Owens were an embarrassment for Hitler and his pals,

so was the The men’s marathon event .The final was won by Son Kitei.However Son Kitei was not his real name, his real name was Sohn Kee Chung a Korean athlete.

Sohn Kee-chung ( August 29, 1912– November 15, 2002) became the first medal-winning Korean Olympian, when he won the gold medal in the marathon at the 1936 Berlin Olympics as a member of theJapanese delegation

He competed under the Japanese Son Kitei, as Korea was part of the Japanese Empire at the time.The name is based on the Japanese kanji pronunciation of his Korean hanja name, both are written the same

During the time of the competition, Korea was a colony of Japan, therefore Korean sportsmen competed as members of Japanese team and were using their Japanese names.

Sohn, who was competing for the Empire of Japan, won the gold medal in the marathon. He ran the 42.195 kilometres (26.219 mi) course in 2h29:19.2, breaking the Olympic record. His Korean teammate Nam Sung-yong took the bronze medal. As Korea was part of Japan at the time, the International Olympic Committee (IOC) officially credited Japan with Sohn’s gold and Nam’s bronze in the 1936 Summer Olympics medal count.

On December 9, 2011, the IOC recognized Sohn’s Korean nationality by fixing his official profile. It cited his efforts to sign his Korean name and stressing Korea’s status as a separate nation during interviews. The move was part of the Korean Olympic Committee’s repeated requests to acknowledge Sohn’s background. However, the IOC ruled out changing the nationality and registered name per official records to prevent historical distortions. 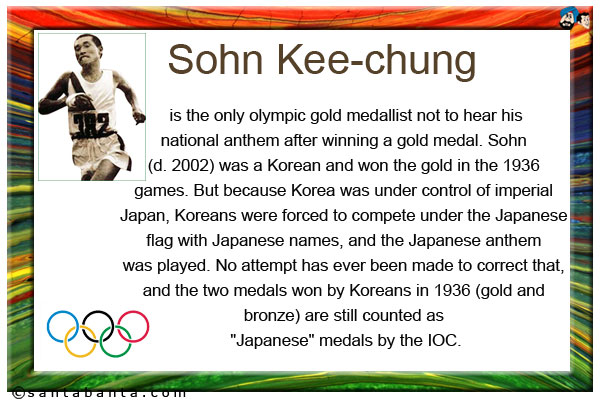 Under orders from Tokyo, Sohn Kee-chung had to compete using the Latin alphabet name of Son Kitei. It is the romanization of Japanese pronunciation of 孫基禎, his Korean name in hanja.

Sohn refused to acknowledge the Japanese anthem while it was played at his award ceremony and later told reporters that he was ashamed to run for Japan.When the Dong-a Ilbo(is a newspaper in Korea since 1920 with daily circulation of more than 1.2 million and opinion leaders as its main readers.) published a photograph of Sohn at the medal ceremony, it altered the image to remove the Japanese flag from his running tunic. The act enraged the Japanese Governor-General of Korea Minami Jiro in Seoul. The Kempetai military police imprisoned eight people connected with the newspaper and suspended its publication for nine months.

After the race he tried to tell the newspapermen again and again that he was Korean, not Japanese, but his minders refused to translate his remarks.

For winning the marathon, Sohn was to have received an ancient Corinthian helmet (circa BCE 800–700), which was discovered at Olympia, Greece, and later purchased by a newspaper in Athens for giving it as an Olympic award. However, the IOC believed that presenting such a valuable gift would violate its amateur rules. Thus the helmet was placed in a Berlin museum where it remained for fifty years. It was finally presented to Sohn in 1986.On March 7, 1987, the helmet was categorised as the 904th treasure of South Korea. There was initial plan that awarding replicas of this helmet to the winners of the 2006 Sohn Kee-chung marathon, but winners got only chance to wear that replica. 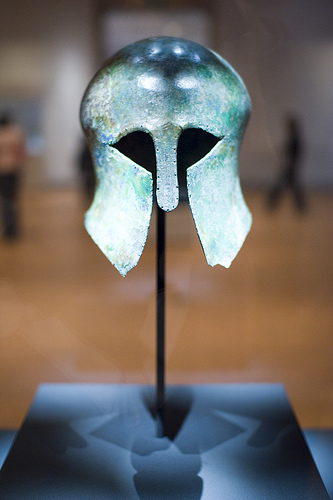 Sohn spent the remainder of his career in South Korea coaching other notable runners such as Suh Yun-Bok, the winner of the Boston Marathon in 1947; Ham Kee-Yong, winner of the Boston Marathon in 1950; and Hwang Young-Cho, who was the gold medalist of the 1992 Summer Olympics marathon, and whom Sohn Kee-chung especially went to Barcelona to see. Sohn also became the Chairman of the Korean Sporting Association. At the 1988 Summer Olympics in Seoul, he was given the honor of carrying the Olympic torch into the stadium at the opening ceremony.

He authored an autobiography entitled My Motherland and Marathon (나의조국과 마라톤).

He was honoured with the Korean Order of Civil Merit