On the night of August 8, 1969, Charles “Tex” Watson, Susan Atkins, Patricia Krenwinkel, and Linda Kasabian were sent by Charlie to the old home of Terry Melcher at 10050 Cielo Drive. Their instructions were to kill everyone at the house and make it appear like Hinman’s murder, with words and symbols written in blood on the walls.

As Charlie Manson had said earlier in the day after choosing the group, “Now is the time for Helter Skelter.” 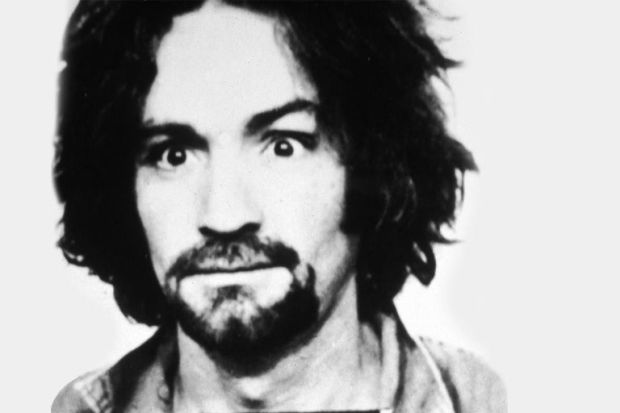 What the group did not know was that Terry Melcher was no longer residing in the home and that it was being rented by film director Roman Polanski and his wife, actress Sharon Tate. Tate was two weeks away from giving birth and Polanski was delayed in London while  working on his film, The Day of the Dolphin. Because Sharon was so close to giving birth, the couple arranged for friends to stay with her until Polanski could get home.

After dining together at the El Coyote restaurant, Sharon Tate,  celebrity hair stylist Jay Sebring, Folger coffee heiress Abigail Folger and her lover Wojciech Frykowski, returned to the Polanski’s home on Cleo Drive at around 10:30 p.m. Wojciech fell asleep on the living room couch, Abigail Folger went to her bedroom to read, and Sharon Tate and Sebring were in Sharon’s bedroom talking.

Just after midnight, Watson, Atkins, Krenwinkel, and Kasabian arrived at the house. Watson climbed a telephone pole and cut the phone line going to the Polanski’s house. Just as the group entered the estate grounds, they saw a car approaching. Inside the car was 18-year-old Steve Parent who had been visiting the property’s caretaker, William Garreston.

As Parent approached the driveway’s electronic gate, he rolled down the window to reach out and push the gate’s button, and Watson descended on him, yelling at him to halt. Seeing that Watson was armed with a revolver and knife, Parent began to plead for his life. Unfazed, Watson slashed at Parent, then shot him four times, killing him instantly.

After murdering Parent, the group headed for the house. Watson told Kasabian to be on the lookout by the front gate. The other three family members entered the Polanski home. Charles “Tex” Watson went to the living room and confronted Frykowski who was asleep. Not fully awake, Frykowski asked what time it was and Watson kicked him in the head. When Frykowski asked who he was, Watson answered, “I’m the devil and I’m here to do the devil’s business.”

Susan Atkins went to Sharon Tate’s bedroom with a buck knife and ordered Tate and Sebring to go into the living room. She then went and got Abigail Folger. The four victims were told to sit on the floor. Watson tied a rope around Sebring’s neck, flung it over a ceiling beam, then tied the other side around Sharon’s neck. Watson then ordered them to lie on their stomachs. When Sebring voiced his concerns that Sharon was too pregnant to lay on her stomach, Watson shot him and then kicked him while he died.

Knowing now that the intent of the intruders was murder, the three remaining victims began to struggle for survival. Patricia Krenwinkel attacked Abigail Folger and after being stabbed multiple times, Folger broke free and attempted to run from the house. Krenwinkel followed close behind and managed to tackle Folger out on the lawn and stabbed her repeatedly.

Inside, Frykowski struggled with Susan Atkins when she attempted to tie his hands. Atkins stabbed him four times in the leg, then Watson came over and beat Frykowski over the head with his revolver. Frykowski somehow managed to escape out onto the lawn and began screaming for help.

While the microbe scene was going on inside the house, all Kasabian could hear was screaming. She ran to the house just as Frykowski was escaping out the front door.

According to Kasabian, she looked into the eyes of the mutilated man and horrified at what she saw, she told him that she was sorry. Minutes later, Frykowski was dead on the front lawn.Watson shot him twice, then stabbed him to death.

Seeing that Krenwinkel was struggling with Folger, Watson went over and the two continued to stab Abigail mercilessly. According to killer’s statements later given to the authorities, Abigail begged them to stop stabbing her saying, “I give up, you’ve got me”, and “I’m already dead”.

The final victim at 10050 Cielo Drive was Sharon Tate. Knowing that her friends were likely dead, Sharon begged for the life of her baby. Unmoved, Atkins held Sharon Tate down while Watson stabbed her multiple times, killing her. Atkins then used Sharon’s blood to write “Pig” on a wall. Atkins later said that Sharon Tate called out for her mother as she was being murdered and that she tasted her blood and found it “warm and sticky.”

According to the autopsy reports, 102 stab wounds were found on the four victims. 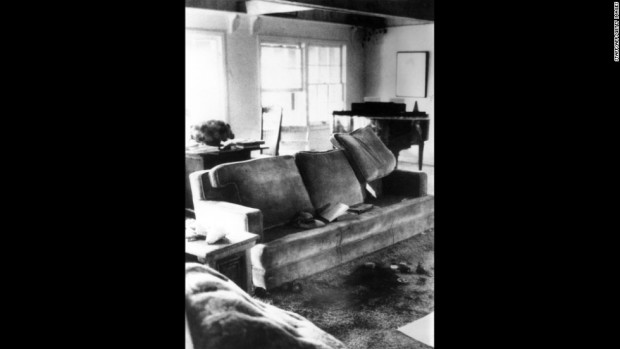 The next day Manson, Tex Watson, Susan Atkins, Patricia Krenwinkel, Steve Grogan, Leslie Van Houten, and Linda Kasabian went to the home of Leno and Rosemary Labianca. Manson and Watson tied up the couple and Manson left. He told Van Houten and Krenwinkel to go in and kill the LaBiancas. The three separated the couple and murdered them, then had dinner and a shower and hitchhiked back to Spahn Ranch. Manson, Atkins, Grogan and Kasabian drove around looking for other people to kill but failed.

Manson targeted people with whom he was directly or indirectly associated. They were all attacked in their residences. The only victim Manson is known to have attacked personally is Bernard Crowe, who was shot, but survived. The other victims were attacked by his followers and were usually viciously stabbed several times. A few were also shot with a .22 Hi Standard “Buntline Special” revolver