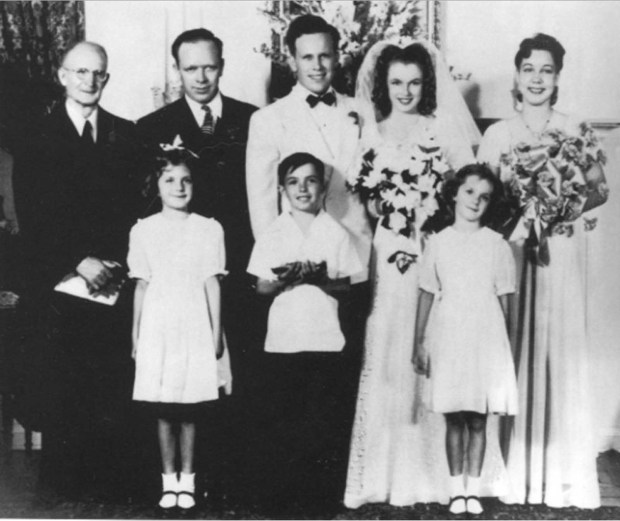 A young couple in love,neighborhood sweethearts getting married. It was just like a fairy tale, what could possibly go wrong.

Well WWII for one, but not in the usual World War 2 drama sense, but  there were more reasons. one being fame.

They began dating in January 1942 and were married in June of that year, just 18 days after she  celebrated her 16th birthday.The she was Norma Jeane Baker.On June 19, 1942, she got married to James Dougherty, a 20 year old Los Angeles police officer .The wedding was officiated by a minister, Norma Jean wore an embroidered lace wedding dress with long sleeves and veil. 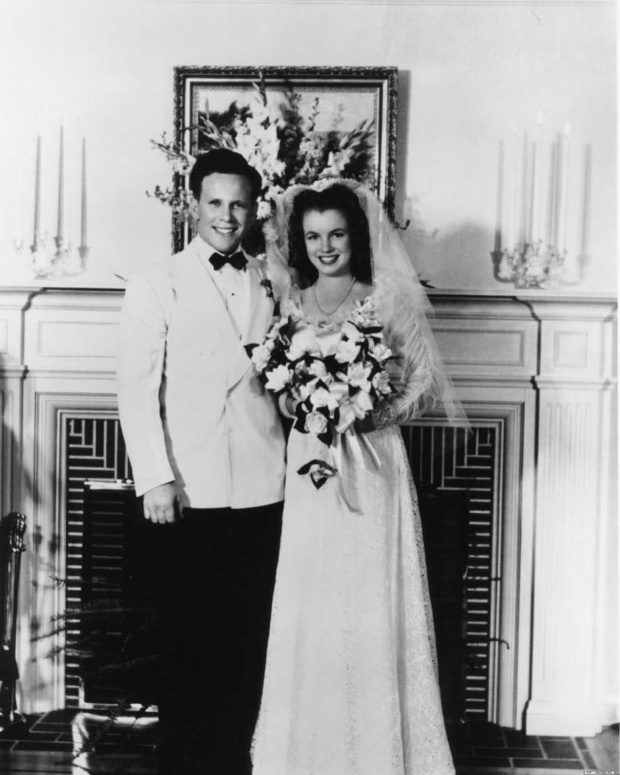 James’ family lived next door to Grace Goddard, a friend of Norma Jean’s mother, Gladys, who was frequently in psychiatric hospitals. After living in a handful of foster homes, Norma Jeane was taken in by Grace and her husband, who wanted to move across the country and couldn’t take her with them. To prevent Norma Jean from having to go back into the foster care system, Grace suggested that James marry the teenager.

Norma Jeane and her Jimmie had a near idyllic first one or two years as a married couple and seemed destined to spend their lives together in marital bliss.

But after Jimmie enlisted in the Merchant Marines in 1943, things were to change. 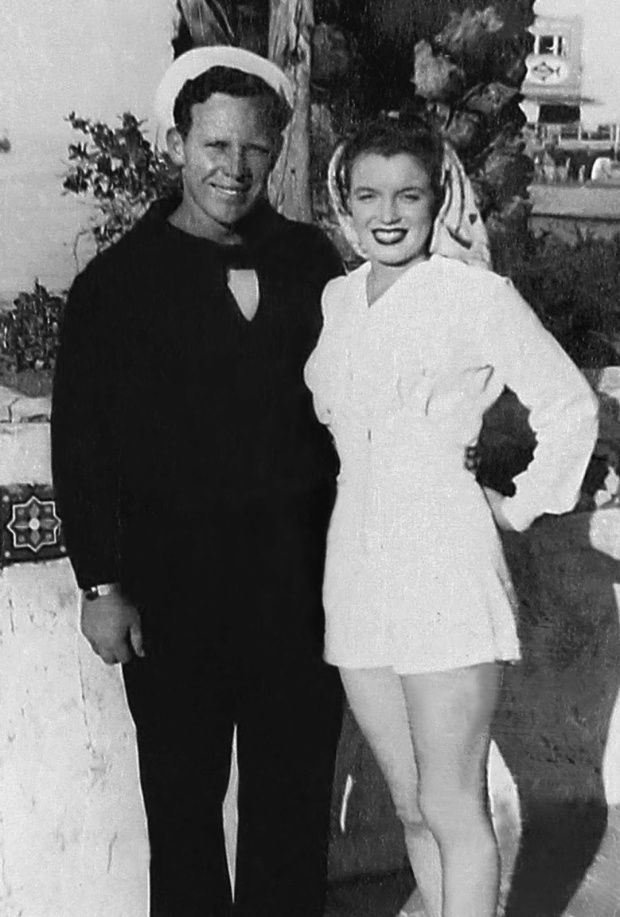 He was soon called up for overseas duty. Norma Jeane would dutifully write her husband letters several times a week, but soon she became bored without him. She got a job at the Radioplane factory, inspecting parachutes and preparing planes for flight. Photos of the pretty brunette taken at work landed her modeling gigs around LA, and it wasn’t long before she caught the fame bug. 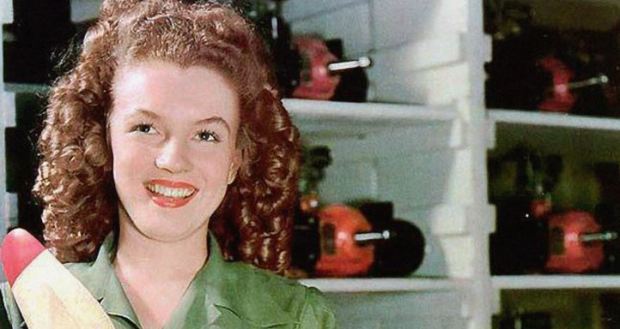 While James was still stationed overseas in September 1946, Norma Jean filed for divorce.“I was on a ship in the Yangtze River getting ready to go into Shanghai when I was served with divorce papers,” James said in a 2002 interview. They divorced in 1946.

Norma Jeane Baker of course went on to become Marilyn Monroe, one of the most iconic figures of the 20th century.

How things could have been for these tow if it hadn’t been for WWII, we will never know. 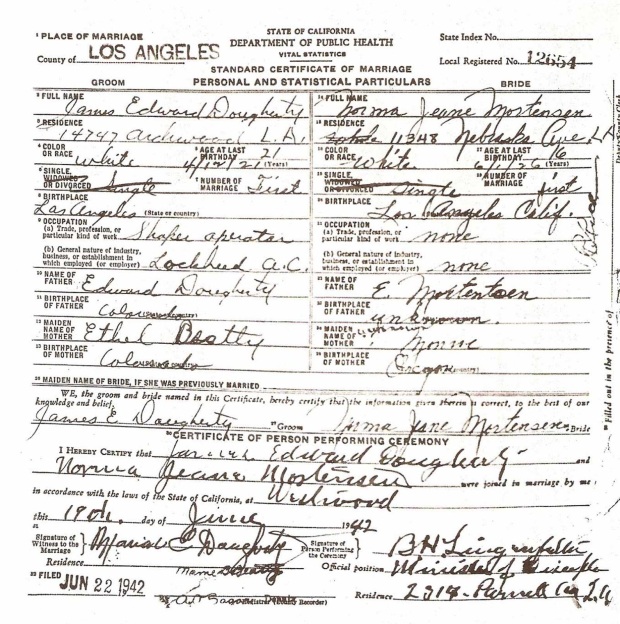 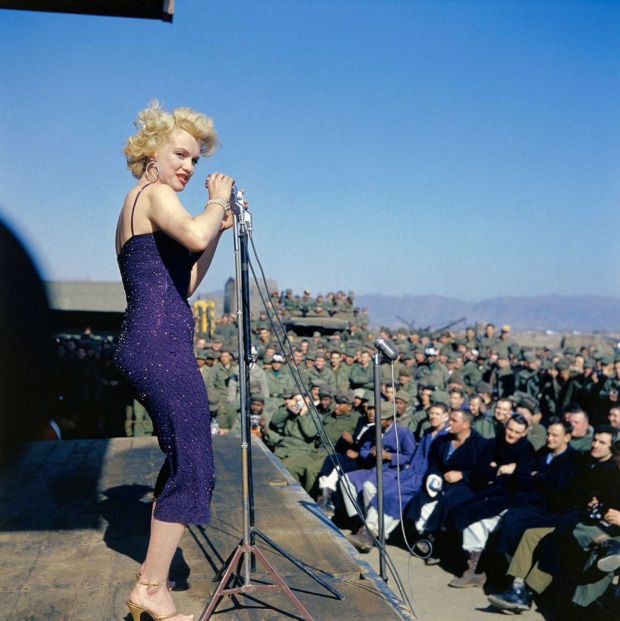 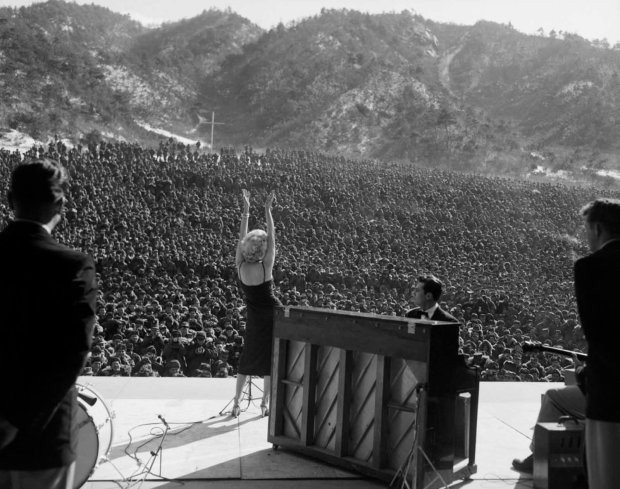 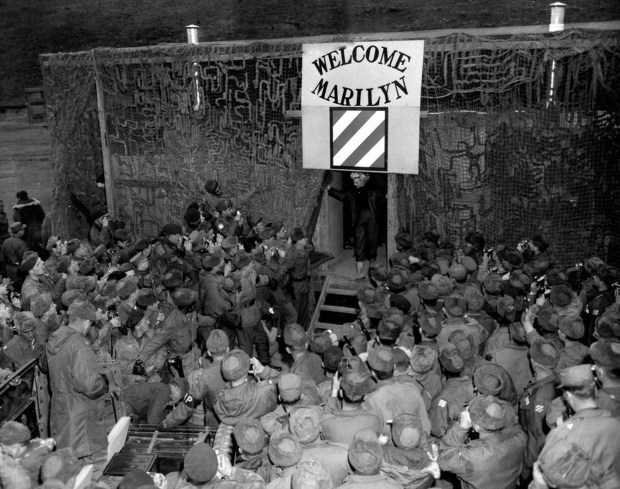 She looked amazing on her baggy army uniform. Ted Sherman, who served in the Navy during World War II and Korea, recalled: “I was with a group of Navy guys who happened to be at Daegu Air Force Base when we heard Marilyn would entertain there that night. We convinced our transport pilot to find something wrong with our R4D transport, so we could delay the return flight to our ship in Tokyo Bay for that one night. It was a great evening for all the homesick guys who were dazzled by the movie star’s performance. The sight and sounds of Marilyn singing ‘Diamonds Are a Girl’s Best Friend’ is a memory I still cherish”. 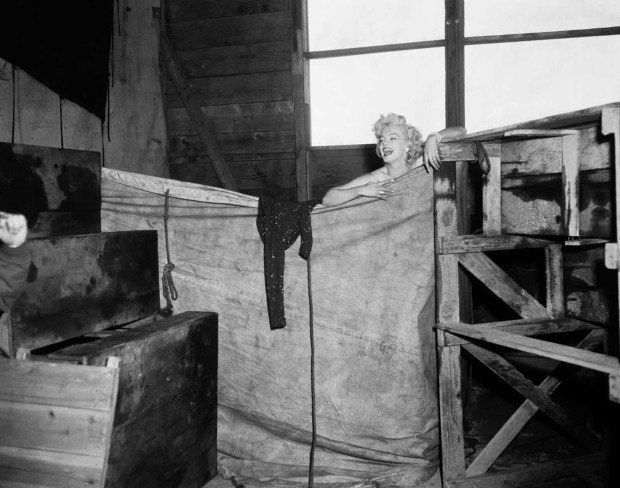 Monroe flew to Korea during her honeymoon in Japan with husband Joe DiMaggio. 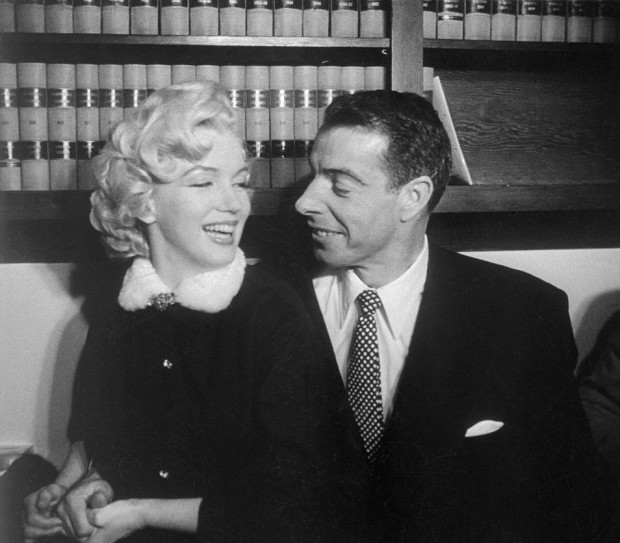 The baseball star was said to be annoyed by the fact that more fans turned out to see Marilyn in Japan than to see him and he refused to join her in Korea. Even at this early stage in their marriage the cracks were starting to show and they divorced later that year.