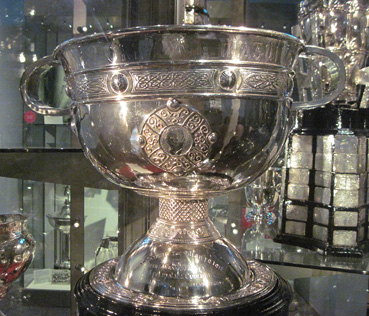 Don’t worry I haven’t  suddenly turned by page into some paranormal or horror blog site. But today was an important day in the Irish sporting agenda. It was the day of the All Ireland GAA senior Gaelic Football final between Mayo and Tyrone .

Mayo did not win the final since 1951,and today was no exception, this is believed to be due to a curse.

The Curse of ’51 allegedly prevents Mayo from winning the Sam Maguire Cup(picture above} ever again, or at least until the death has occurred of every member of the last winning team from 1951. 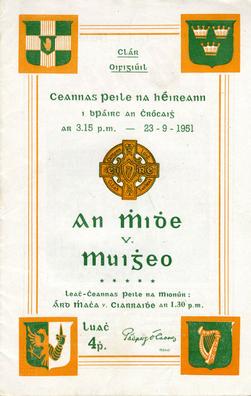 It remains unbroken—despite the team reaching the final on several  occasions since then, they have either completely collapsed on the day or been undone by a series of other unfortunate events.

The legend tells us that while the boisterous Mayo team were passing through Foxford on the victorious journey home, the team failed to wait quietly for a funeral cortège to pass by on its way to the graveyard. The presiding priest consequently put a curse on Mayo football to never win a subsequent All-Ireland Final until all members of the 1951 team are dead.

In 1989, Mayo reached their first All-Ireland Senior Football Championship Final since their last victory in 1951 only to lose to Cork. In 1996, a freak point by Meath at the end of the final forced a replay, which saw Mayo concede another late score that would deny them victory. Kerry bridged an 11-year title gap against them in 1997 with a three-point win, before torturing them by eight points in 2004 and thirteen points in 2006

Mayo returned to the All-Ireland Senior Football Championship Final in 2012. Even with Taoiseach Enda Kenny in Rome seeking divine intervention through Pope Benedict XVI the day before, 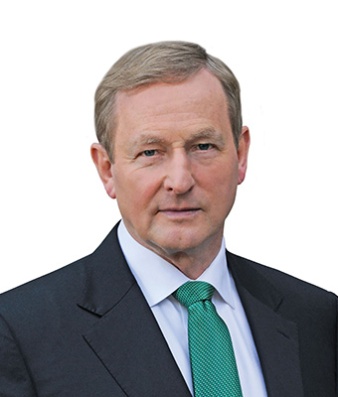 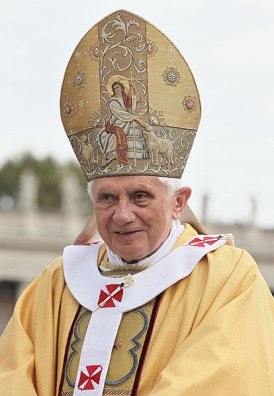 the “Kafkaesque black farce” continued from where it had left off—with Donegal allowed bridge a 20-year gap between titles, helped in no small part by a nightmare opening quarter for Mayo as Michael Murphy—whose father is from Mayo—launched a rocket of a shot into the goal after three minutes. Then, in the eleventh minute, Colm McFadden seized the ball from the grasp of Kevin Keane and slid it into the net for a second Donegal goal. Mayo only got on the score sheet after sixteen minutes and never led at any point during the match. They eventually lost with thirteen points to Donegal’s two goals and eleven.

They lost again in 2013, this time by a single point to Dublin.

They qualified for the 2016 Final on 18 September 2016 where they faced Dublin the curse seemingly struck again when they scored two own goals in the opening half before drawing with Dublin in the last few minutes of the game. They faced Dublin again in a rematch on the 1st October 2016 but lost by a point. The last time they me Dublin in the finals was less then a year ago. On December 19,2020 Dublin beat Mayo by 6 points. 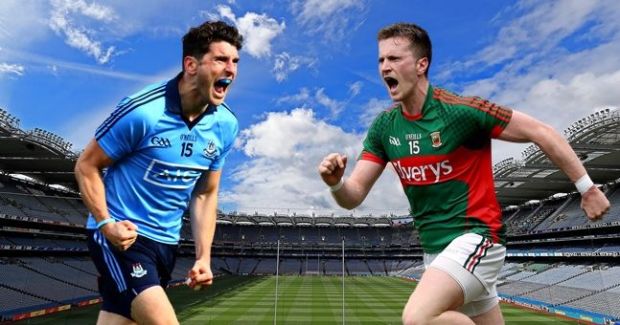 There is only one player still alive of that cursed 1951 team.

Today they lost again this time to Tyrone by 5 points. So the curse has not yet been lifted.

Mayo however is not the only team to be cursed, following are a few more examples. 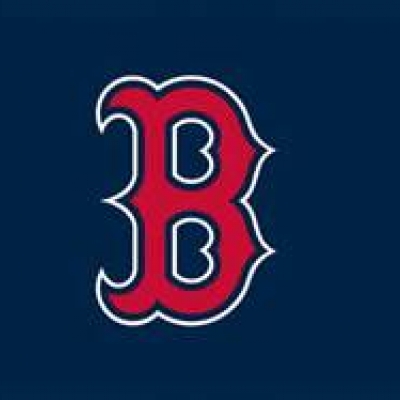 Some allege that there was a curse placed on the Boston Red Sox, who failed to win a World Series after 1918, apparently due to the selling of Babe Ruth to the New York Yankees. 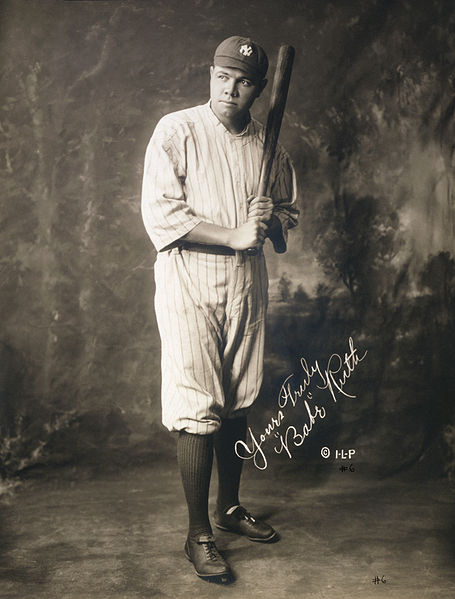 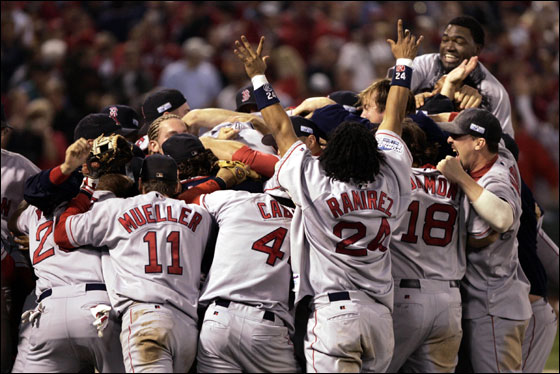 Scottish football side Hibernian endured a 114-year wait to win their third Scottish Cup, eventually doing so against Rangers in the 2016 final. 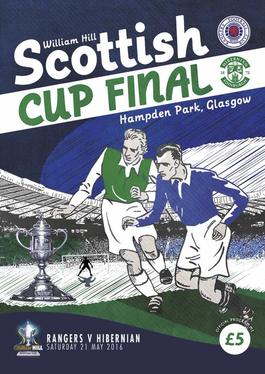 Prior to this success, Hibs had lost an agonising ten straight Scottish Cup finals in a drought stretching back to 1902. Hibernian’s hoodoo was made all the more noteworthy by their relative success in other major Scottish footballing honours – the Leith side won four league titles and three league cups whilst remaining fruitless in their search for Scottish Cup glory. In spite of remaining a prominent force within Scottish football and building notoriously excellent sides such as the Famous Five and Turnbull’s Tornadoes, Hibs were for so long unable to lift the oldest trophy in world football.

Some Hibs fans attributed the absence of Scottish Cup success to a curse which a gypsy woman allegedly placed upon the club during the chairmanship of Harry Swan.Whilst renovation works were being carried out at Hibernian’s Easter Road stadium in the 1950s, a harp crest – which had been displayed on the South Stand symbolising Hibernian’s founding Irish roots – was removed and subsequently did not reappear when work had finished.During the 2015-16 season, Hibs’ modern day badge (which includes the harp) was placed upon the facade of the West Stand at Easter Road.Less than eight months after the harp had been reinstated onto the walls of Easter Road, Hibernian were once again Scottish Cup winners after more than a century in the making.

English football side Birmingham City F.C. played 100 years under an alleged curse from 1906 to 2006.As the legend goes, the club moved from nearby Muntz Street into its current location at St Andrew’s, building the stadium on land that was being used by the Romani people. 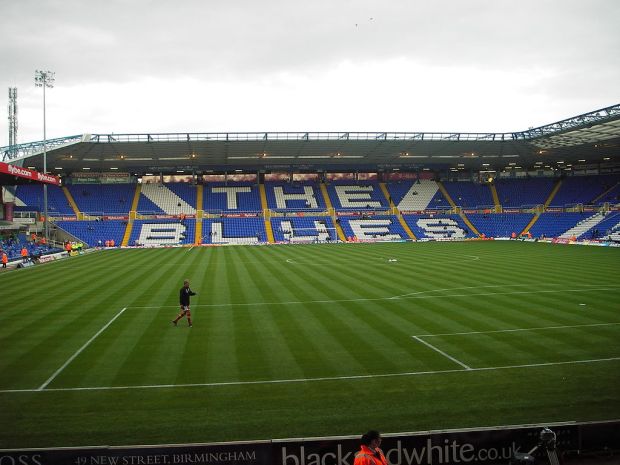 After they were forced to move, the angry Romani people put an 100-year hex on the stadium.

Throughout the years many Birmingham City managers would try to remove the curse but with little success. Former manager Ron Saunders tried to banish the curse in the 1980s by placing crucifixes on floodlights and painting the bottom of his players’ boots red. Another manager, Barry Fry, in charge from 1993 to 1996, urinated in all four corners of the pitch after a clairvoyant said it would break the spell. On Boxing Day 2006 the curse was finally lifted and on that day Birmingham City celebrated a 2–1 win over Queens Park Rangers F.C,and would eventually win a place in the Premiership. Just over four years after the alleged curse ended, Birmingham City finally won the first major final in their history – beating Arsenal 2–1 to win the League Cup at Wembley. 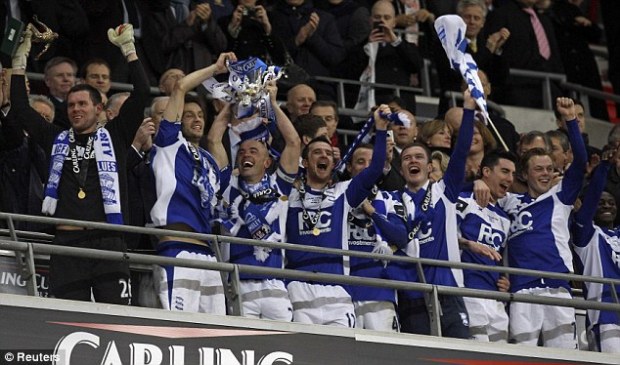