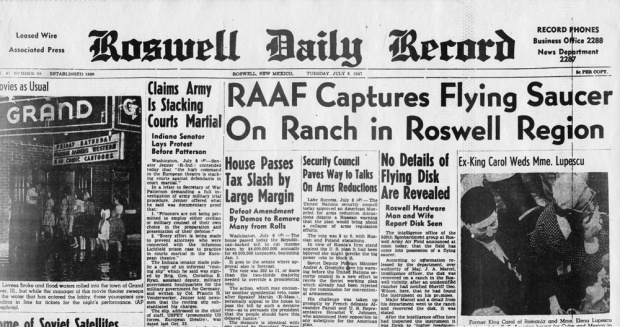 I am not going to say if I believe in extra terrestrial life or not ,however I do think we would be quite arrogant to assume that among all the millions of planets and solar system around us, there is no other life. It doesn’t have to be funny looking green men, but I do believe we will have to keep an open mind on this. 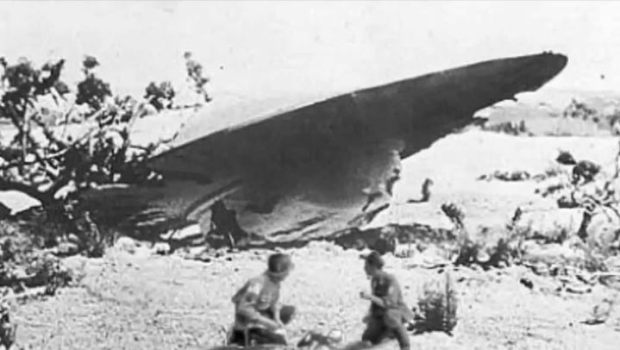 It all started on June 25th, 1947 when a pilot named Kenneth Arnold reported seeing several objects while flying near Mt Rainier, Washington. His descriptions of the objects that flew like “geese” and moving “like a saucer would if you skipped it across the water” became the term “Flying Saucers”, and thus the age of the UFO was born.

Many newspapers in the country picked up the story from the wire services, and the publicity gave birth to a rash of Sightings that kept the papers and the public fascinated throughout that summer… and indeed, to this day. One of those Sightings happened on a ranch outside Corona, New Mexico.

Early in July, 1947, after hearing about Arnold’s “flying saucers”, ranch foreman Mac Brazel told the Sheriff of Chaves County about some strange material he had found on the Foster Ranch, and that he was sure it was the remains of a “flying disk”. Sheriff Wilcox passed this information on to the Roswell Army Air Force base and the base intelligence officer, Major Jessie Marcel, was immediately detailed to look into the matter.

On July 8, “RAAF Captures Flying Saucer on Ranch in Roswell Region” was the top story in the Roswell Daily Record. But was it true? On July 9, an Air Force official clarified the paper’s report: The alleged “flying saucer,” he said, was only a crashed weather balloon.

However, to anyone who had seen the debris (or the newspaper photographs of it), it was clear that whatever this thing was, it was no weather balloon.

The correction did eventually quell most of the speculation, and by the end of the week, the story had, for the most part, disappeared from the news. By the end of the year, the Roswell Incident had slipped into obscurity, destined to be no more than a footnote in the annals of UFO literature- until 1978, when Stanton Friedman, an unemployed scientist and part-time UFO lecturer, was prompted to revisit this obscure event.

On Feb 21, 1978, Stanton Friedman was in Baton Rouge, La after giving a lecture on UFOs and interviewed a man over the phone that said that he had handled the wreckage of a crashed spaceship. Friedman found it difficult to get excited about this story (page 12, Crash at Corona) but did a little checking. This was made harder because Jesse Marcel, the man who made the claim, couldn’t remember either the month or even the year of the event.

It was one year later, Feb 10, 1979, that William Moore found the clippings of the affair referred to by Jesse Marcel, and his and Friedman’s interest suddenly became very active.

Their research started the saga that has made Roswell the most celebrated case ever in the literature of UFOs.