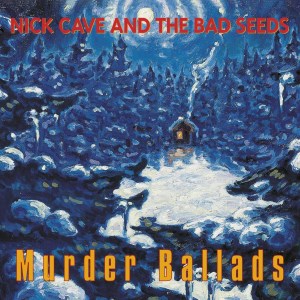 Many years ago I bought an Album by Nick Cave and the Badseeds called Murder Ballads.

And ever since I have been intrigued by the contrast the soft smooth tones of a ballad combined with the description of one or more heinous crimes. These Murder Ballads are not only done by Nick Cave but also other artists from a wide range of musical genres. In this piece I will be highlighting a few of them.

Starting off with one of the most famous Murder Ballads from the aforementioned album.

This is the Hüsker Dü classic ‘Diane’ but performed by Therapy? from Northern Ireland

Staying on the emerald isle “the Long black veil”by the Chieftains with their partner in Crime, Mick Jagger.

The Louvin Brothers, “Knoxville Girl”Perfect harmonies describing a vicious killing is sort of like china dolls: beautiful and creepy.

“Goodbye Earl” is a true murder ballad performed by women, for a change, that shocked the country airwaves in 2000. The lyrics and video leave little to the imagination: Wanda is beat up by her husband, Earl, just two weeks after their wedding. Mary Ann flies to her rescue and helps plot Earl’s demise: death by poisoned black eyed peas.

“I Don’t Like Mondays” is a song by Irish band The Boomtown Rats that was a number one single in the UK Singles Chart for four weeks during the summer of 1979,and ranks as the sixth biggest British hit of 1979.Written by Bob Geldof, it was the band’s second number one single. Geldof,  wrote the song after reading a telex report at Georgia State University’s campus radio station, WRAS, on the shooting spree of 16-year-old Brenda Ann Spencer, who fired at children in a school playground at Grover Cleveland Elementary School in San Diego, California, US on 29 January 1979, killing two adults and injuring eight children and one police officer.

Tom Waits – “Two Sisters”One of the original murder ballads, this song can be traced back to 1656 and it’s spawned a huge range of variants, continuations and elaborations through the years as it spread. The basic story has never changed, though, from two sisters going down to the water and the older drowning the younger. Whether she intentionally drowned her sister or just pushed her in and refused to help her out is one source of debate, as is the motive; sexual jealousy or a shared suitor is the most common theme to come out of the various versions of this song, and occasionally it won’t be mentioned at all. When the drowned body surfaces, the bones are used to make a harp with the hair for the strings, which can then be used to play this song. Circle of life.

Jimi Hendrix – “Hey Joe” Made famous by Jimi Hendrix, “Hey Joe” was a song written by Billy Roberts about a man who heads to Mexico after killing his wife. The most chilling part of the song, especially in the Hendrix version, is the matter-of-fact nature of stating the intentions here: “I’m goin’ down to shoot my old lady. You know, I caught her messin’ around with another man.”

A time-tested classic, “Frankie & Johnny” is one of many murder ballads to take its subject matter from true events. The most story the song is reportedly occurred when Allen Britt won a slow-dancing competition in St. Louis, 1899. The problem was that he won it with a woman that wasn’t Frankie Baker, his girlfriend, and she was waiting for him when he got home in the early hours of the morning. Frankie shot Albert in the stomach, and he died four days later from the injuries. After her trial, the song “Frankie & Johnny” was composed.

The song is one of the most widely distributed traditional songs in folk music because of how many great American artists have covered it in one way or another over the years. Elvis Presley, Johnny Cash, Bob Dylan have all taken it on, as well as instrumental versions from Louis Armstrong and Duke Ellington. The best version, however, belongs to Leadbelly.

Finishing up with another track from Nick Cave’s “Murder Ballads” album,”Stagger Lee”about the murder of Billy Lyons by “Stag” Lee Shelton in St. Louis, Missouri at Christmas, 1895.(I apologize for the language)