Why did I use the names of these 2 artists as the title of this blog? Because they had nothing in common.

Well that is not entirely true. Both were born in Mississippi and both died on the 16th of August, Elvis 42 years ago today and Robert Johnson 81 year ago today. Both were pioneers in their music genre.

Also they both shaped my musical taste. It is a simple fact that there will never be any stars of their magnitude again.

Elvis was and is the undisputed King of Rock N Roll.

Whereas Robert Johnson was and is the undisputed King of the Blues.

Both men were legends and met untimely deaths and both were victims of circumstance.

I will not go to deep into their lives because there is nothing more that I can add to their stories. Below are 2 blogs though I have done in the past.

Let’s celebrate their lives with some of their music.

RIP Elvis and Robert. Thank you for the music

Needless to say that 2016 has been a devastating year for the music industry so many iconic artists have died, but one musician that is so often forgotten in this year’s review shows and lists is Lonnie Mack.

Lonnie Mack, the blues-rock pioneer who influenced an entire generation of guitarists like Stevie Ray Vaughan, Duane Allman, Eric Clapton and Keith Richards,died aged 74 on the 21st of April, the same day as Prince.

In his 1963 hit single instrumentals, “Memphis” and “Wham!”, he “attacked the strings with fast, aggressive single-string phrasing and a seamless rhythm style”, to produce a previously unheard sound that was “savagely wild [but] perfectly controlled.

Below are songs of guitarist who were heavily influenced by Lonnie Mack. Some of them he’ll be gigging with up in heaven.

One more from the great man himself

If there would be a King of Blues it probably would be Robert Johnson. He was also one of the first of the ‘Club of 27’ musicians who all died age 27.

I wonder if anyone born after 1990 knows of this musical legend. The blues is no doubt the foundation of Rock N Roll , RNB and Pop music. Anyone who says they don’t like blues basically say they don’t like popular music.

Robert Johnson was and is the influence of guitarists like Eric Clapton and Keith Richards and numerous other guitar virtuosos.

Robert Leroy Johnson (May 8, 1911 – August 16, 1938) was an American blues singer-songwriter and musician. His landmark recordings in 1936 and 1937 display a combination of singing, guitar skills, and songwriting talent that has influenced later generations of musicians. Johnson’s shadowy and poorly documented life and death at age 27 have given rise to much legend, including the Faustian myth that he sold his soul to the devil at a crossroads to achieve success. As an itinerant performer who played mostly on street corners, in juke joints, and at Saturday night dances, Johnson had little commercial success or public recognition in his lifetime.

Legend or myth has it that Robert Johnson sold his soul to the devil when he met him at a crossroads.

People say, that the crossroads where Robert Johnson made the pact with the devil is in Clarksdale where Highway 49 intersects with Highway 61. But, as can be seen from the events described above, that’s not the case. The crossroads, the one and only crossroads, where the Delta Blues emerged as a manifest entity in the person and music of Robert Johnson is at the south end of Rosedale where Highway 8 intersects with Highway 1. This will be disputed, as some people will dispute that Robert Johnson ever even made a deal with the devil. 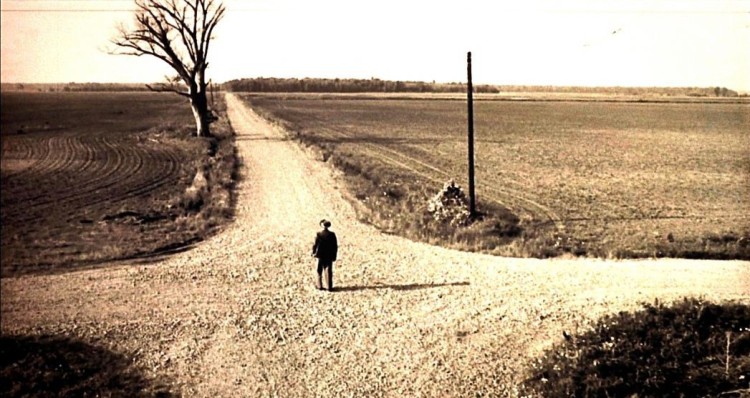 This is what the devil supposedly offered him

“You just another guitar player like all the rest, or you want to play that guitar like nobody ever played it before? Make a sound nobody ever heard before? You want to be the King of the Delta Blues and have all the whiskey and women you want?”

“You know where you are, Robert Johnson? You are standing in the middle of the crossroads. At midnight, that full moon is right over your head. You take one more step, you’ll be in Rosedale. 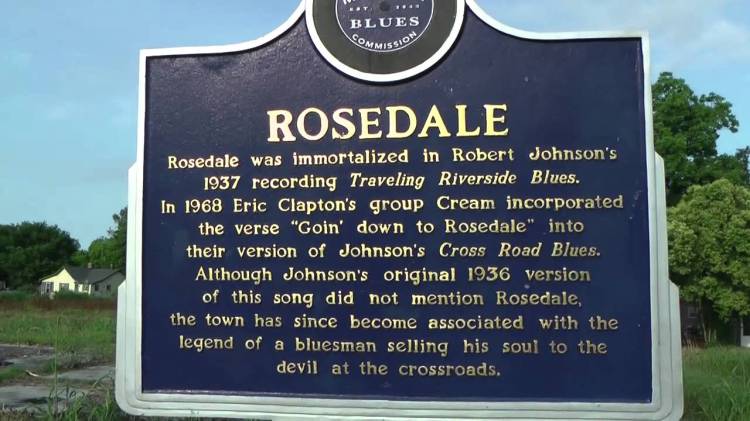 You take this road to the east, you’ll get back over to Highway 61 in Cleveland, or you can turn around and go back down to Beulah or just go to the west and sit up on the levee and look at the River. But if you take one more step in the direction you’re headed, you going to be in Rosedale at midnight under this full October moon, and you are going to have the Blues like never known to this world. My left hand will be forever wrapped around your soul, and your music will possess all who hear it. That’s what’s going to happen. That’s what you better be prepared for. Your soul will belong to me. This is not just any crossroads. I put this “X” here for a reason, and I been waiting on you.” Robert Johnson rolls his head around, his eyes upwards in their sockets to stare at the blinding light of the moon which has now completely filled tie pitch-black Delta night, piercing his right eye like a bolt of lightning as the midnight hour hits. He looks the big man squarely in the eyes and says, “Step back, Devil-Man, I’m going to Rosedale. I am the Blues.” The man moves to one side and says, “Go on, Robert Johnson. You the King of the Delta Blues. Go on home to Rosedale. And when you get on up in town, you get you a plate of hot tamales because you going to be needing something on your stomach where you’re headed”

Obviously we will never know if he did indeed sell his soul to the devil but the fact that within 6 months after this meeting he had gone from a mediocre musician to a virtuoso guitarist does fuel the speculation that his soul did belong to Beelzebub himself.

Of course then we have the elusive 30th song. Robert Johnson only recorded 29 songs but legend has it, he had written a 30th song and never released it. This song was part of the deal with the Devil, he was supposed to have written this for ‘the man at the Crossroads’

This song is also the subject of the 1986 Walter Hill movie called “Crossroads”. In my opinion the movie wasn’t great but it has one of the best soundtracks ever. 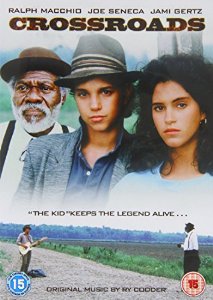 Johnson died on August 16, 1938, at the age of 27, near Greenwood, Mississippi of unknown causes. Several differing accounts have described the events preceding his death. Johnson had been playing for a few weeks at a country dance in a town about 15 miles (24 km) from Greenwood. According to one theory, Johnson was murdered by the jealous husband of a woman with whom he had flirted. In an account by fellow blues legend Sonny Boy Williamson, Johnson had been flirting with a married woman at a dance, where she gave him a bottle of whiskey poisoned by her husband. When Johnson took the bottle, Williamson knocked it out of his hand, admonishing him to never drink from a bottle that he had not personally seen opened. Johnson replied, “Don’t ever knock a bottle out of my hand.” Soon after, he was offered another (poisoned) bottle and accepted it. Johnson is reported to have begun feeling ill the evening after and had to be helped back to his room in the early morning hours. Over the next three days his condition steadily worsened and witnesses reported that he died in a convulsive state of severe pain. Musicologist Robert “Mack” McCormick claimed to have tracked down the man who murdered Johnson and to have obtained a confession from him in a personal interview, but he has declined to reveal the man’s name.

While strychnine has been suggested as the poison that killed Johnson, at least one scholar has disputed the notion. Tom Graves, in his book Crossroads: The Life and Afterlife of Blues Legend Robert Johnson, relies on expert testimony from toxicologists to argue that strychnine has such a distinctive odor and taste that it cannot be disguised, even in strong liquor. Graves also claims that a significant amount of strychnine would have to be consumed in one sitting to be fatal, and that death from the poison would occur within hours, not days. Johnson’s contemporary David “Honeyboy” Edwards similarly noted that the poison could not have been strychnine, since Johnson would have died much more rapidly, instead of suffering for three days.

“I talked with the white man on whose place this negro died and I also talked with a negro woman on the place. The plantation owner said the negro man, seemingly about 26 years old, came from Tunica two or three weeks before he died to play banjo at a negro dance given there on the plantation. He stayed in the house with some of the negroes saying he wanted to pick cotton. The white man did not have a doctor for this negro as he had not worked for him. He was buried in a homemade coffin furnished by the county. The plantation owner said it was his opinion that the man died of syphilis”

Robert Johnson may have died a long time ago but his music still lives on. 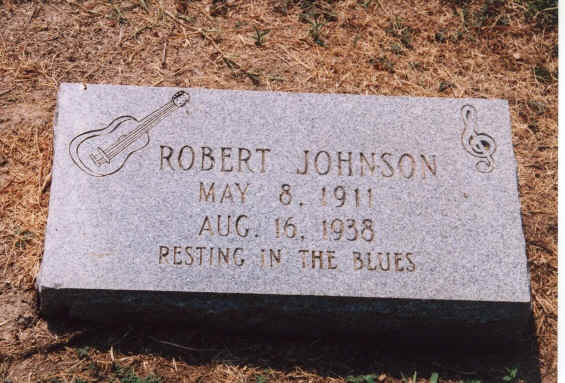 All that rests for me to do is to end this blog with one of his legendary songs.